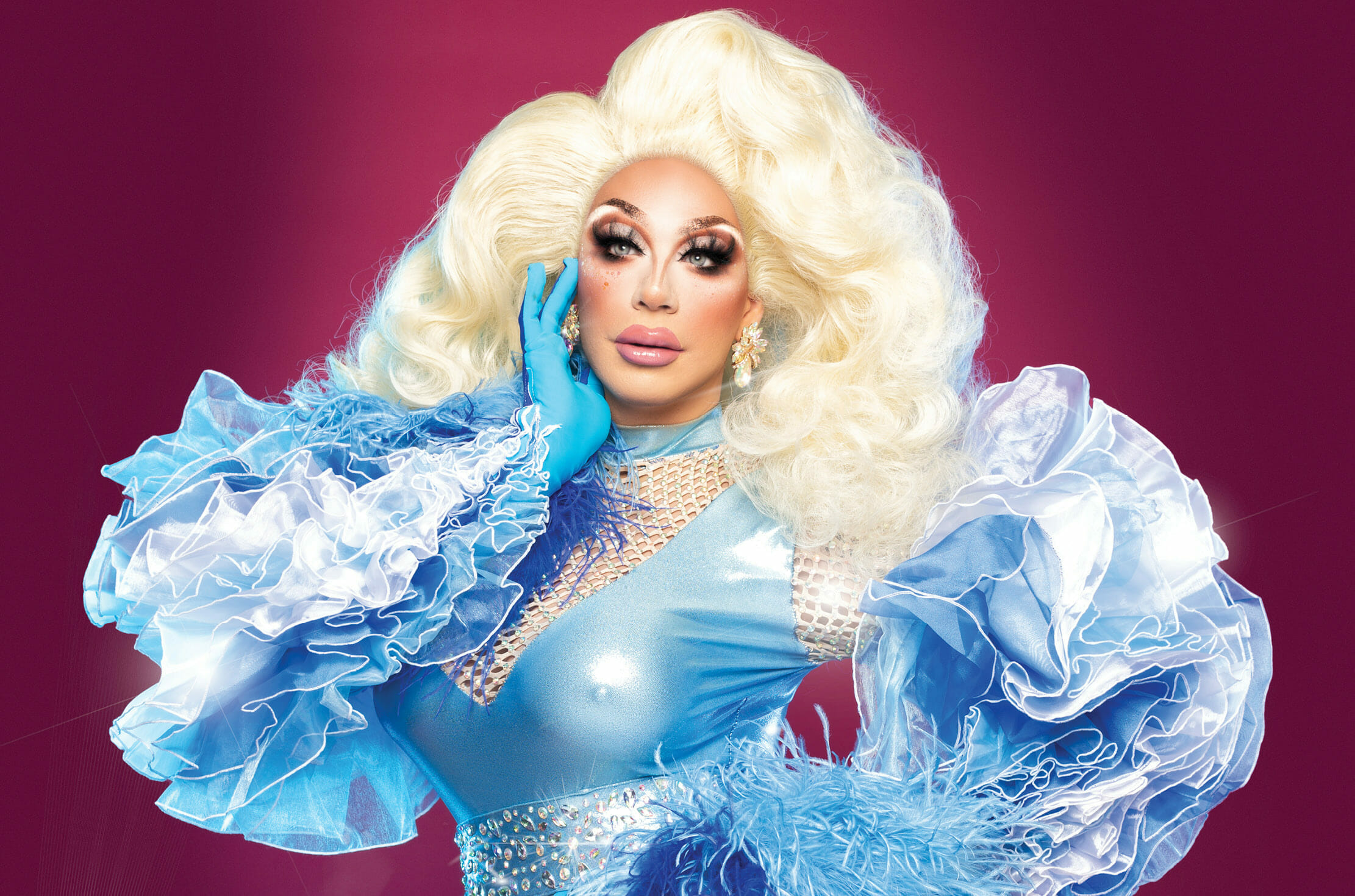 Loud, proud, and living her authentic self, London Adour fell into the art of drag in August 2012 and never looked back. Originally from Houston, Texas, she headlined as a showgirl at the infamous Piranha Nightclub for six year in Las Vegas before recently making the move to South Florida. Now, she is a resident performer at Georgie’s Alibi Monkey Bar in Wilton Manors, and is the host of Thursday night’s What’s on the Radio Now show. When it comes to Adour, always expect the big and bold.

She took some time to answer some questions for OutClique.

Denny Patterson: Can you begin by telling us how you discovered your passion for drag?
London Adour: I met somebody on Grindr who had a half boy-half girl picture, and I remember messaging them and saying how I thought their makeup was cool. They said, ‘thank you, I do drag.’ I was like, what is that? They were like, ‘I dress up in costumes, lip sync, and dance.’ I thought that was so weird and interesting. He invited me to this amateur contest in Houston, that’s where I’m from, and I was like, I guess I’ll go. I went, and after I saw the first performer, I thought it was the coolest thing. I was completely attracted to the concept of drag and performing.

DP: You are the host of Alibi’s What’s on the Radio Now show on Thursdays. What do you specifically enjoy the most about this show, and how did it begin?

LA: Trey, one of the managers at Alibi, offered me my own night and he told me to come up with a concept. In general, my drag is very new age. I do enjoy older school drag in many ways, such as fashion and music taste, but in a lot of ways, my drag is very new and right now. I also like to include that with my music. I fully believe that anything on the Top 40 is on the Top 40 for a reason. It wouldn’t be on the radio if people didn’t absolutely love it. So, I believe that you have a better chance at entertaining an audience, making more money, and ensuring the fact that people are going to enjoy the music if you perform something that is on the radio and brand new. With that concept, I originally wanted it to be called On the Radio, but that’s a song by Donna Summer, so I didn’t go with that because that defeated the purpose of the show. Trey was like, we can do What’s On the Radio Now, and we went with it.

DP: What makes Alibi worth checking out?
LA: I believe that Alibi has this warm, homey feel when you walk in that is immediately comforting. I can’t really explain it. Coming from Las Vegas, everything was loud, bright, and showgirly, and here, it’s a lot more warm and chill. They also have drink specials. They don’t have that in Vegas [laughs].I think people should add Alibi to their night out because it’s right on The Drive and it’s famous. They have drag shows seven days a week, sometimes three shows in one night with different casts.

DP: Speaking of Las Vegas, can you talk about how you used to perform as a showgirl on the Strip?
LA: I headlined on the Strip for six years at Piranha Nightclub, and just loved how I always found myself meeting someone famous. I met Janet Jackson a couple of times, backup dancers for J.Lo and Britney Spears would come party with us, Sam Smith, people from Glee, and I also enjoyed meeting people who were visiting from different countries. I would always get on the microphone and say, ‘where my locals at?’ It would be, like, eight people. Then I’ll ask who’s visiting from out of town, and it would be the whole room. It was the coolest thing.

DP: What can one always expect from a London Adour performance?
LA: Rhinestones, big hair, and big costumes!

DP: There are hundreds of South Florida drag queens. What makes London Adour unique and stand out from the crowd?
LA: I am so different. There is nobody like me. I am truly one of a kind because my stage presence is so alluring and my wigs are so big. I can literally hear people gasp when I walk by. Everybody wants my costumes, and I do sell them sometimes in the show. I’ll sell them to the girls that I work with. One thing that is unique about me is that before, in between, and after the show, you can always find me in the crowd talking to people. I love to mingle, get to know people, and make sure they’re having a good time.

DP: How would you say you are constantly evolving to become a better queen and entertainer?
LA: Truly, by my surroundings. I travel a lot. I have performed in 25 states, and I find myself being inspired and reinventing my aesthetic left and right every time I’m able to work with new drag queens, see their style, go to different cities, and get the aesthetic from their drag community and wherever I’m visiting. In a way, moving to South Florida reminds me of when I used to live in Texas. There is a certain homey, family feel about South Florida, and I used to get in Houston. There is a fun spark here, and we’ll see how my drag changes and evolves as I progress in the city.

DP: What are some of your interests outside of drag?

LA: It’s outside of drag, but also relates to it. I’m a seamstress. So, if I’m not in a show, I am sewing everything I wear. Besides that, if the city permits, I love going to the beach, hiking, camping, anything outdoors. I was a Boy Scout. I also love activities like bowling and going to the movies, and I used to be into photography, which now translates into the  incredible selfies I take.

DP: What are some future goals you would like to accomplish with drag and your platform?

LA:  My goals are to continue traveling around the world. I performed in Paris, and that little taste of being in a different country made me realize I needed to do this more. I need to find a way to market myself, travel more, and grow my experience.

DP: Before we wrap up, is there anything else you would like to mention or plug?

LA: I just want to say, I am honored to receive recognition in Wilton Manors and Fort Lauderdale. I’m a new transplant and I feel so welcomed by the queens in the community. Also, for the first time ever, I’ve lived in several complexes, my downstairs neighbors came and knocked on my door. They brought me this bouquet of flowers that had to be around $150. They just said, ‘welcome to the neighborhood.’ I just wanted to cry. Like, what gay movie am I in? [Laughs].  I have truly enjoyed my move so far, and I can’t wait to see what happens next.

Stay up-to-date and connect with Adour by following her on Instagram @londonadour.