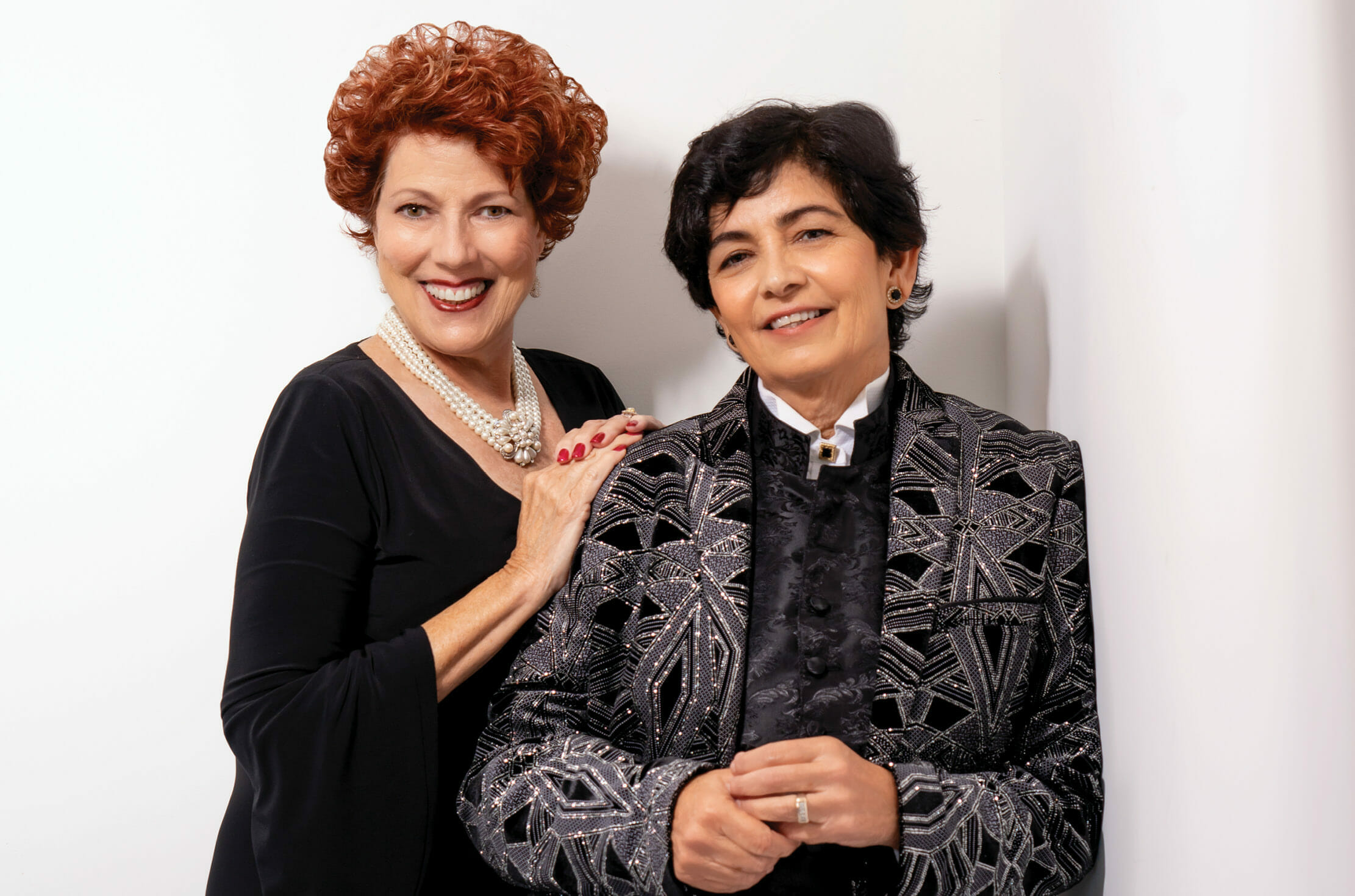 Being a leader poses many challenges, but working alongside your significant other in a professional setting is the most unique of them. Yet, despite, or even because of the challenges, the bond between South Florida Symphony Orchestra’s (SFSO) driving forces, Maestra Sebrina

Alfonso and CEO and President Jacqueline Lorber, have become even stronger.

Guided by the belief that music is pivotal to community engagement, the SFSO has become a superlative cultural institution serving all of South Florida. Alfonso founded the organization in 1997.

“Originally conceived as the Key West Symphony, the orchestra brought beautiful classical music to my hometown community,” she explains. “I am a sixth-generation ‘Conch’ from Key West. When I began my studies at the Peabody Institute in Baltimore, Maryland, I created orchestras and presented concerts for the community, as well as educational experiences for children. That was when I realized the exposure to this beautiful art form was not available to me as a child growing up in Key West. That inspired me to replicate that model for the residents and visitors of the Keys.”

The Key West Symphony was a hit, and the concerts became a much-anticipated activity on the islanders’ social calendars each winter season. Friday and Saturday night performances were sold out, and on the Wednesdays leading into the concerts, the orchestra performed for children.

When the Florida Philharmonic Orchestra disbanded, Alfonso began to think about expanding the footprint of the organization.

“There was a gaping hole in the musical landscape on the mainland, and I instinctively knew it was time to bring our style of high-quality programming in Key West to Fort Lauderdale and Miami,” she says.”

Lorber came into the picture in 2009 when she interviewed for the CEO position.

“I told Jacquline to ‘run,’” Alfonso jokes. “She was overqualified, but she insisted she could do the job. She was an award-winning entrepreneur and a successful fundraiser, but most of all, she loved a challenge.”

Regarding their budding romance, Alfonso says there was definitely a mutual attraction, but it was several months before they acknowledged their feelings for each other.

“She definitely played hard to get, which was fun,” she says. “We took it slow, and I enjoyed the chase.”

“We were destined to be together, and we bonded through our dedication to the organization,” Lorber adds. “We were laser focused on expanding the symphony at that time, so our personal life was placed on hold. It is only now that I feel like we are finally able to enjoy the fruits of our labor.”

The two officially said “I do” in August 2015, in Provincetown, Massachusetts.

“We were delighted when several patrons unexpectedly ‘crashed’ the wedding to celebrate with us,” Lorber says.

Because Alfonso and Lorber both share a strong passion for music and community engagement, the SFSO has reached major milestones and record growth. Once considered “the little symphony that could,” it is now recognized as a major cultural institution in Broward County for its commitment to classical music. The SFSO also reaches diverse and underescourced communities, through the groundbreaking “Symphony in the Schools” program, which ties to the music education programs at The Kennedy Center, Carnegie Hall, and school districts throughout the region.

Since its inception, the SFSO has touched and influenced the lives of nearly 100,000 students.

“We have a shared goal and vision,” Alfonso says. “It’s like both of our dreams have combined and complemented each other. She has her strengths, I have mine, and we make beautiful music together. I can honestly say that because of Jacqueline, SFSO has really been able to expand. She works tirelessly and is not afraid to go out, meet people, and promote what we are doing. She truly pours her heart into the SFSO and I am proud of her. Not only has she helped to create something that South Florida can be proud of, but she also continually finds new ways for us to serve the community in the best way possible.”

“Sebrina’s tender heart and her passion for music shines brightly as she mesmerizes audiences at each concert,” Lorber adds. “We all experience a special intimacy brought together by the universal appeal of music. Our mutual love for the arts transcends beyond our relationship into our work environment.”

Like any couple, the pair have encountered their fair share of obstacles, but according to Alfonso, they solve their challenges together and move on.

“We take pleasure in balancing our time together and with our families, especially with our new grandchild,” she says. “We are blessed to work together.”

The power duo’s approach to growth and sustainability has also caught the attention of notable organizations such as the Fort Lauderdale International Boat Show and Tiffany & Co.’s “About Love” campaign featuring Beyonce and Jay-Z.

SFSO has achieved new heights, becoming the go-to orchestra, which includes achieving status as “Partner in the Arts” with the Broward Center’s affiliated venue, The Parker. This came about in recognition of the alignment of the SFSO and the Broward Center’s mission, artistic excellence, and mutual dedication to music education. It is no coincidence that the SFSO’s achievements and accolades are due to the fact that it is one of only a few orchestras worldwide led by women.

Alfonso says this is significant.

“If you think about all the arts organizations in existence, you rarely see a female conductor,” she explains. “It is even more rare to see a female music director alongside a female CEO. I hope this will stand as an example for young women that anything is possible, that they can do anything they want. If anything, I hope we are showing that women can work together because there was a time when a woman wouldn’t hire another woman, or a company would only hire a token woman.”

According to Lorber, when she attended the League of American Orchestras Conference in 2019, she learned of the launch of its nationwide campaign focused on women and diversity in

“This was just a couple years ago, and it was the first time they were talking about women in

leadership positions in orchestras,” she says. “It was astonishing to me. I was thinking to myself,

Check. As for presenting works by women composers, we regularly feature their work, including

the first woman to win the Pulitzer Prize for music, Ellen Taffe Zwilich. Diversity is written in the DNA of the SFSO culture. From day one, the SFSO has embraced diversity in all our ranks. From the orchestra, to composers, to staff – we support their efforts in shining a light on this critical cultural shift. It was validating to know that this had come about organically for us.”

As for the SFSO’s future, Alfonso and Lorber say they have groundbreaking plans.

“We dedicate time for ourselves between the time commitments of the SFSO’s growing initiatives, Masterworks concerts, our education and community engagements, and corporate programs,” Lorber says. “The SFSO has been woven into the cultural fabric of our community with its new endeavors, such as film to live orchestra. With the focus on creative programming and growing audiences, we’ve found the formula to become the ‘orchestra of the future.’”

“The symphony has blossomed,” Alfonso adds. “That is exactly what Jacqueline and I strive for.”

experience. As Lorber proclaims at the start of every concert, “Maestra, let the music begin!” It is this phenomenal music that creates a more beautiful culture for us to experience.

Bach, Beethoven, Handel, Tchaikovsky, Mendelssohn, and so many other composers are honored by what the SFSO brings to the amazing South Florida community.