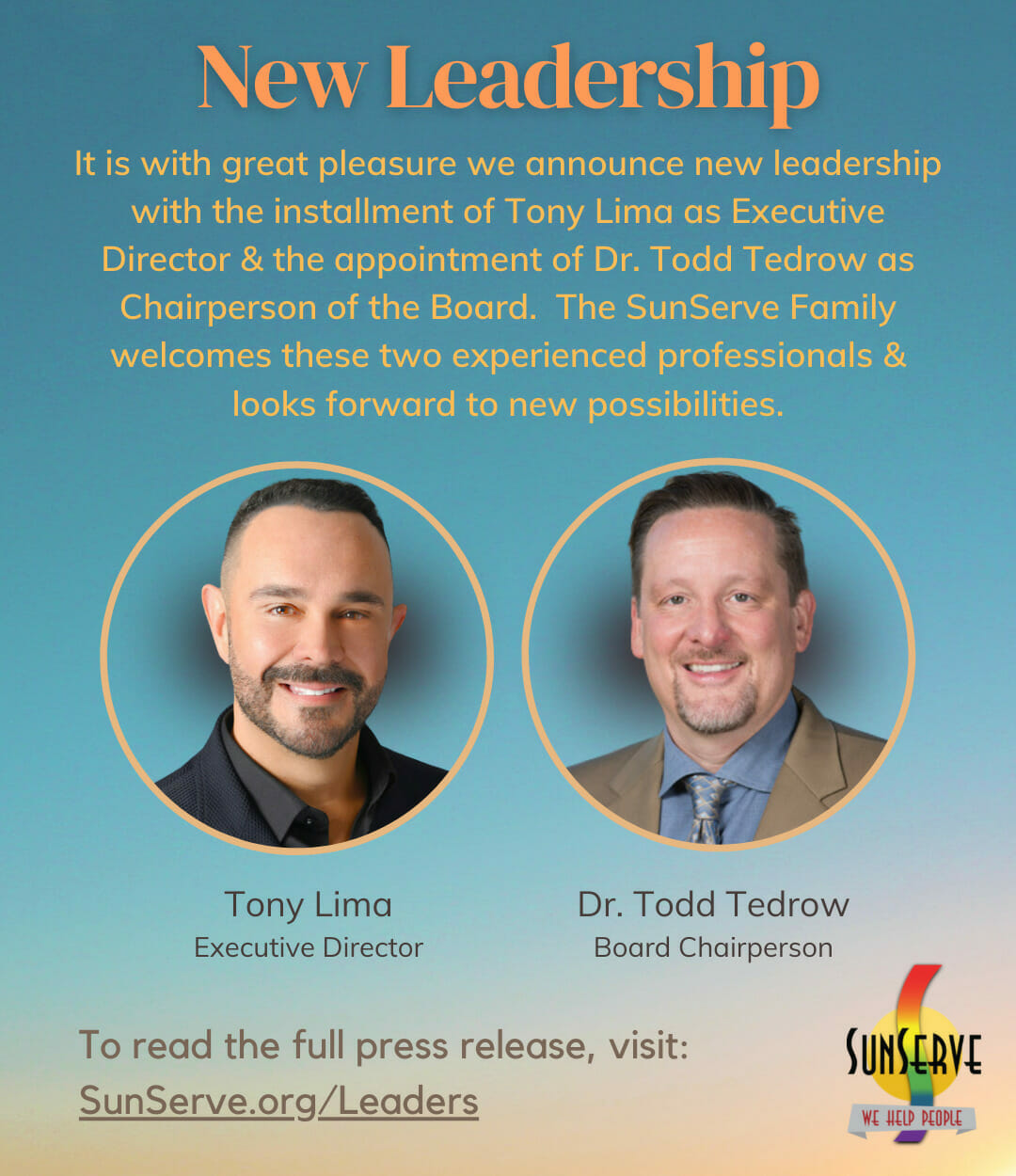 SunServe‘s Board of Directors announced new leadership changes with the installment of Tony Lima as Executive Director of the agency and the appointment of Dr. Todd Tedrow as Chairman of the Board. SunServe opened its doors in 2010 and quickly became a pioneer in LGBTQ+ competent mental healthcare and social services. It remains the go-to nonprofit agency in South Florida and serves thousands of clients each year. SunServe’s programs offer support in Mental Healthcare, Youth and Family Services, Transgender Care, Housing Case Management, Substance Use Recovery, and Senior Care.

Tony Lima will assume the role of Executive Director of SunServe, effective November 1, 2021, and is uniquely qualified for this position. He has more than 20 years of experience leading community organizations in the nonprofit sector. Tony is already a well-recognized name in South Florida for his previous contributions managing two other major organizations that, like SunServe, focused on LGBTQ+ individuals in need. Most recently, Tony served as Chief Executive Officer to Arianna’s Center/Translatina Florida, a nonprofit advocacy and social services organization with offices in Florida and Puerto Rico focused on uplifting the most marginalized within the LGBTQ+ community focus on transgender women of color. In that capacity, Tony was tasked with developing and overseeing the organization’s strategic vision and creating and implementing the fundraising strategy while expanding the reach and scope of services provided. Tony has also been a sought-after bilingual thought leader on LGBTQ+ issues for media and educational/advocacy forums at the local, state, and national levels.

Before serving as CEO of Arianna’s Center/Translatina Florida, Tony honed his leadership skills and affected real political change as the Executive Director of SAVE (Safeguarding American Values for Everyone). Under Tony’s leadership for six years, SAVE, Florida’s longest-serving LGBTQ+ advocacy organization, secured the most significant political victories in the organization’s 26-year history – including when SAVE successfully sued the state of Florida in 2015 to legalize same- sex marriage and when SAVE passed comprehensive nondiscrimination protections for transgender individuals at the Miami-Dade County Commission in 2014. During his tenure, SAVE became nationally recognized in both the journal Science and The New York Times for its groundbreaking prejudice reduction work in transgender equality.

In addition to his many professional accomplishments, the broader community has long praised Tony’s tireless commitment to equality and social justice. In 2012, for example, Latino Leaders Magazine named him a “Top Latino Leader.” In 2013, Brickell Magazine recognized him as a “Top 20 Under 40” community leader. By 2019, Tony had also received the Trans Latina Coalition Ally Award; the Miami Dolphins had honored him with the NFL Hispanic Heritage Leadership Award. SFGN (South Florida Gay News) had named him LGBTQ Activist of the Year for several years consecutively. The national Harvey Milk Foundation and The Pride Center honored him with a Diversity Honors Award. In 2020, he was included in the Florida Hispanic Chamber of Commerce’s TOP 50 Professionals in the State list. He was honored by TransInclusive Group, The Pride Center, and the Florida Department of Health with the Bishop S.F. Makalani- Mahee Transgender Ally of the Year Award. In 2021, Telemundo featured Tony in the Unstoppable Pride media campaign in celebration of Pride Month. Tony currently serves on the inaugural Miami-Dade County LGBTQ Advisory Board and is a lead anchor on the popular internet-based programs: Queer News Tonight and TRANSlation, part of the HotSpots, WMEG (Wilton Manors Entertainment Group), and Happening Out Television Network umbrella.

“It is an honor to take on this new role at SunServe, and I look forward to building the trust and serving all who seek our services and assistance. We are here to serve and welcome every opportunity to strengthen the ties that bind us”, said Lima.

Other areas of change for SunServe include the transition of Dr. Todd Tedrow from Secretary to his new position as Chairman of the Board, which occurred on October 1, 2021. Todd, a professor of Social Work at Barry University, comments, “Tony brings decades of experience in working with some of the most marginalized people in our LGBTQ+ community, and he perfectly encapsulates SunServe’s commitment to diversity and offering services of the highest quality to all. This is an important step forward for the organization and its continued efforts to build trust, collaborate, and be transparent in all of the life-affirming and uplifting work it provides to our many communities.”

Indeed, the appointment of Tony Lima as Executive Director and Dr. Todd Tedrow as the new Chairman of the Board signal the organization’s unwavering commitment to offering our broad and diverse community the very best in care, treatment, and solidarity. SunServe looks forward to continued accomplishments serving economically disadvantaged, marginalized youth, adults, and seniors in the greater South Florida metropolitan area.

Timeframe to Use Portability Extended