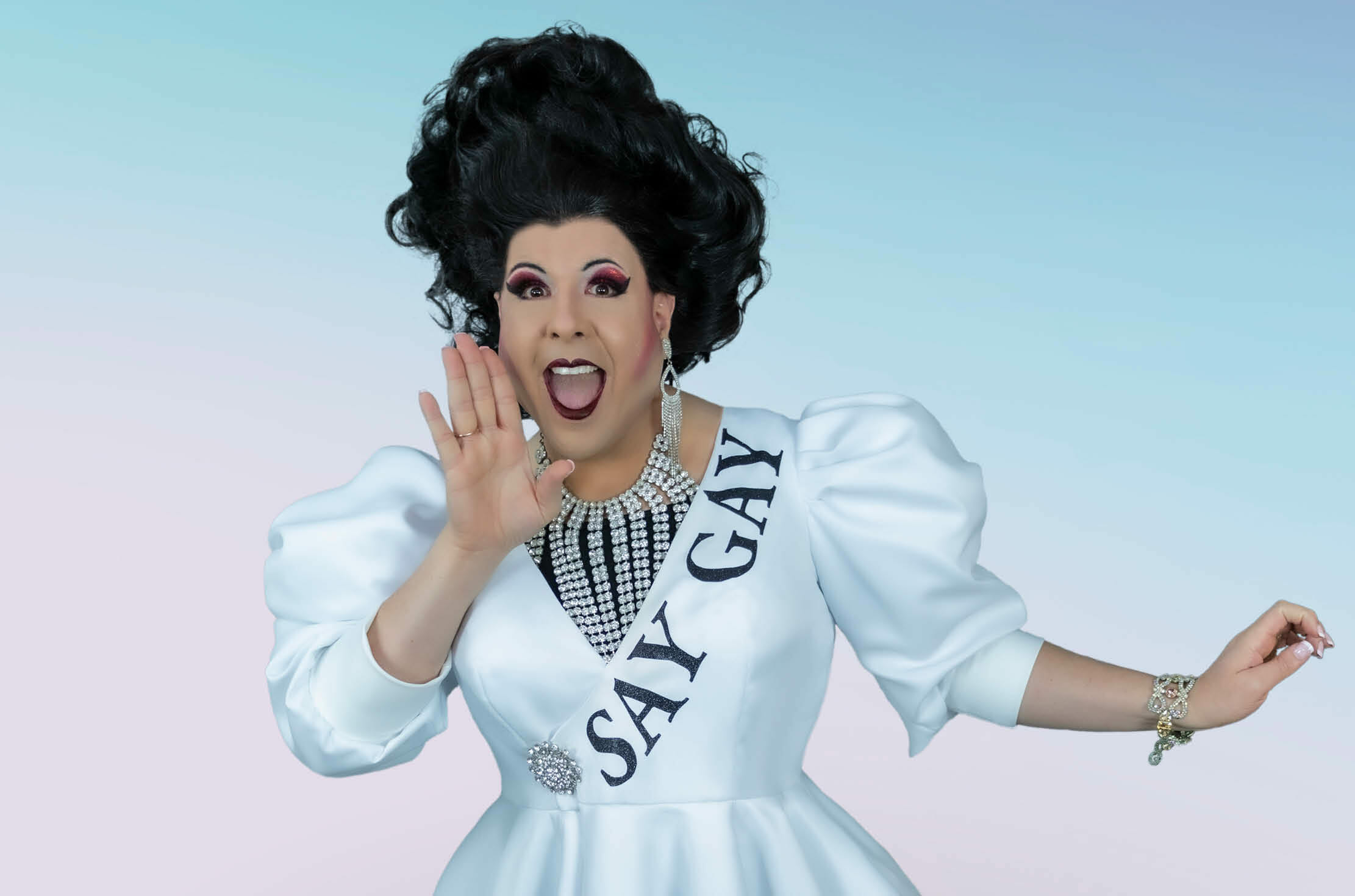 In November 2020, South Florida was introduced to live-singing drag queen Miss Minnie Faye Bouvèé as she made her debut at Matty’s on Wilton Drive located in Wilton Manors. Since then, she has been taking the cabaret industry by storm and was featured on our February 2021 cover. We caught up to see how things have been going for her since then and what projects she has in store for us.

OutClique: How have things been for you?

Miss Bouvèé: Oh my goodness, booked and blessed as they say. I scaled back on some cabaret and traveled a bit because my body and voice were struggling to keep up. It’s a lot to stand up there and be funny for three hours, let alone sing constant showstoppers like Whitney Houston and Wicked. Also, keeping an audience interested in you for three hours a night is werq! You know, I grew up on a theatrical stage. We had a script to help. Not so in cabaret!

OC: Speaking of theater, you just finished a successful run of your original show Double Trouble in February 2022 with cabaret leading lady Jennifer McClain. How do you feel about that and will there be more?

MB: Jennifer McClain and I had so much fun on that stage at every performance. Double Trouble really was the first step I took into independently producing. It was a personal challenge and I absolutely hope to continue doing it. Double Trouble itself will see additional runs in other cities this summer. I would consider running it again here, but we have other shows we want to do.

OC: Oh really? Tell us about that!

MB: Oh, an OutClique exclusive! [Laughs]. Well, I can tell you that after the success of Minnie Behind Bars in the fall of 2021, we do have another murder mystery coming. We have an entirely new script, a cast of five, and a hilarious “Who done it?” plot coming this way. The playwright will be Robert Leleux who wrote both Minnie Behind Bars and Double Trouble. We will have info on that in the early fall.

OC: You have been traveling a lot for your cabaret gigs. Do you have a favorite location?

MB: That’s a hard question to answer because I genuinely love and deeply invest in my audiences everywhere. I think each place has something unique that I do enjoy though. Fire Island has such a queer history and a great mix of people. Key West is island life and always has such positive vibes. Naples is such a unique venue and location. The audience there has become so very dear to me. Detroit is the Kansas to my Dorothy. There’s no place like home, and the people who Miss Bouvèé first entertained. Wilton Manors is like Gay Disney, but this little slice of heaven has a pulse that makes my heart quicken. It challenges me, and most of all, it supports me. For that, I am so grateful.

OC: Speaking of challenges, you announced back in December 2021 that you are making a full length feature film this year. How is that going?

MB: It’s moving along at a healthy pace. Making a film, I am finding, is very, very, very different from producing theater. A single show in theater may take 10-20 weeks to go from script, to rehearsal, to performances in front of a live audience. In film, there’s a much longer process to getting it off the ground. For example, our script was done in February 2022, but we won’t begin filming until November. In the meantime, we successfully raised 100 percent of our start up funds of $15,000 through an online campaign and with local fundraisers. I have to thank Matty’s, The Pub on the Drive, and Bambusa (Naples, FL) for their help in that process! It has had its challenges. I am not a patient person [laughs]. I want it done and ready to view, but the director, who is also my co-producer, tells me we are moving forward at a very healthy pace. We will begin filming in November in New Orleans. I guess if it were easy, everyone would do it. Also, I have to thank local gay film/art supporters Marc Martorana and Wilton Manor’s Commission candidate Don D’Arminio. They are opening up their home to host a dinner party for prospective investors and donors in mid-May 2022. They believe in the film, it’s queer niche that it will fill, and are helping it take steps towards succeeding. Don has my vote!

OC: Who is directing and producing the film?

MB: Oh my word, the amazing Erynn Dalton is directing the film. She lives here in South Florida and is really making some momentum in the independent film industry. Her current film going into production before mine has some amazing recognizable names in it. She knows what she is doing and has been a real teacher to me already. She is also co-producing it with me. The screenplay is by my longtime writer, Robert Leleux.

OC: What’s the film about?

MB: Set in the steamy underworld of the New Orleans French Quarter, this is a tale of horror, murder, mayhem, and sisters – one good and one evil – torn between their love for one man.  With show-stopping original musical numbers, a battle for territory with the infamous Poodles Makenzie requires the Bouvèé sisters to set aside their differences and work together to become Big Easy Queens! This film takes audacious inspiration from the Grand Guignol, camp-horror films of the 60s and 70s like Whatever Happened to Baby Jane,

MB: I can share two so far, myself excluded. The role of Poodles Makenzie will be played by Jennifer McClain and the role of Amos/Varla will be played by Jeffery Roberson Loe, known to most as Varla Jean Merman. We have others in the workings, but I can’t really announce until their deals are finalized. It’s been very, very exciting to see it all come together!

OC: What’s been the most challenging part about making a film so far?

MB: Well, exercising as much patience as possible would be a start. Along with that; my learning curve having been a stage actor and stage producer my whole adult life. This is new territory for me. Fundraising would probably take the cake though. We were so lucky to secure the start up funds, but talking to investors is not my strong suit. This is where Erynn has been key in our steps forward. She has a real understanding of the business aspects of film and investing and has done this for several films already. I really have to lean on her and learn. Someone once told me, ‘In show business, if you don’t know anything about business, you’ll have nothing to show.’

OC: When will we be able to see the film?

MB: First off, with so many South Floridians already involved, we do hope to have the big premiere here. Whether that is in a film festival or its own event, that depends on the timeline in post production. Again, something I have to exercise patience in. It takes about six months or more in some cases to edit, close caption, format, and finish the film. So, depending on how quickly those facets of the film can be finished once filming wraps, that will determine when the film will be premiered and ultimately shown, hopefully nationwide or distributed, whether physically or streamed. There are just a lot of factors, but we are hoping that by Pride season 2023 or by Halloween 2023, we will have a film you can all enjoy!

OC: That is all so exciting! Why do you think this film is important in queer culture?

MB: There are some romantic comedies that will enter queer canon now like Single All The Way, camp classics like Die. Mommie, Die, comedies like Too Wong Foo, musicals like Rocky Horror Picture Show, and even drag dramedies like Priscilla Queen of the Desert, but our film fills a void. The niche of horror, camp, comedy is slim and has almost no queer actors, storylines, or queer producers. This film is fun and unique and could help to redefine queer camp horror. I think it’s important to make it unapologeticly queer, especially in our current climate.

OC: What do you mean?

MB: Look, I rarely, if ever, bring politics into my show or brand. I always say that I don’t care if you are left wing or right wing, we are all part of the same bird. However, being queer is inherently progressive. Being in drag is inherently progressive. I do feel that it is an aspect of my job to speak up and out for those that don’t have a voice, or worse, are oppressed or silenced by a majority.

OC: Why do you feel it is important to speak up and speak out?

MB: Drag queens historically have been warriors. In every decade, you would find them at the forefront of our fight for progress and equality. We owe it to our predecessors to carry this tradition on. We can bring excitement and unity to the community. I believe it to be part of the job. Hence, the cover photo for this issue. I understand it to be somewhat controversial, but it’s essential we say gay and say it loud! After all, if you’re not casting a little shade, you’re not standing in the spotlight!

OC: Amen! Thank you for sitting down with us. Where can people stay up-to-date on all things Bouvèé.

MB: I am really working on building up that Instagram following so give me a follow at @MissBouvee. I always post my show advertisements there. Larger projects are always on my website, MissBouvee.com. You can also subscribe to my email list and get an email from me about once a month with announcements and shows!