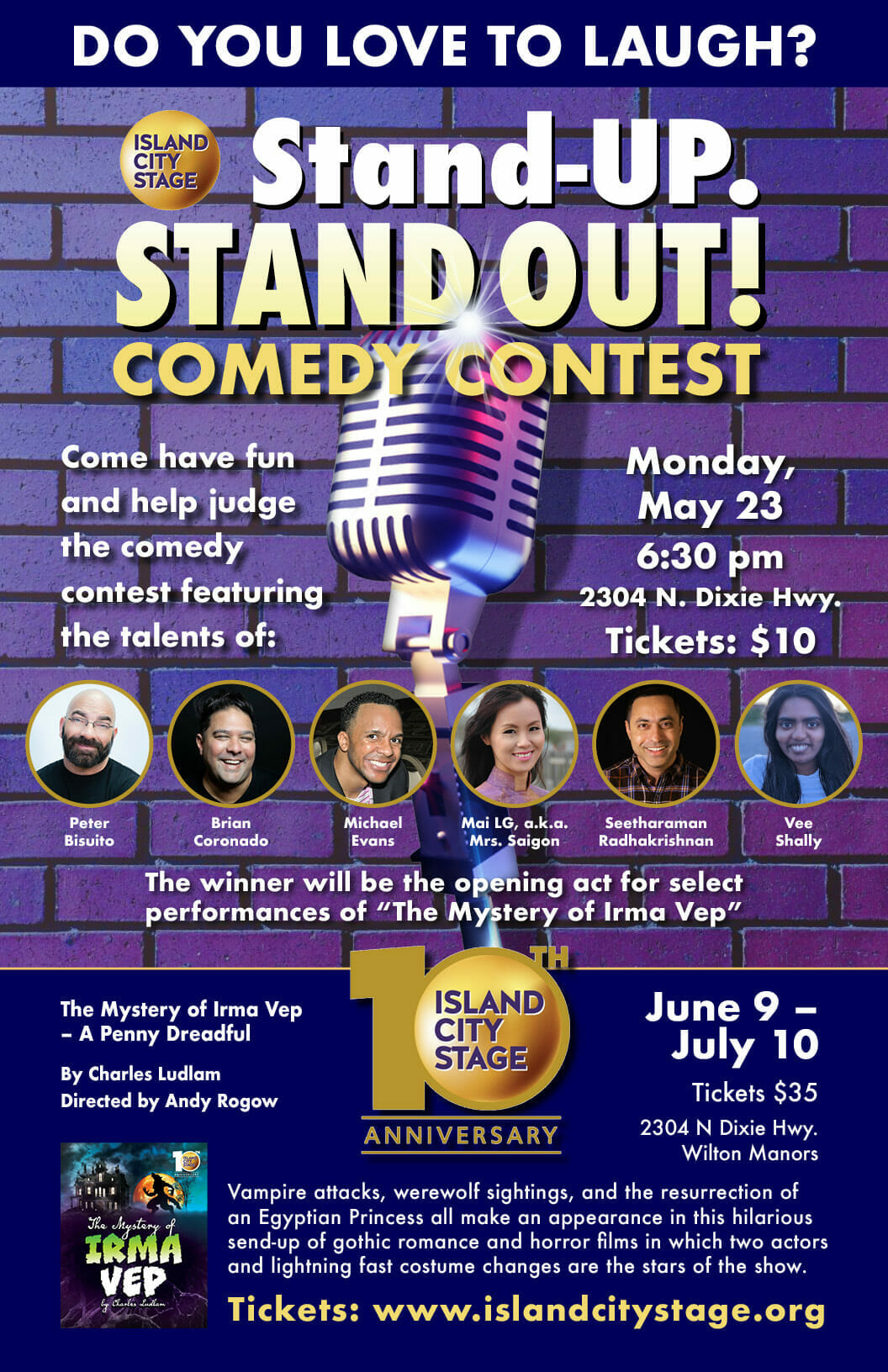 Island City Stage invites the community to listen, laugh and vote for South Florida’s funniest during its Stand-UP. STAND OUT! Comedy Contest in advance of PRIDE Month on May 23, 2022. The theatre company has sought out local comics to test their stand-up shtick in front of a live audience in the hopes of securing a spot to open-up for select shows during the run of the company’s upcoming production of The Mystery of Irma Vep by Charles Ludlam, a comedic horror satire. The Mystery of Irma Vep is part of the award-winning theater company’s 10th Anniversary 2021-22 South Florida Season.

“Charles Ludlam and The Ridiculous Theatrical Company were pioneers, now legends in LGBT+ theater, elevating camp to an art form and paving the way for companies like Island City Stage,” said Andy Rogow, artistic director of Island City Stage. “Our 10th Anniversary Season has brought many firsts to the stage and we’re delighted to add this comedy search to find comedic talent.”

The Stand-UP. STAND OUT! Comedy Contest will feature local comics Peter Bisuito, Brian Coronado, Michael Evans, Mai LG aka Mrs. Saigon and Seetharaman “Seetha” Radhakrishnan and Vee Shally performing at Island City Stage. One winner, chosen by a panel of local celebrity judges including Rod Hagwood, Michelle Solomon and Scott Ryan, plus audience support, will receive a $100 gift card and an opening guest spot role for select performances of “The Mystery of Irma Vep” that runs June 9 – July 10, 2022. A nominal fee of $10 to attend the competition will be donated to Island City Stage.

Show tickets for The Stand-UP. STAND OUT! Comedy Contest are available HERE

Vampire attacks, werewolf sightings, and the resurrection of an Egyptian Princess all make an appearance in The Mystery of Irma Vep, a hilarious send-up of gothic romance and horror films in which two actors and lightning, fast costume changes are the stars of the show.