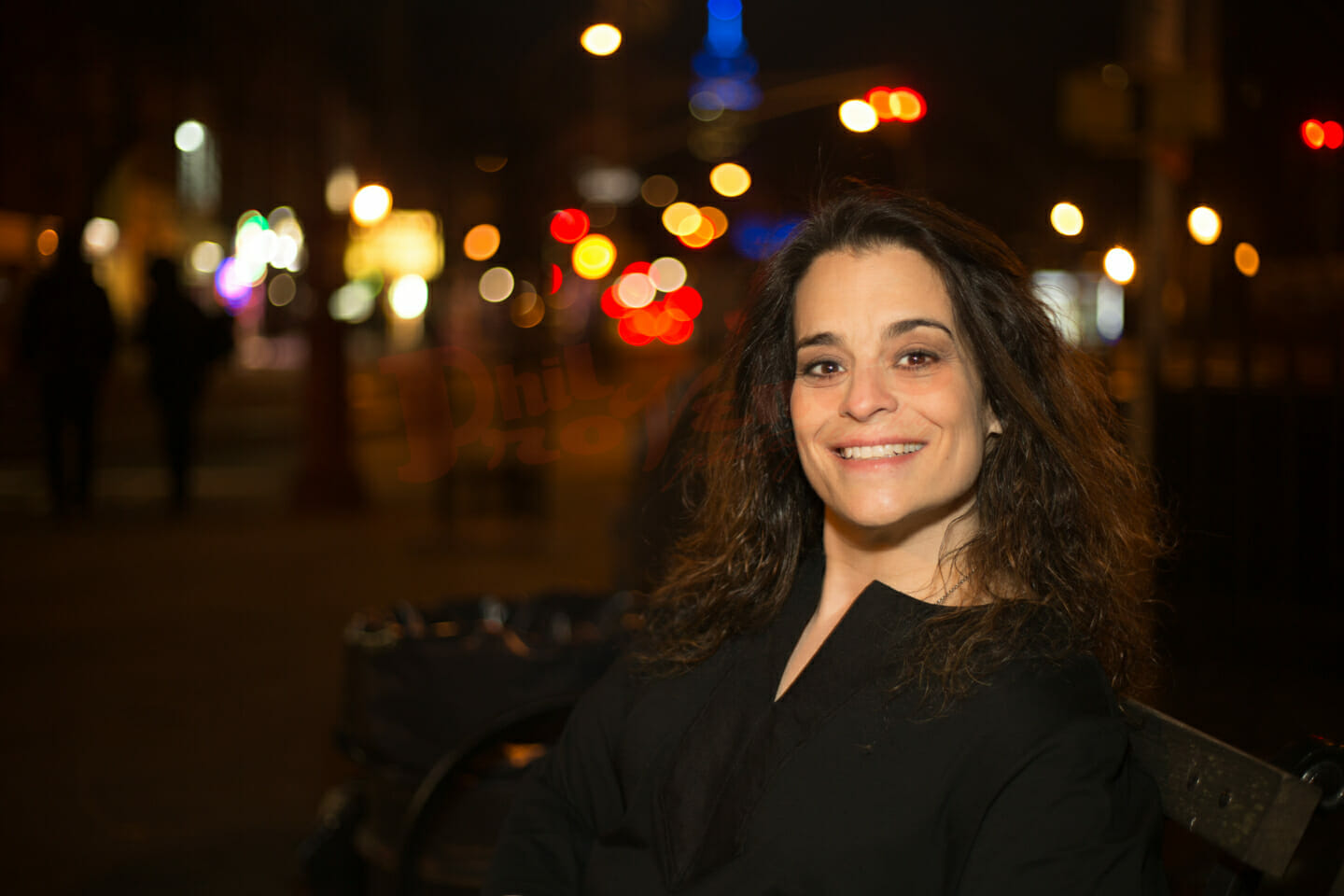 Death and taxes aside, few things in life are certain. However, you can bet on two sure things when you attend a show by out comic Jessica Kirson; you will laugh so much and so hard that you will be in physical pain (but you won’t mind) and you will probably find something offensive in her act (but you won’t mind). More than 20 years into her stand-up career, Kirson remains one of the most refreshing and original comics on the scene. Her elastic face, gift for voices, and personal, reassuring asides (just wait until she turns her back on the audience!) are guaranteed to crack you up. Jessica was kind enough to take time out of her increasingly busy schedule to answer a few questions in mid-March 2021.

Gregg Shapiro: Your family features prominently in your comedy material. How do they feel about being the subject of your jokes?

Jessica Kirson: They don’t care at all. I’m never mean-spirited. I never say anything that I would feel guilty about [laughs]. They’re fine about it. They’ve very much a part of who I am in my humor, so I talk about them a lot. My mom’s a therapist, so there’s a lot of material there.

GS: Do you also include your wife and children in your stand-up, and if so, how do they feel about that?

JK: Yes, I talk a lot about my wife, and I have four daughters from two different women, so I say I’m like a rapper. No one gets upset. I’m never disrespectful. I’m very careful about it. I have a pilot script deal with NBC Peacock about my life, about my whole situation. But, yeah, it always comes from a fun, silly place, so they don’t mind at all.

GS: Your facial expressions in your act are priceless. The confident ugly girl is a perfect example. Do you practice doing them in front of a mirror?

JK: [Laughs] thank you! No, I’ve always been making faces my whole life. Even as a little kid. Someone once showed me a picture of when I was little and I was making a face in the picture. I’ve always done that. I have always been silly and made faces. I was the class clown. Actually, I started comedy more than 20 years ago because my grandmother took me aside and said, “Every time people are around you, they’re always laughing.” She was watching me sit with people in my family at some event or something. She said, “You should be a stand-up comedian.” I’d never thought of it before. I never thought I could do it. I ended up taking a six-week class and trying it. I was very nervous to do it. I had to work through that because I was panicked to be on stage in front of people. But, she was right [laughs].

GS: In your set you’ve mentioned that you do a lot of “shows in Florida for very old people.” In fact, I saw you open for Will and Anthony Nunziata at the Aventura Arts Center in December 2019. You’re going to be performing in South Florida, again, on April 2 & 3, 2021. Are there regulars in Florida that you recognized from coming to your shows?

JK: Yes! One thing I pride myself on with my standup is that I have so many different kinds of fans and different age groups and different races and ethnicities and sexual orientations. I love that! I definitely have an older Jewish crowd that comes to see me and has come to see me for years. It took me a long time to learn how to appeal to different people from different ages and backgrounds. I love seeing people over and over again over the years.

GS: That show in Aventura is a good example because there was an older Aventura kind of crowd, but there were also LGBTQ+ folks in the audience. It’s true, you really are able to navigate both of those worlds.

JK: It’s interesting; they’re not that different. Older Jewish people and Catholic people and gay and lesbian audience appreciate good entertainment and like to laugh and get good humor. So, it’s a similar crowd, believe it or not. They’re the crowds that go to see Broadway and are pretty educated and with it. They’re both good crowds.

GS: Have you found creative ways to continue to perform during the pandemic?

JK: Oh, yeah. I’ve done a ton of Zoom shows. I did two last night, two the night before. I’ve done some outdoor shows. I’ve done rooftop shows. I did a drive-in show. I’ve done very few indoor shows. Those have been more recent and they’re extremely socially distanced. I have to literally walk into the green room, be there alone with a mask on, and then walk on stage and then leave. They’re opening up slowly and I’m being very careful. The clubs in New York are opening April 2nd [2021] to a 33% capacity. Some have been opened the whole entire time around the country, but I haven’t done them. I’ve been pretty careful.

GS: What can you tell the readers about your Relatively Sane podcast?

JK: I started my Relatively Sane podcast because I was doing so much stand up for the past 22 years. I always wanted to do an interview kind of outlet where I could just sit down and really talk to people. Some are hysterical and we’re just laughing the whole time. Some get very deep and they’re about depression and anxiety. I’ve interviewed so many different kinds of people. A ton of comics, some actors, some directors and producers. I just put one out with Laraine Newman from Saturday Night Live. I did one with (comedian and actress) Lea DeLaria. I’m going to be interviewing Bruce Vilanch and comic Pete Holmes. I love getting deep with people, also. That’s a big part of me. I am very silly, but I also love having real conversations and people love that side of me. I really do love doing that podcast.

GS: You produced, and appear in, the upcoming documentary Hysterical. What can you tell the readers about it?

JK: I created it and I pitched it to FX with my manager and a production company. It got picked up and then we picked the comics to be in it. We got amazing people to be in it like Kathy Griffin, Margaret Cho, and Judy Gold. It’s actually premiering online at the SXSW Film Festival. It’s coming out on FX and Hulu on April 2, 2021. I can’t wait for people to see it. It’s the story of female comedians – what we go through, why we got into stand-up, and the different things we’ve had to deal with. Kathy Griffin talks about her whole Trump thing. The girl who did the stand-up in front of Harvey Weinstein is in it, and that’s incredible. I’m very proud of it. I’m actually working on a new documentary which I’m even more excited about. It’s about female comics around the world. On Zoom, I’ve been interviewing female comedians from all over the world. Today I’m interviewing a woman from Jordan. It’s fascinating what these women have to go through. Last week, I interviewed a woman from Dubai. They can’t talk about the Royal Family, they can’t talk about politics or religion or anything. It’s so interesting. I love producing as much as I love performing.

GS: It’s nice that you found another outlet.

JK: Yes, it opens everything up.

GS: I remember watching the 2017 movie The Comedian and when you came onscreen there was finally something funny happening…

GS: …which is what I said in my review. In 2020, you were in the Pete Davidson movie The King of Staten Island. Are there movie roles in the works for you?

JK: I was in another comedy last year called The Binge. The Comedian story is very long, but in a nutshell, I was at The Comedy Cellar in New York one night and DeNiro was in the audience with a director named Taylor Hackford. DeNiro saw me and loved my act. He called me in to meet with him. I sat with him for hours and we connected. He wanted me to be in the movie, but from our discussion and being together he decided he wanted me to teach him how to do stand-up. I met with him every day for months and I became his “comedy whisperer.” He wore an earpiece and I spoke to him on a microphone through the filming of the movie. I got a producer credit on the movie. It was unbelievable. That was an incredible experience because I got to learn how to work on a movie. That was all from him seeing me do stand-up.

GS: Do you think we might someday see you co-starring in a movie with your step-brother Zach (Braff)?

JK: Possibly! We’re both always working on our own things. He directs a lot of sitcoms, commercials, and movies. He just got a movie role; a remake of a movie (Cheaper By the Dozen). Years ago, he, I, and my other step-brother, Adam, had a sitcom deal about our parents and growing up in the house with my mom being a therapist. It was hysterical, but it didn’t get picked up and he went back on Scrubs. I know that we will definitely do projects together in the future for sure.