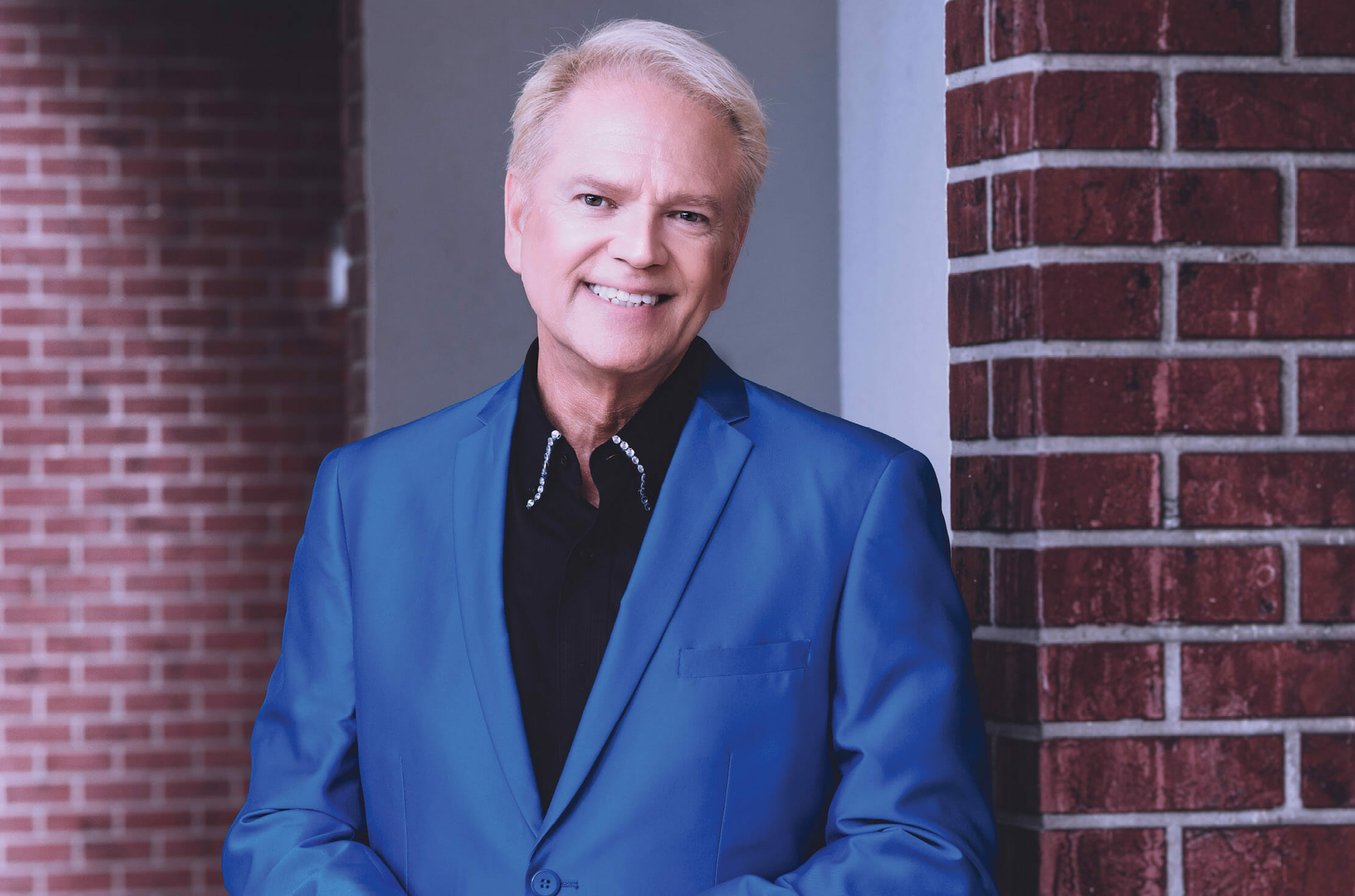 He’s a piano virtuoso, a master storyteller and in his 18th century men’s dressing gown, a fashion icon. Pennington is an entertainer with a long-standing love affair with his fans. His open style of entertaining started early. Pennington made his public music debut at the age of eight and was soon heard playing Brahms by concert pianist Leonidas Lipovetsky. Several days later he was invited to study with the world-renowned artist.

Now he’s telling OutClique about his latest and creatively titled production: The Pennington Show (Bedtime Stories From The Piano) – Truly Ticklish Tales of Mysteries, Miracles and Mayhem! “A very long title, I know. I got the idea when I began to reminisce on unusual, strange and unexplained happenings in my life and in the lives of family and friends. I have always been very interested in the mysterious, the miraculous, the mystical. Remembering these true stories of things that weren’t supposed to happen but did, I formed an idea for a show.”

While Pennington is an amazing piano man, he also steps away from the keys to tell stories and make a connection with the audience. “I wanted to magically weave a tapestry of true-to-life unforgettable tales, songs and mysteries, while mixing in a few jokes and common experiences. When I did that, I discovered people would laugh, cry, sing along with me or sit in absolute wonder and sometimes get goosebumps! It’s magical.”

Mysteries and mysticism are broad terms, so Pennington explained what they mean to him and how they affect his performances. “My close friends will tell you that I can go on for hours about this subject, but I will contain myself for now. Simply stated, the definition of mysticism is: a doctrine of an immediate spiritual intuition of truths believed to transcend ordinary understanding. A belief in the intimate union of the soul with that which is Absolute Love. One is often initiated into a mystic understanding through some extraordinary spiritual experience.” Pennington gets very personal about when the connection revealed itself to him. “In my case, it was a powerful mystical revelation which occurred while I was on a secluded beach in Maui.  It became the catalyst of a profound change in my way of Being.  It affected everything from the simple aspects of my daily life like my attitudes towards traffic, chores and people to my understanding of Reality vs. the self-concept of reality. Naturally, the show touches on some of that. I couldn’t talk about mysteries, miracles and mayhem without it. Don’t freak out, there’s lots of laughter and fun in the show! Joy is a by-product of being a Mystic!”

Pennington’s aura and attitude are informed by what he describes as multiple encounters with angels. “I have personally had two encounters with angels. They didn’t look like angels with big fluffy wings and flowing robes, but as the experience unfolded before me, they didn’t fit into the norms of the way things happen. For instance, appearing seemingly out of nowhere at the exact moment that I needed something. They looked pretty normal, but something was just a little ‘off.’” These moments were impactful. “One of them was standing there one moment and gone the next. There was absolutely no possible explanation of how he managed to just walk away. We were standing in a large parking lot with no cars, no buildings close enough for him to get to within 4 seconds, no trees, no bushes to hide behind. Simply standing there one minute and gone the next.” Pennington says he’s had a lot of these types of mystical encounters, but teases he saves the best ones for the show. Born into a family with a long history of faith and spirituality, he faced discouragement when he and his partner became the center of a church’s infighting simply for being gay.  He used that disappointment to seek inside himself and discover the joy of real spirituality, while releasing dogma and doctrine in favor of the magnificent and natural connection to true Source.

Mayhem is an accurate part of the title and appropriate name for the show, as the COVID pandemic created mayhem for the production. Pennington had this show ready to perform and even had friends ready to watch as a ‘test audience’ and give feedback. Then came the lockdown. He’s been rehearsing the show in his home several times a week, adding a song here, dropping a story there. He says the extra time has let him perfect the show.

Another part of the show’s title, (Bedtime Stories From The Piano), refers to his on-stage wardrobe which is old school casual. “I wear my pajamas and an 18th century men’s dressing gown on stage.” He looks fabulous in his outfit, and wants his fans to experience that freedom. “I encourage the audience to wear their pajamas too! It feels a little sexy, maybe naughty to wear your pajamas in public, but in my case, with an 18th century dressing gown, it just feels overdressed!”

Tailored and colorful 18th century men’s dressing gowns aren’t easily tracked down at most stores. Luckily Pennington has a very talented friend. “The dressing gown was designed for me by a friend, Barney Fitzgerald, who is a professional costume designer.   Barney designs costumes for opera companies in New York and Sarasota. We have known each other for years. I have always enjoyed trying on costumes. I used to hang out in Barney’s costume shop and go through the racks of clothes and try on everything that struck my fancy. He was nice enough to humor me and we shared lots of laughs! I do tend to hang on to costumes from previous shows I’ve done, so I guess my wardrobe is pretty deep.”

While Pennington is the star of the show, he says the audience is his inspiration. “I love audiences and always have! Most of my performances are usually in larger theatres.  The audience is sitting in the dark and I’m standing in a big pool of light. It is often hard to see them, but I can hear their vocal reactions and feel their emotions. When everything is working right, I send out a ball of energy to them and they send it back to me and it just continues to grow. Ahh, the magic of theatre!”

His act would be right at home in a Vegas showroom, but he’s getting ready to sing for South Florida. Through a co-sponsorship with Epiphany Theatre and OutClique, he’s bringing The Pennington Show  (Bedtime Stories From The Piano) – Truly Ticklish Tales of Mysteries, Miracles and Mayhem!  to The United Church Of Christ in Fort Lauderdale September 24-25 and October 1-2, 2021. “What is so terrific about the space at The United Church Of Christ in Fort Lauderdale is that it is an intimate space. It seats about 300 people but due to COVID restrictions I believe they are limiting the seating to about 150. That will make for a wonderful intimate experience. I’ll be able to actually see the audience!” Opening night and closing night  will have exclusive VIP Champagne Dress Circle seating making the night even more special.

Pennington also sees the audience after the show where he makes a personal connection that sometimes even he can’t believe. “After a show I have stood for hours shaking hands, signing autographs, posing with fans for selfies, listening to their stories, having my hands caressed. Seriously, it has happened so often that a fan will hold my hands and just stare at them and caress them and say how nice my hands are. I don’t get it, but it happens. Sometimes they write notes, send emails, and bring gifts. Fans are the reason I have been able to perform and do this thing I love, so I love love love them!” That interaction begs the question: Does he use a special lotion to keep his hands soft and moisturized? “No, not really.  I think people just admire talent and those they perceive as “gifted.”  We are all gifted in different ways.  I have been lucky  to have had some musical ability and have put in many, many long hours of practice to achieve a level of mastery at the piano.  I was fortunate to have studied with some fine teachers and it doesn’t hurt that my student lineage goes back a mere six steps to Beethoven! ”

The show will seem like a series of individual songs and stories, but Pennington says at the end, the audience will see a bigger, fulfilling picture. “I connect stories and songs which, perhaps, on the surface seem to be unrelated until you suddenly realize they are all related and there is a point to it all, a great overarching narrative. Whether we are laughing together or I’m in the middle of some eerie tale and goosebumps are creeping up your spine, or we are sharing a poignant moment that brings a tear, it all relates back to the same perspective.”

For tickets: https://penningtonshow.eventbrite.com  To get a glimpse of his performances and learn more about the artist, go to PenningtonShow.com.