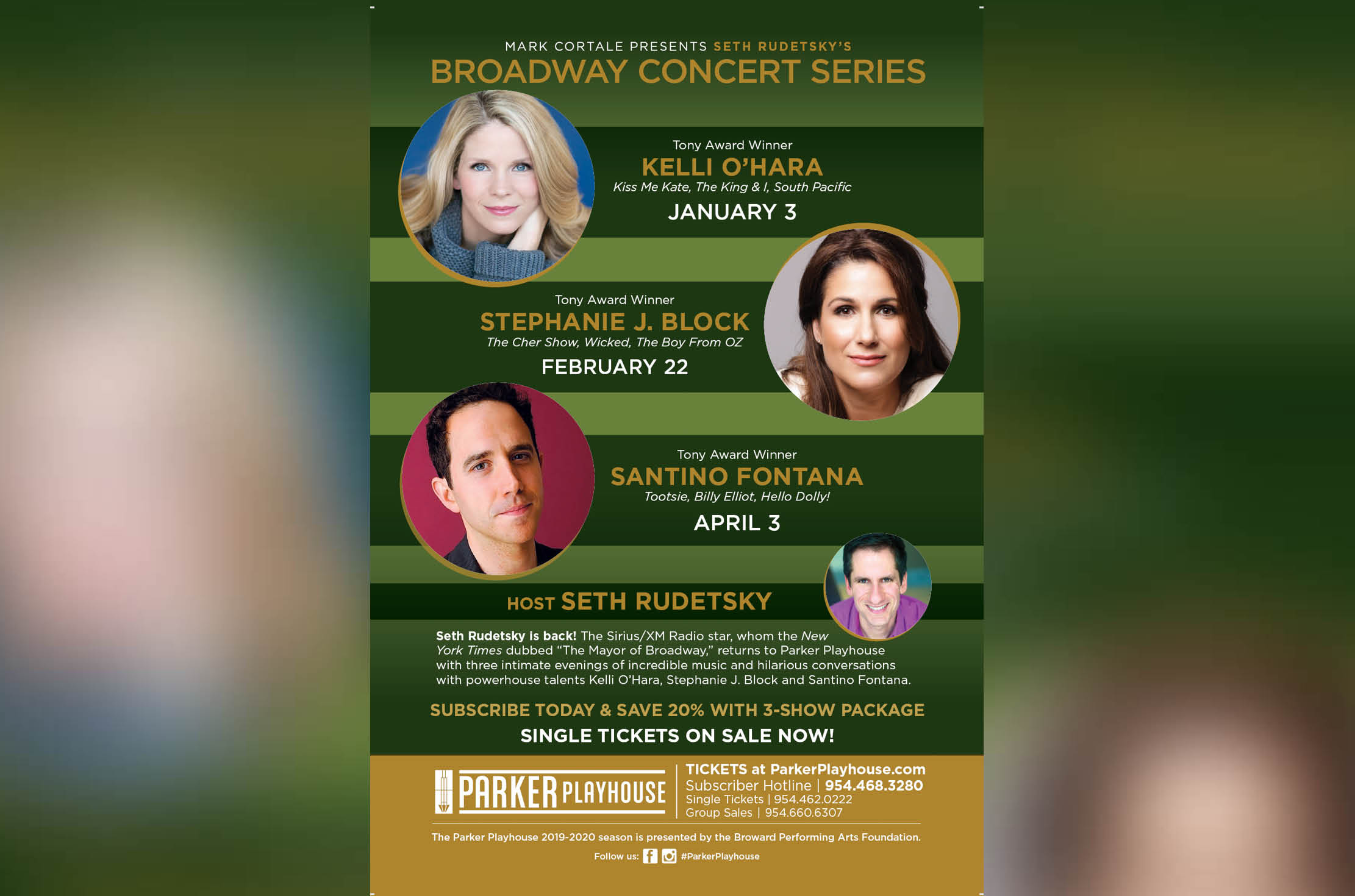 The Seth Rudetsky Broadway Concert Series presented by Mark Cortale returns to Parker Playhouse in 2020. The series, co-presented by the Broward Center for the Performing Arts, delivers three intimate evenings of incredible music and hilarious conversations hosted and music directed by the SiriusXM Radio star, whom the New York Times dubbed “The Mayor of Broadway.” The series features three Tony Award® winners and critically-acclaimed powerhouse talents: Kelli O’Hara (The King & I) on January 3, 2020 Stephanie J. Block (The Cher Show) February 22, 2020 and Santino Fontana (Tootsie) on April 3, 2020.

Rudetsky is the host on Sirius/XM Satellite Radio’s “On Broadway” and “Seth Speaks” on Sirius/XM Stars. He penned My Awesome/Awful Popularity Plan and The Rise And Fall Of A Theater Geek and three volumes of Seth’s Broadway Diary featuring inside scoop and hilarious stories from Broadway. He co-wrote and co-starred in Disaster! – The Musical. In June 2016, he and his husband, James Wesley, co-produced “What The World Needs Now” which hit #1 on iTunes raising over $100K for the Orlando shooting victims. More information is available at www.sethrudetsky.com.

O’Hara, who most recently earned a Tony Award nomination this season in the Broadway revival of Kiss Me Kate, launches the series on Friday, January 3 at 8 p.m. On Broadway, her portrayal of Anna Leonowens in the critically acclaimed revival of The King and I garnered her the 2015 Tony Award for Best Leading Actress in a Musical, along with Grammy®, Drama League and Outer Critics nominations. She then reprised her Tony-winning role while making her West End debut for which The Times hailed her as “Broadway musical’s undisputed queen” adding “Kelli O’Hara does not just play Anna, she owns the part.” Other Broadway credits include: The Bridges of Madison County (Tony, Drama Desk, Drama League, Outer Critics Circle nominations), Nice Work If You Can Get It (Tony, Drama Desk, Drama League, Outer Critics Circle nominations), South Pacific (Tony, Drama Desk, Outer Critics Circle nominations), The Pajama Game (Tony, Drama Desk, Outer Critics Circle nominations), The Light in the Piazza (Tony & Drama Desk nominations), Sweet Smell of Success, Follies, Dracula and Jekyll & Hyde. Regional/Off-Broadway credits include: Far From Heaven (Playwrights Horizons and WTF), King Lear (Public Theater), Bells Are Ringing (City Center Encores), Sunday in the Park with George (Reprise) and My Life With Albertine (Playwright’s Horizons). O’Hara received a 2018 Webby nomination for her role in the hit web-series thriller The Accidental Wolf and appears in the second season of Netflix’s series 13 Reasons Why. Other film and television credits include: Sex & The City 2, Martin Scorsese’s The Key to Reserva, Showtime’s Master of Sex, CBS All Access’s The Good Fight, Blue Bloods, Alexander Hamilton, N3mbers and the animated series Car Talk. In 2015, she made her Metropolitan Opera debut in The Merry Widow.  She returned to the opera this past spring as Despina in Così fan tutte. Her concerts have gained international acclaim, spanning from New York’s Carnegie Hall all the way to Tokyo. She is a frequent performer on PBS’s live telecasts and the Kennedy Center Honors. Along with two Grammy Award nominations, her solo albums, Always and Wonder in the World are available on Ghostlight Records. O’Hara recently received her first Emmy® Award nomination for Outstanding Actress In A Short Form Comedy of Drama Series for her portrayal of Katie Bonner in the hit web series The Accidental Wolf.

The series culminates on Friday, April 3, 2020 at 8:00PM. with Fontana who currently stars on Broadway as Michael Dorsey in the stage musical adaptation of the film Tootsie, for which he was awarded this year’s Tony Award for Best Actor in a Musical. He was previously nominated for a Tony Award for his starring role as Prince Topher in Rodgers & Hammerstein’s Cinderella on Broadway. Fontana originated the role of Tony in the Broadway production of Billy Elliot and was awarded the 2010 Drama Desk Award for Best Featured Actor in a Play for his work in the revival of Brighton Beach Memoirs. He has also appeared on Broadway in the revivals of Sunday in the Park with George, The Importance of Being Earnest, Hello, Dolly!, Moss Hart’s Act One and in the Encores series productions of 1776 and Kurt Vonnegut’s God Bless You Mr. Rosewater. He provided the voice of Prince Hans in the Walt Disney Animation Studios film Frozen which he will reprise in the upcoming Frozen 2, and starred on television in the CW romantic musical comedy-drama Crazy Ex-Girlfriend as well as appearances in Fosse/Verdon, Mozart in the Jungle, Shades of Blue and Submissions Only among other television and film appearances. In 2005, as a member of the Essentials, Fontana co-wrote the musical comedy Perfect Harmony and originated the role of Philip Fellowes V. In 2006, he starred as Hamlet in The Guthrie Theatre’s performance of the Shakespearean classic, before moving to New York City to star as Matt in the Off-Broadway revival of The Fantasticks. He is married to actress Jessica Hershberg.

Tickets to each concert are $37.00-$67.00 with $123.00 VIP tickets offering a meet and greet with the artists. A three-show subscription is available and offers a 20% savings and the same seating for each event. Subscription renewals begin Tuesday, September 3, 2020 with new

Ticketmaster is the only official ticketing service of Parker Playhouse. Buy tickets online at ParkerPlayhouse.com and Ticketmaster.com; by phone at 954.462.0222; in person at the Parker Playhouse box office Tuesday through Saturday from 12:00PM. to 5:00PM and at the Broward Center’s AutoNation Box Office.

The neo-classical Parker Playhouse is a Fort Lauderdale landmark. One of the city’s first entertainment venues, it was built by Dr. Louis Parker and opened its doors on February 6, 1967. During its early years, the playhouse earned its reputation presenting theatrical seasons featuring legendary Broadway stars. In 2005, the Broward Center for the Performing Arts assumed management of the 1,168-seat, fully-equipped theater and, over the years, it became a venue of note for every kind of artistic activity – theater and Broadway, music, concerts, dance of all genres, comedy, conversations, celebrations and educational programming that is curriculum-driven and aligned with Florida state standards. Parker Playhouse is undergoing a $30 million transformation to take the iconic venue into the 21st century. For more information on the Parker campaign, visit ParkerPlayhouse.com/Support.