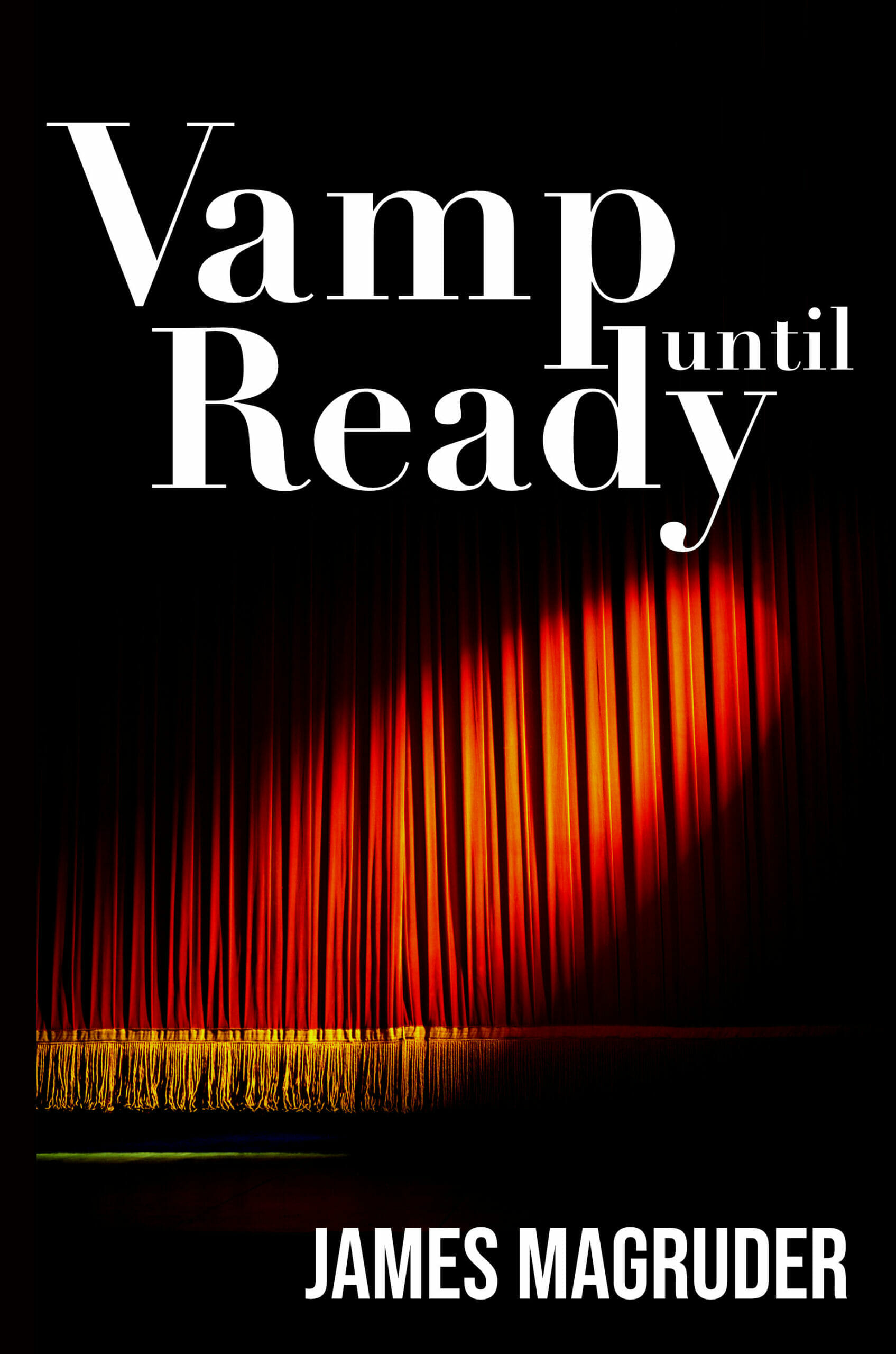 James Magruder is a funny guy. His wonderfully wicked sense of humor comes through in his plays, most recently the 2018 Broadway musical Head Over Heels, as well as his fiction, including his 2009 Lambda Literary Award finalist debut novel Sugarless, and now in his new novel Vamp Until Ready. However, Vamp Until Ready, which spans 1980-1992, isn’t all fun and games. In fact, it has its share of heartache and heartbreak. It also contains some incredible literary sexual tension (Cary and Jon’s budding romance), and a marvelous tribute to none other than Shirley Booth. James, who also teaches at Swarthmore College, was kind enough to make time for an interview with OutClique.

Gregg Shapiro: James, early in your new novel Vamp Until Ready, there is a reference to a Lily Tomlin routine involving her characters Lud and Marie, and she is referred to again near the conclusion of the novel. What can you tell the readers about Lily Tomlin and her influence on you?

James Magruder: Somehow, I got a hold of Lily’s On Stage album when I was a junior in high school. Like many other gay boys, I wore it out until I had memorized it. “PLEASE STOP TALKING ABOUT THAT CAKE!!!!!”, from the “Lud & Marie Meet Dracula’s Daughter” routine is as much a 70s comedy flashpoint as “Sister Mary Elephant” (Cheech & Chong’s) or “We come from Remulak, a small town in France” (The Coneheads). Tomlin’s earlier album, Modern Scream, was equally formative/corrupting. My husband and I saw her once in a taqueria in Austin. She moved past our table, knew we had recognized her, and blew Steve a kiss.

GS: For the most part, Vamp Until Ready is set in Ithaca, New York. Why did you choose this setting?

JM: I went to college at Cornell and spent three summers doing stock at the Hangar Theatre. It’s a town I’ve loved for 40 years.

GS: The way you write about it, Ithaca is a character unto itself. Was it your intention to make the city as much a character as the others that populate the novel?

JM: Absolutely. Tompkins County is the blue island in all-red upstate New York, like Austin is for Texas. It’s one of the great college towns, a very special place for those who know it.

GS: The other significant geographical location in the book is Africa. As someone who has traveled there, was this an opportunity to share your knowledge and experience?

JM: More autobiography, I’m afraid. My husband, who was monitoring HIV research studies for Johns Hopkins, and I lived in Kampala, Uganda for ten months in 2013-2014 before Dictator/President Museveni passed a “kill the gays” bill. We were airlifted out with our cats by Johns Hopkins. Judy Gabelson’s experience in Part Three of Vamp was a way for me to capture the things I liked about Uganda and Ugandans before things went downhill.

GS: There’s a line near the end of the book describing the life of Cary Dunkler – one of the main characters, prior to an important turning point as “vamping until ready,” the phrase from which the book gets its title.

JM: The book needed a theater term for a title. For the longest time, it was called Save Yourself, which is what you do onstage if everything is screwing up. Lesbian comedian Cameron Esposito brought out a memoir with that title only last year, and that felt too close in time. “Vamping until ready” is what the orchestra does until the singer is ready to begin the song. What the major characters experience in the novel by making theater prepares them to begin life – or begin again. They’ve been vamping, but now they’re ready.

GS: The Cary Dunkler parts that bracket the novel are written in first person, while the other three parts – Kristy Schroyer & Isa Vass, Judy Gabelson, and Mark Shinner – are in third person. What was involved in the decision to utilize these devices?

JM: A gay, first-person male narrator is my sweet spot, so Cary was easy to write. Kristy, Isa, and Judy were and are a departure for me. They are functioning heterosexual women, and I didn’t feel it would be honest for me, at least not yet, to write them in the first person. Ditto Mark Shinner, the first straight man with whom I spend meaningful time in my fiction.

JM: I’ve written so much about AIDS, and my own positive status, in Let Me See It and Love Slaves of Helen Hadley Hall, that I backed away from it in Vamp. But it cannot, and should not, go missing in a novel about theater people in the 1980s.

GS: At a time when the future of Roe v. Wade is increasingly uncertain, Vamp Until Ready shines a light on adoption, with the characters Cary and David having been adopted by the same family in what is referred to as “two for one orphan deal.” Can you please tell the readers something about the adoption theme at the heart of the book?

JM: Theater is a place where you form successive families that last as long as the show does. Sometimes you can make friends for life from members of a theater family. I worked at a big regional theater for 15 years and always thought of it as an orphanage, peopled by birth family casualties who are looking for adoptive parents and siblings for a safe amount of time.

GS: Theater plays a large role, pardon the pun, in the novel. There’s a wonderful description of the emotions stirred up during the closing night of a show. As a playwright and someone who knows how a closing night feels, was it easy or difficult to put this experience into words?

JM: Closing night for a playwright is very different from closing night for a chorus boy. I’ve been both. Rather than go on at length about how bizarre the experience is, it was easier for me to have Cary directly address the reader by saying, “I figure some of you have been in plays, and so know how a closing night feels.” Their common knowledge keeps Cary from examining his own sad feelings about it. He transfers them to mention that the Damn Yankees diva, Suzy Skurnik, was as red and leaky as a fire hydrant at the curtain call.

GS: The musical Head Over Heels, for which you adapted the book, features the music of the Go-Go’s who was inducted into the Rock and Roll Hall of Fame in October 2021. What do you think about the band finally receiving such an honor?

JM: Way, way overdue for the first successful all-female rock band that wrote and performed all of its own music.

GS: Regional productions of Head Over Heels are being mounted in a variety of cities, including one by Slow Burn Theatre Company in South Florida. What does it mean to you to see the show being revived in post-Broadway runs?

JM: Since the show closed in January 2019, I have seen productions in Atlanta, Chicago, and Sarasota. I love that our big-hearted musical for mean times has proven so popular.

For more information about Slow Burn Theatre, please call (954) 323-7884 or visit them online at https://www.slowburntheatre.org.