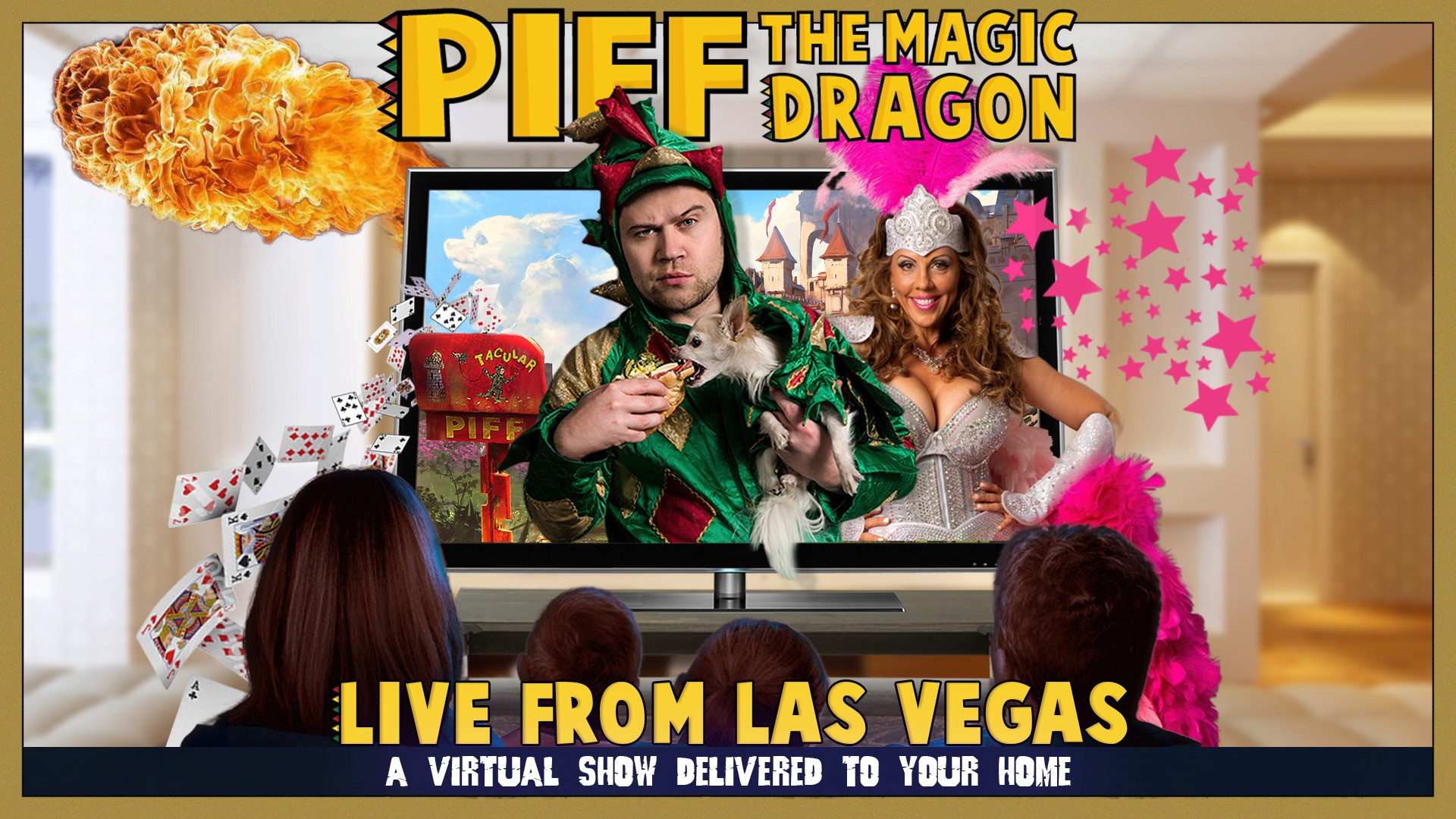 To stay up to date with Piff the Magic Dragon, follow him on social media. Passes to access the livestream event are $35.75, and capacity is limited with each ticket allowing viewing on one device. Tickets can be purchased at www.BrowardCenter.org.

With theatres currently closed thanks to the COVID-19 pandemic, many entertainment seekers have been left with a void. In an innovative move, the Broward Center for the Performing Arts will virtually reopen their doors with Piff the Magic Dragon: Live from Las Vegas, an all-new hilarious and interactive magic experience that will bring Vegas-showmanship and excitement straight to your living room. The live virtual shows are August 7 & 14, 2020, at 7:00PM.

Piff the Magic Dragon: Live from Las Vegas brings the signature wit and wizardry of the standout star of NBC’s America’s Got Talent and Penn & Teller: Fool Us. Hot off his record-breaking Vegas residency and assisted by his trusty sidekick, Mr. Piffles – The World’s Only Magic Performing Chihuahua, audiences are guaranteed to enjoy this funny, family-friendly show.

OutClique had the opportunity to chat more with this sought-after entertainer.

Denny Patterson: Hi, Piff! Thank you for taking some time to chat with me. Can you begin by telling us more about how Piff the Magic Dragon came to be?

Piff: I was a regular magician for 10 years, and I was getting fired everywhere because I was too grumpy. So, my friend said they were having a costume party, and I agreed to go, but I didn’t have anything to wear. My sister said she had a dragon outfit under her bed. I didn’t ask any more questions because it was my sister, and I went to the party in a dragon outfit. Nobody else at the party was wearing costumes, it was just me. Like, you kidding me? My friend came up to me and said, “You could be Puff the Magic Dragon.” I said, “Wait, I can be Piff the Magic Dragon.” You might have heard of my older brother Steve. Like, oh man, that is funny. Then six months later, I gave it a go, and it worked. It was like an instant success, which was great because I was getting fired everywhere. Everyone who fired me, they rehired me because apparently a grumpy dragon is hilarious. It worked out very well.

DP: What can audiences expect from your interactive livestream tour, Piff the Magic Dragon: Live from Las Vegas?

P: It’s crazy because, obviously, Vegas is shut down in terms of shows, and our tour is shut down. We did 400 shows a year, so it’s crazy to go from 400 to zero. So, we got together to see what we can do, and we basically spent four months working on building a TV studio and working on a new kind of show. We have filmed like three weeks of it now, and it’s its own thing. It’s not the same as coming to see us in Vegas or on the road. We made a specific show just for this. The idea is to watch it at home, preferably on your TV, but we have had people watch the show in hot tubs, on their way to soccer practice, [and] while making dinner. We found a way to bring people watching the show at home into our Vegas studio. We have this whole setup where our audience volunteers appear in the studio just like if I would have brought somebody up on stage. We spent a long time trying to recreate the same thing that you would experience if you were seeing the show live.

DP: What are you looking forward to the most about this livestream tour?

P: I love doing shows again. Honestly, we have really missed doing shows. My show has so much audience interaction, and that was the one thing we wanted to recreate. We didn’t want to do a show where it was just me shouting at a camera in silence. Like Alex Jones from InfoWars. Oh my God, that would be terrible. We worked really hard on this and we have a way to bring people into the studio to interact with them, do jokes; all that fun stuff. And we do it market-by-market. We have played at Broward [Center] and Off the Hook Comedy Club before, so we have an audience in Fort Lauderdale. By doing it venue by venue, we can like do a show specifically for our Fort Lauderdale audience. Same for wherever we get to. It’s a way to localize it, and since the Broward Center can’t open their doors at the moment, this is a way for both of us to support each other. This is definitely a time to come together.

DP: What is the number one reason why one should see a Piff the Magic Dragon performance?

P: I mean, what else are they going to do right now? There shouldn’t be a number one reason, there should be a number 17 reason. They’re at home, and this is sort of like Netflix. When people came out to our show, they would have to buy 4-5 tickets to take their family. Even if you go as a couple, it’s two tickets, then you have to worry about parking and you probably went to dinner beforehand, blah, blah. This is literally one ticket for the entire family. You can supply your own drinks and don’t have to leave your house. It is a lot more convenient for everyone.

DP: Have you always had a passion for comedy and magic?

P: Yes, I have. I don’t know why, but it was the thing that I loved when I was a kid. I loved doing tricks, and I was always constantly sarcastic to everyone. It would have been much easier for me if I would have just done the magic on its own because people get pretty upset with you when you’re booked to do their wedding and you start making fun of everyone [laughs]. It worked out in the end, just took a long time.

DP: What is your favorite part about performing?

P: For me, it’s the fact that the show is different every night. There’s like a five minute section in the middle where I do a bit of stand up and talk about some stuff that’s happened to us, and that’s the same every night because it’s like saying the same lines, and I actually have to be careful not to sort of drift off to that point because I have done it a hundred times, but the rest of the show changes every night. There’s no other point in the show where I have to worry about anything. I’m always super present in the show.

DP: You have appeared on several reality competition shows like America’s Got Talent, Penn & Teller: Fool Us, and TBS’ Tournament of Laughs. What have those experiences been like?

P: America’s Got Talent is the new Tonight Show. Like back in the day, you used to go on to the Tonight Show and 20 million people would see you and your career would be set for the next couple of years. These days, America’s Got Talent has thankfully filled that void because we’ve got to find a way to work. So, there’s a lot of pressure and it’s tricky. Then we just did this Tournament of Laughs show which was just comedians. America’s Got Talent, you’re performing against eight-year-old singers and you have to crush their dreams, which is always a little brutal. Whereas with Tournament of Laughs, you’re just crushing the dreams of other comedians. I’m fine with that.

DP: And you were named the winner of Tournament of Laughs. Congratulations!

P: Yes! It was unbelievable! Like, I’ve made a whole career from losing, and we accidentally won the whole thing.

DP: What more would you like to accomplish with your platform and career?

P: I just want to be able to keep doing shows every night, honestly. That’s the main thing that we try and do. Find a way to keep it going.

DP: What’s next? Any other upcoming projects we should be on the lookout for?

P: Yes, we are just finishing off a special that we shot last year and we are about to release it in the next few months. It’s me, my pit crew, and Penn Jillette is in it as well.

To stay up to date with Piff the Magic Dragon, follow him on social media. Passes to access the livestream event are $35.75, and capacity is limited with each ticket allowing viewing on one device. Tickets can be purchased at www.BrowardCenter.org.

The Kiss I Didn’t Get Last Night

There’s Nothing Off-Putting about On Mekahel