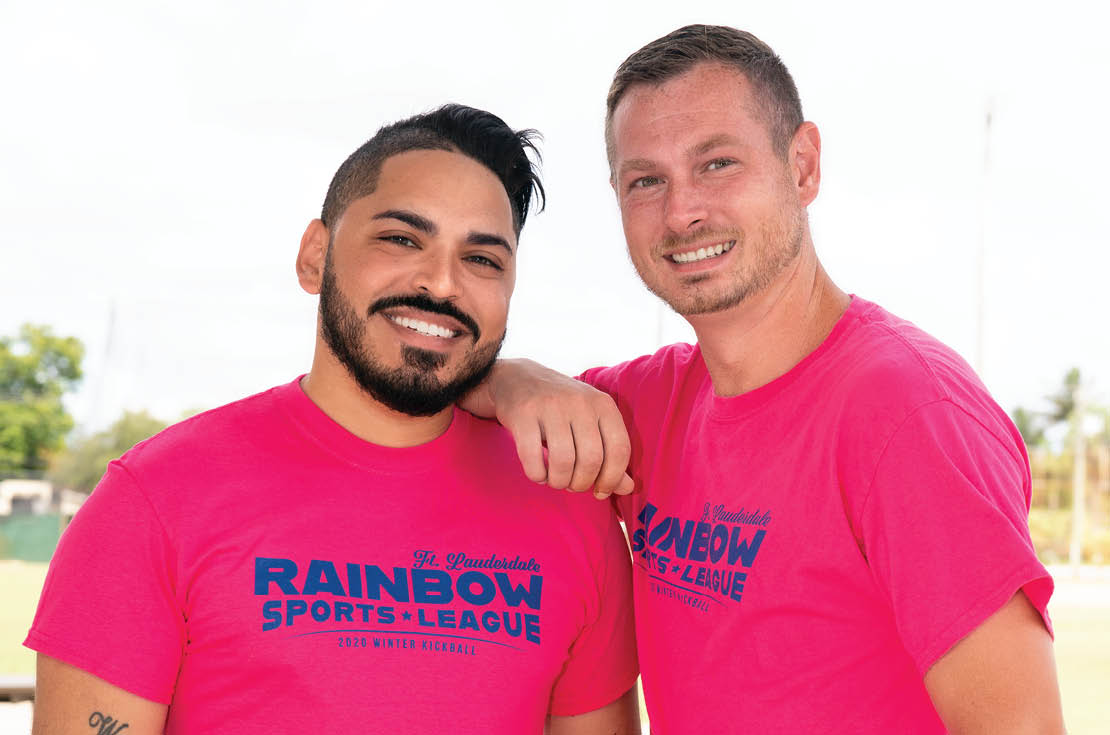 Jason Shervinski has been involved in gay sport leagues for over a decade, first in Washington D.C., then here in Fort Lauderdale. He recently launched his own league called The Rainbow Sports League. In 2019, Kenneth Guerrero took responsibility for running the dodgeball and kickball teams in Fort Lauderdale with Jason focusing on growing the league. Currently in Fort Lauderdale, the league has over 160 kickball participants, and 60 dodgeball players. In Tampa, there are 120 kickball participants. Kickball has three seasons per year, running in the fall through spring, and dodgeball has four seasons.

Gay sports plays an important part in key aspects of the players’ lives. It provides a fun way to socialize, as an alternative to nightlife. It provides recreation and comradery. The league provides a community of support and friendships, and Rainbow Sports League itself gives back to the community through annual fundraisers. Jason and Kenneth spent an afternoon with me to discuss the important role gay sport leagues play in the community, the broader lessons sports teams provide players, and their plans for league growth.

Andrew Armano: I played kickball and dodgeball for a while and I loved it. It was such a great outlet for socializing and exercise. Tell me a little about what you feel the league’s role is in the community.

Kenneth Guerrero: It’s a place to socialize outside of the bars. For me, sports have always been an outlet to meet new people in different walks of life, to just enjoy yourself. So I want that for others. When you’re on that field, you forget your other troubles and remember that life is bigger than that one issue.

Jason Shervinski: Hopefully, it’s a sense of home. For a lot of us, we’re not originally from South Florida, so we look for that feeling of just the safety net of having a home. I think that we create that very well. Then the other thing, too, is that a lot of people’s families don’t accept them. This is your chosen family.

KG: As a team, as a community, we have rallied around individuals during times of hardship and made sure that they were okay; we were there for them. They had the ability to reach out and knew someone was going to respond in their time of need. To me, the best gift is when you know you’re not alone.

AA: It’s a human need to have a place to belong and to be supported. And, in my experience, it gives my life meaning when I can help someone else, so I understand that completely. I played kickball and dodgeball, and I really cherished the chance to meet so many different types of people; there’s a real mix.

JS: A top priority has always been diversity and respect. We want everyone, straight, ally, gay, transgender, all backgrounds and color, everybody is welcome. That starts with leadership. 60% of Rainbow Sports League’s leadership are people of color. We have players that are in their sixties and players that are as young as 21. We have players from all over the world. Some players don’t even speak English. It’s been an amazing thing to bring everybody together just on the sport, the camaraderie, and the competition.

AA: I can imagine it takes a conscious effort to communicate values.

JS: Yes, we make it a part of our membership, so you can be yellow-carded or red-carded for not complying with the core values of safety, inclusion, and respect.

KG: At the start of every season we speak with the teams as a group explaining these values. We are pretty strict. We don’t allow cursing when children are around, and we had to yellow-card some players from time to time until they remembered. We had one player who substituted “pineapple” for his favorite curse word, and it’s still a running joke with us.

JS: It’s a real brotherhood between Kenneth and I, along with Harley. It’s never work because we really enjoy what we do and we are great friends.

AA: I can only imagine the level of commitment it takes to run the league. You both have full-time jobs in addition to the League. What has been the most challenging aspect of leading the program?

KG: For me, it’s been learning to be patient through all the challenges that naturally come up. I’m very independent and very much a go-getter. So when things don’t happen as quickly as I’d like, I tend to get very hard on myself. I’ve also had to remember not to get so caught up in the logistics that I don’t really take the time to get to know our players as individuals so that we can deliver the type of organization that each person is looking for.

JS: I’ve had to learn to be a good listener. When someone’s coming to you, especially in sports, you hear only one person say it, but they’re actually speaking for many more. So it’s important to listen. They have valuable feedback. For instance, we had a player come to us and was basically talking to us about how the more competitive teams during playoffs were just going crazy and the more recreational teams were just being pushed out. It’s a sport, so it’s competitive, but I learned we had different levels of competition and both were very valid. We actually added an A-division, which is the competitive division, and B-division for those with less experience or who just want to have fun without worrying about who wins. Everyone went crazy for it. It was a great success.

AA: I have asked you about the league’s role in the community, but you haven’t mentioned the fundraising you do. I can’t skip that.

AA: The county hasn’t completely re-opened from the COVID-19 lockdown. Are you guys ready for when that happens?

KG: We know there is pent up demand. Our staff is fully ready for the demand. We already have close relationships with the city in regards to the field space. Now it’s just a matter of once we get the green light to play, it’s just putting the word out and saying, “Hey, we’re back and we’re ready.” The staff has been in communication this whole time. It’s just, like I said, the matter of the city saying, “You guys can play.”

AA: What is in store for the future of the Rainbow Sports League?

JS: I believe that now more than ever, with what’s happening in our country, we need to build community, to come together, and work together. I really see the gay sports league as a way to do that. We want our players to have fun, and, hopefully, we achieve even more as a community. We actually had plans to do a national tournament this October, but, unfortunately with the current pandemic, we had to cancel it and move it to 2021. It’s not just going to be Rainbow players, it’s going to be open to any kickball player anywhere in the U.S.