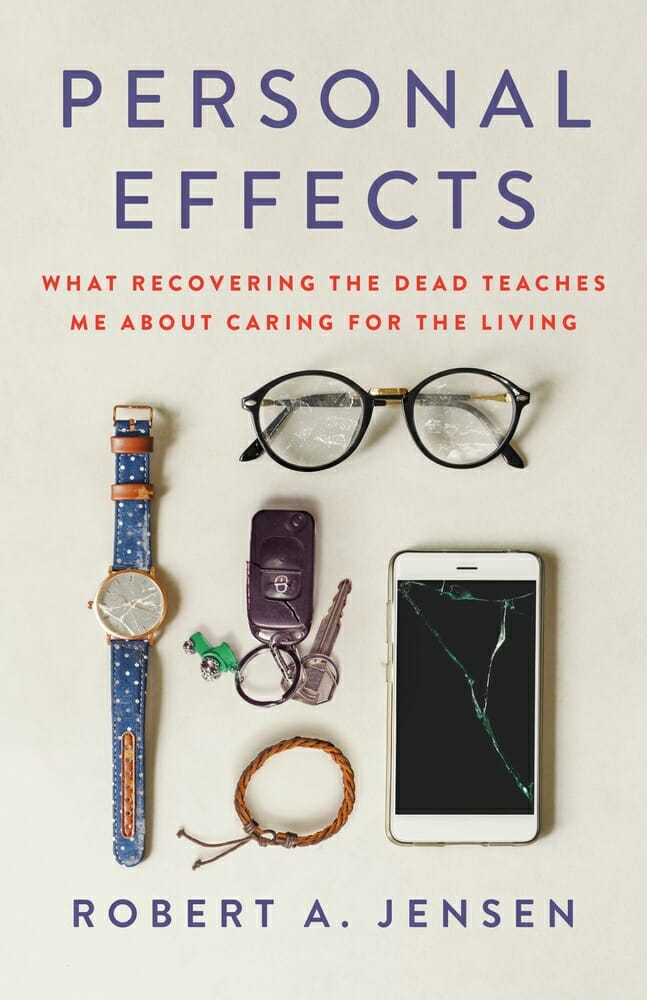 A hurricane can menace us for days before striking, or a building can collapse in the blink of an eye. Other areas are disrupted by a terrorist attack, while a tidal wave can wipe away the lives of many. Once the unthinkable happens, it is important to find calm in the chaos.

That is the job of Robert Jensen, Chairman of Kenyon International Emergency Services, a company that works with families of victims and local responders.

“How do you begin to sort through it,” he said. “How do you take that chaos, that mess and help people transition? It’s about helping people know what’s going to happen and helping the authorities that haven’t been through it.”

After decades of dealing with disasters, Jensen has written a book giving people a look at what goes into dealing with the aftermath. Personal Effects gets very personal, and he shared his experience of diving head first into the eye of a storm with OutClique.

He says people, first of all, find themselves dealing with death from a different perspective.

“If I die at home or in a hospital, there’s a whole system to help loved ones transition. It’s real. They’re going to have to do things right away. They have to plan a funeral and deal with authorities. If I am in a mass fatality scene where I can’t be identified, my body might not be recovered.”

Television and media coverage sanitizes disaster into digestible bites for people who are not affected.

“The news puts it up real quick and it’s the number one story for a couple days. Then it goes away. What people don’t see are the consequences. Their lives are never going to be the same.”

Jensen and his teams are around long after the cameras move on to the next headline-making event.

“I look at responses as a triangle,” he explains. “You have three things you are trying to do. You have the needs of the deceased because human beings have the right to a name and a right to dignity. It’s a fundamental human right to me. When you’re dead, I can’t make your life any better, but I can make sure you have a name and your body is treated with dignity and respect. Then there’s the living. The living might be a community or a family and friends. Lastly, there’s the investigation for prevention and accountability.”

After an event, Jensen says communication is key, and one of his primary goals is to put out a clear message – even if it’s difficult for people to hear.

It’s all part of processing, and he walks them step by step through the process.

“I get asked if they were alive. Were they alive when the plane hit the ground or hit the water? That’s a straightforward question, but let me ask you, what do you mean? Do you mean were they aware? Because you can be alive and unaware. You’re medically alive but you’re unaware.”

“They see CSI on TV and think we can ID a body in an hour. This could be a year or more. Real life disasters aren’t made for TV. We don’t know how many pieces we’re going to recover. I was involved with one person after an incident who was identified 289 times.”

Jensen hopes Personal Effects will help people understand not only the process, but also how to focus after a tragedy. The Boxing Day tsunami of 2004 and the Haitian earthquake of 2010 each claimed hundreds of thousands of lives, and Jensen worked in the aftermath of both.

Those presented cultural differences as well. In Asia, they often quickly cremate bodies, but the families of the western tourists killed in the wave wanted remains preserved and brought home.

“You see governments doing, what I call, trying to manage the bomb that just went off,” Jensen said. “Trying to defuse a bomb that’s already exploded, and the families are dealing with the aftermath of the bomb.”

Jensen wants to end on a message of hope, saying, “Life is great. Life should be fun. There are some really crappy days, but no one ever promised you a rose garden.”

Personal Effects is available now on Amazon and in local bookstores.