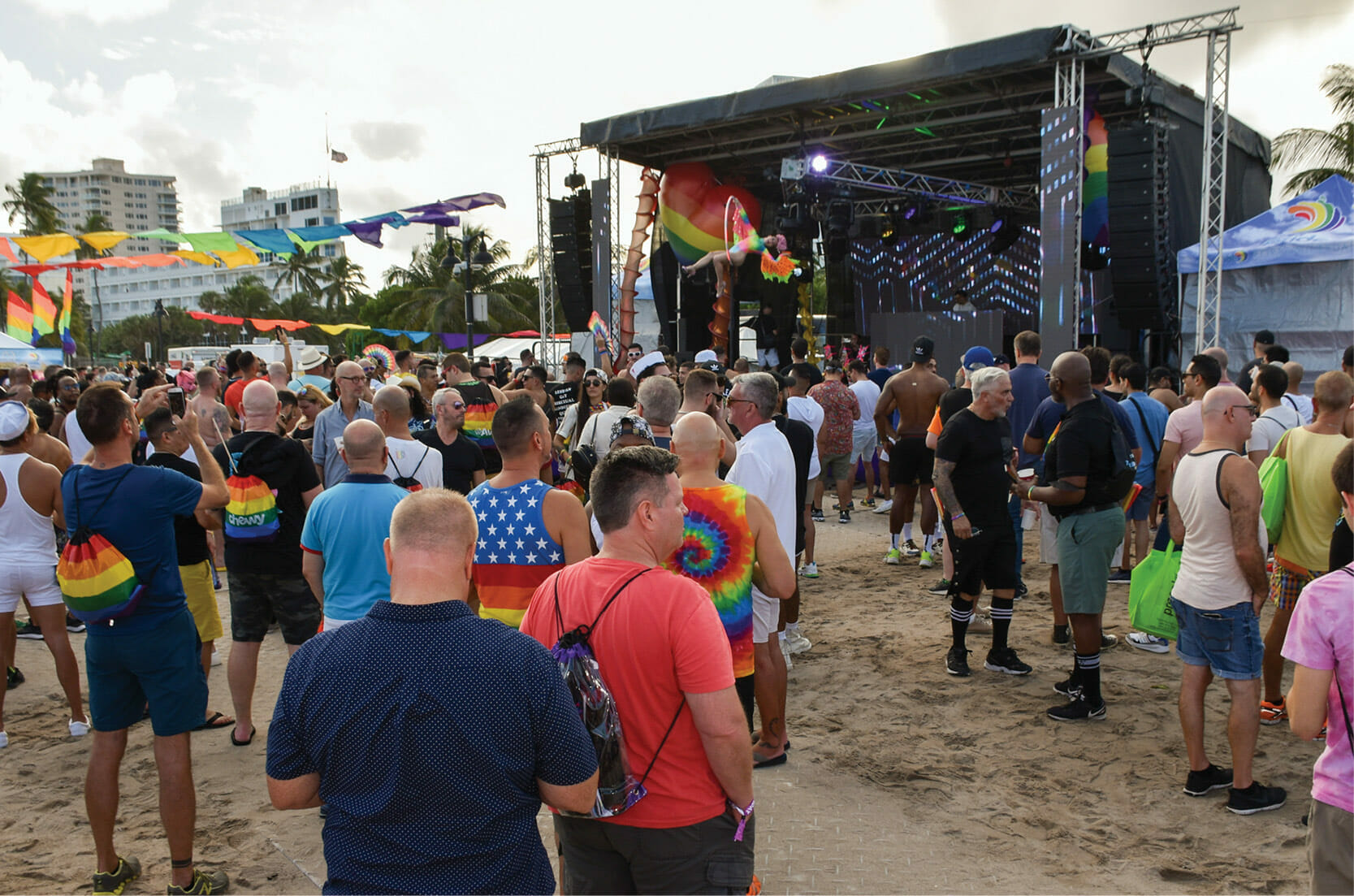 Marching bands and floats with hot guys made their way down A1A (renamed gAy1A for Pride week) for the Pride parade on Saturday, November 20, 2021. The reviewing stand, set up at the intersection of Las Olas, announced each of the 50+ groups that participated in the parade.

Crowd favorites included the limber and athletic cheer squads of Cheer Fort Lauderdale and Cheer Miami. FlockFest showed out, wearing their signature, long pink balloons, as well as the colors of the Pride Flag. Afterwards they pinned their balloons to the fence at the Pride party as a welcome to the thousands that passed by.

The party, at the south end of Fort Lauderdale beach across from the Bahia Mar hotel, was the most inclusive pride event anyone could remember. Pride Fort Lauderdale made it their mission to be inclusive and diverse. For the first time there was a Bear Pride, Afro Pride, Trans Pride, and Lesbian Pride. Donald Gunder of Afro Pride, talked about starting the organization from scratch, plus the help and acceptance shown to them by Pride Fort Lauderdale. “For our first year, it’s a great experience for us. For the Black and brown community, feeling like we are one. We do appreciate Pride Fort Lauderdale bringing us in and working with them. They’ve shown nothing but love to us. Major support.”

In the trans area, pictures of those murdered simply for being trans were displayed. Morgan Mayfaire stressed the importance of remembering those lost. “We don’t think of them as victims, we think of them as fallen angels. This year we’ve counted almost 60.”

Gunder was very happy with Pride’s inclusive vibe. “It’s very interactive. Everybody’s having a good time, walking around, talking, networking and connecting.” Afro Pride’s DJ added to the party atmosphere, where everything from hotdogs to solar panels to THC products were on sale.

On the main stage, big names like Aquaria and Kitty Meow entertained the crowd. Just a few feet away in the Hunters Nightclub VIP tent, people sipped on cocktails and danced along to the music from the main stage.

This year the footprint of the event was bigger than ever, in preparation for next year’s Pride of the Americas, which is scheduled for November, 2022.