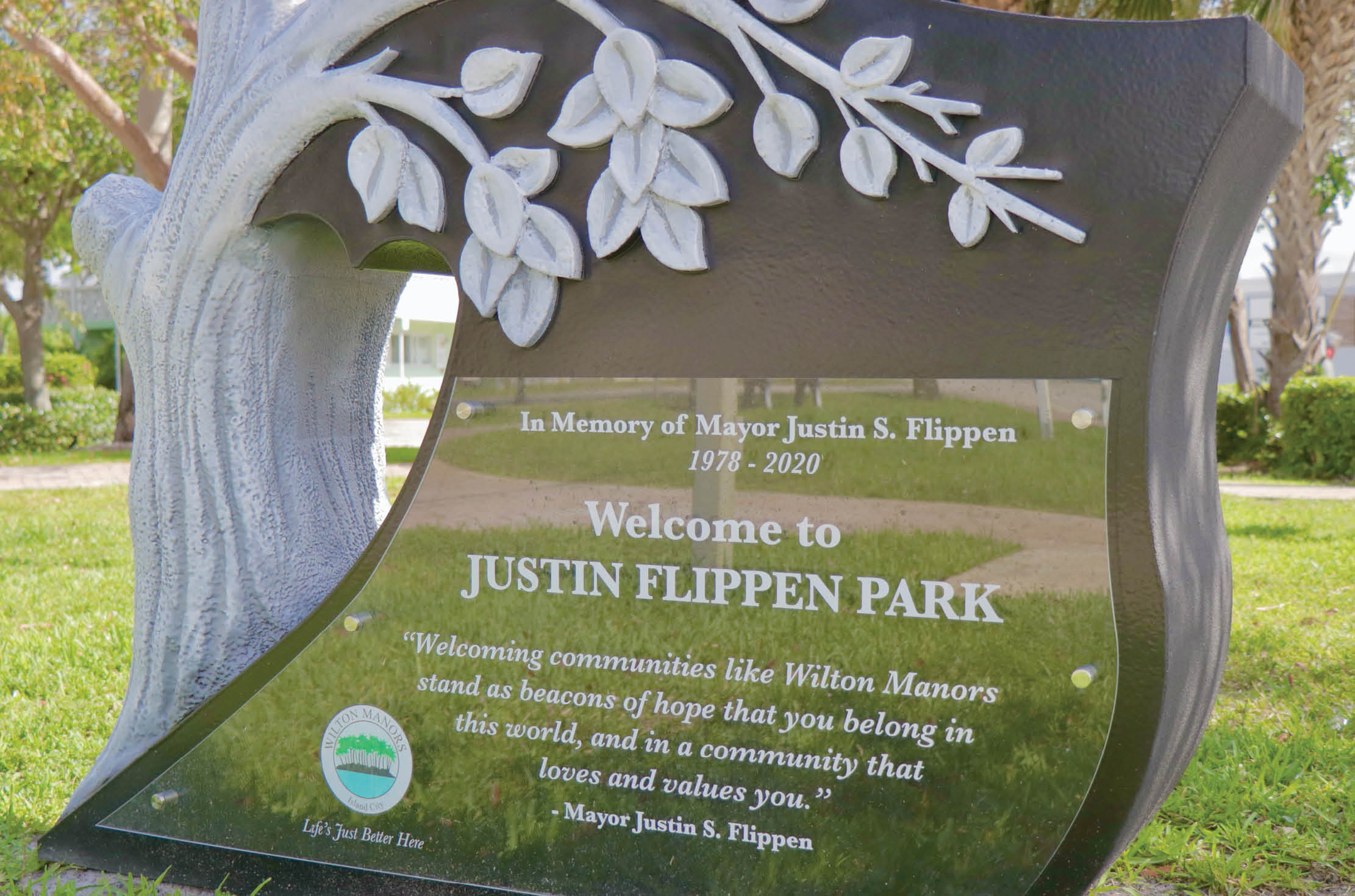 The late Wilton Manors Mayor Justin Flippen loved nature and visiting parks. He would visit national parks and feel just as at home as he would walking down Wilton Drive. Now Wilton Drive is home to a park bearing his name. On April 17, 2021, the park across the street from Wilton Manors City Hall was renamed in his honor.

The park at 2109 Wilton Drive was long known as Jaycee Park because the Jaycees maintained it in the mid-20th century before the city took over. The process to rename the park was already underway when Mayor Flippen died suddenly in February, 2020. His friend and colleague Julie Carson says she dedicated herself to honoring Justin. “When I spoke at Justin’s memorial service, I made a personal commitment to family and friends that I would do my part in ensuring that Justin’s legacy continued through the dedication of Jaycee Park in his name and memory.”

Several proposals were suggested, and a choice that didn’t recognize Mayor Flippen by name was approved by the city’s Parks and Recreation Advisory Board. Board member Carl Shearer had been working closely with Justin and says he worked with the city to keep up the fight. “Acting Mayor Green and the Commissioners did reject the Park and Recreation Board’s naming recommendation. Acting Mayor Green took an emotional decisive recommendation to re-name Jaycee Park to Justin Flippen Park and received full Commissioner support.”

While the effort took more than a year, much of which was because friends wanted to wait until the pandemic subsided enough so that more people could come to the dedication, including Justin’s family who are grateful to everyone for their hard work. For his friends Carl and Julie, it was a labor of love. “I was drawn to Justin,” Julie told OutClique, “as I believe he was me, because of our shared commitment to personal honor, authenticity, love of family, mentorship of children, and assurance of the good value of a life in public service.”

Carl concurs, “Justin was just special, period!  So hard to describe, but he oozed love for his city, kids and the community, and for me, his passing was truly like losing a brother, and only time will ease the healing process. I know I am blessed like so many in the city that he touched.”

Halloween Isn’t Canceled. “It’s Just a Bunch of Hocus Pocus” returns to The Kelsey Theater October 30-31 with a leading cast of south Florida

Cesar A. Becerra to be Featured on the Next History Fort Lauderdale Virtual “Meet the Author” Free Zoom Series on August 12, 2021.