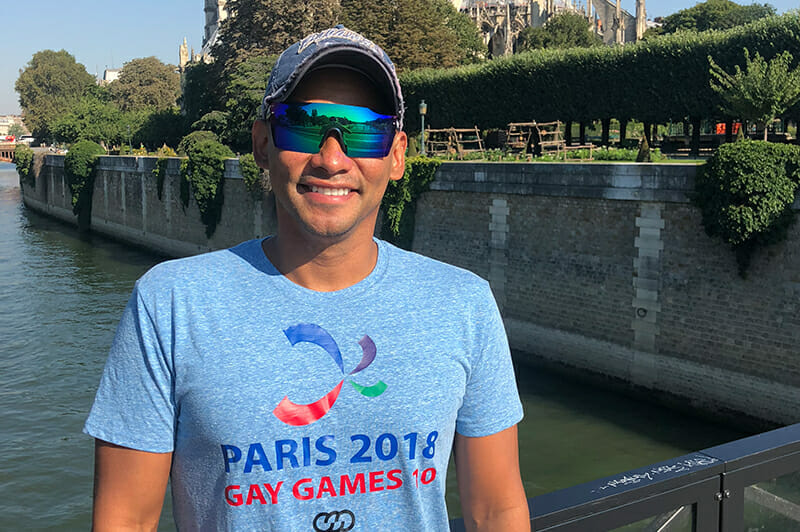 When South Florida resident Alvaro Gutierrez picked up swimming two years ago as a therapeutic way to relax his mind and body, he never thought it would become such an important part of his life. This year, he joined more than 1,000 participants in the swimming program at the 2018 Gay Games in Paris representing the Fort Lauderdale Hammerheads. Last year, Gutierrez competed in the World OutGames. Even though the international event was canceled, swimming was one of the few sports that still took place. I had the pleasure of chatting more with Gutierrez about his passion for swimming and his experience at the 2018 Paris Gay Games. He hopes to participate in the 2022 Hong Kong Gay Games.

Let me start of by asking, what was it like being in Paris for the 2018 Gay Games?

The 2018 Gay Games was an extraordinary experience. The diversity was quite impressive. Different languages, ethnicities, cultures, and social backgrounds, all in one location to celebrate each other regardless of where we are from or live.

What sport did you compete?

Two years ago I probably would not have understood this question. I became an LGBT athlete after divorcing my husband and leaving behind an eight-year relationship. Swimming helped me cope with loss and renew my spirit.

So, the divorce is what initially made you want to start swimming?

Although therapy helped me cope with divorce, I realized I needed something more to help me physically and mentally, so I took on swimming.

What made you want to get involved with the Gay Games?

I knew that the Gay Games would be a key motivator for me to continue practicing. This experience comes every four years and Paris was calling my name.

Were you an active swimmer as a child?

Ha! The only time I was close to a pool was in high school because I had to film the swim team for the morning news.

What do you enjoy the most about swimming?

I love that it clears my mind.  I am very inconsistent when it comes to going to the gym, but with swimming, it’s easier and it’s a lot cheaper than therapy!

And you are a member of the Fort Lauderdale Hammerhead Aquatics Club?

Yes, being part of the team has introduced me to wonderful new friends.

How do you and your teammates bond?

Sometimes on a Saturday or Sunday morning practice, some of us meet up for breakfast.

What do you do to mentally prepare yourself before competing?

I mentally try to relax my body with plenty of sleep. 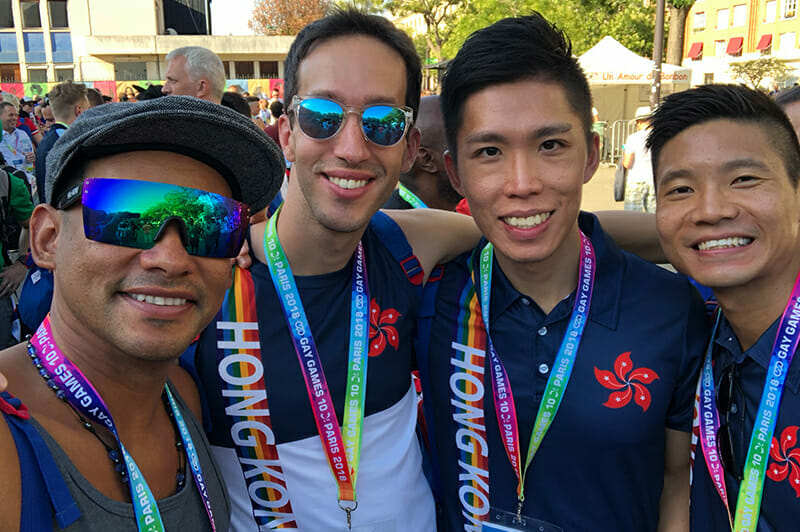 Did you bring home any medals?

Who is your biggest mentor/inspiration?

My biggest mentor/inspiration has to be my mom. She has supported me throughout my toughest decisions and has been my biggest cheerleader throughout my new crazy adventures.

What was your favorite part of the Paris Gay Games?

My favorite part was meeting people from all over the world who share the same passion as I do. All of us have invested a lot of time and training to have this moment.  My training was in the pool, learning flip turns and perfecting streamlines. We all share the commitment. So, starting a conversation was easy.

Tell us about the other athletes and your experiences with them.

This experience has taught me that everyone has a reason for taking up a sport, whether they were an athlete in college or they use their sport as I do as a therapeutic course of action. Swimming is a spiritual journey for me.

What’s one thing you would want the OutClique readers to know about the Gay Games and your experience?

I want everyone to know that it is never too late to learn something new. The first Gay Games in 1982 made it possible to stand for who we are when it was once forbidden. I am proud to be an LGBT athlete. I continue to train because I feel the experience makes me a better person, and that experience is here for anyone who wants it.

What’s next for you? Will you be competing in the 2022 Gay Games in Hong Kong?

In order for me to continue with the sport, I definitely need a specific goal to reach.  The 2022 Gay Games in Hong Kong will absolutely keep me focused to continue practicing. I have never been to Asia, so there is a lot to look forward to.