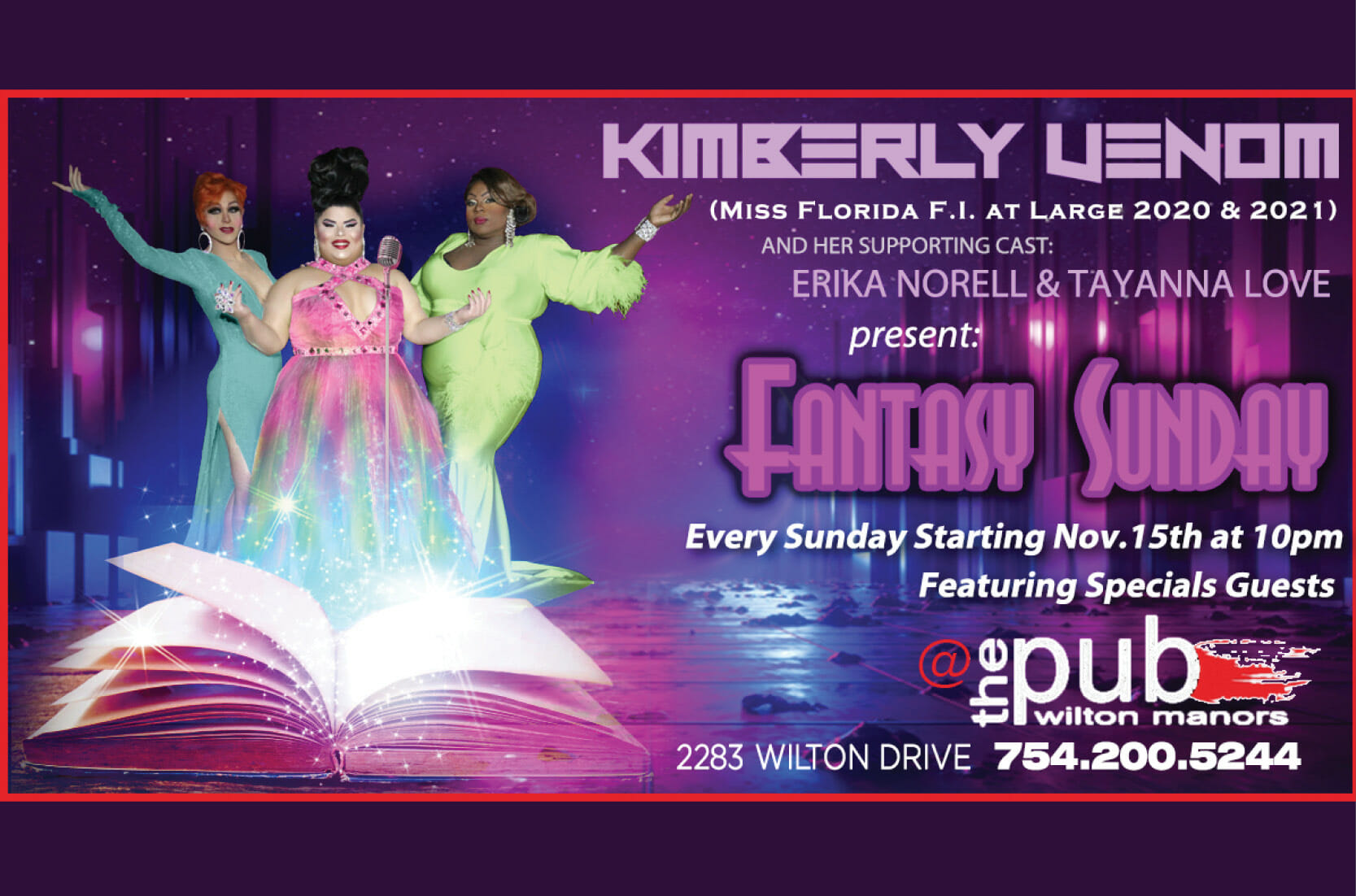 At The Pub Wilton Manors with Miss Kimberly Venom

Venom can kill and is rarely sweet, but Miss Kimberly Venom (aka Kimberly Gomez) kills it on the stage while being one of the sweetest people you’ll ever meet. She’s now launching a new show at The Pub Wilton Manors that will be the perfect way to end your Sunday Funday.

Fantasy Sundays, show starts at 10:00PM, starting November 15, 2020, Kimberly told me the title says it all. “We bring you every kind of fantasy. It can be from club kid to glamour, a vixen or a party person. It all depends on people’s drag. I wanted to mix something that’s bringing your fantasy to you as the audience.”

Kimberly will serve as host for the weekly party, and be joined by two other legendary queens, Erika Norell and Tayanna Love. She has a long relationship with Erika saying, “She’s an icon, so why not cast one of my aunties?” Kimberly has nothing but love for Tayanna. “She’s a very high energy or church; she’s a powerful black woman. She gets a lot of the attention. It will be a good opportunity for ‘The Drive’ because nobody has really seen this kind of cast. They’ve seen us individually. The fans might live for us separately, but why not unite us and put us together?”

The show will be a cabaret and will practice social distancing. The cabaret part is fun, but Miss Venom says the social distancing part is hard. “I’m a very mushy-mushy person. I like to hug and kiss people on their cheek and show them that I care for them because I really do.”

Kimberly is no stranger to the South Florida drag scene. She’s the reigning Miss Florida at Large 2020, and has been a part of the community for 12 years, since she was 18. For Kimberly it’s not an act, it’s an art. “I like doing my art of drag. I show my heart. That is what’s important because I don’t want people to see just a dancer on stage. I want them to see the true me, what I embrace, and what I give. Performing is something I love to do. I do love the spotlight, and I do love attention of course. I love wearing gowns, bodysuits, glitter, and stones.”

Kimberly is already a fave among The Pub’s clientele, often being requested to make a guest spot during Saturday night’s #DrinkNDrag, and she doesn’t hesitate to return the love. “I got to meet the owner, I got to meet the people, and I just started getting very close. These three years I started falling in love with it. It’s like my second house basically.”

The owner of The Pub was at the press day to prepare and promote the show, and it’s clear he’s Kimberly’s biggest fan. He can’t wait for this to premiere, adding it’s “the highest energy show on ‘The Drive.’ Kimberly puts everything into her show and the audience is focused on her.”

As if launching a new show during a pandemic, with seating limited (a.k.a. get there early!) and, if concerns about crowds weren’t enough, there’s an extra layer of responsibility on Kimberly. Despite being a reigning Miss Florida at Large and a winner of myriad contests and titles, she’s never taken center stage and hosted her own show. That’s just giving her even more energy. “Starting this new show is why I’m excited. It brings me back to my art.”

For more details on shows and specials at The Pub Wilton Manors, visit them at www.ThePubWM.com.

Join Our Friends the Coral Springs Museum of Art Exhibit : 100 FACES OF WAR

Wilton Manors’ 75th Anniversary to be Commemorated by Business Group