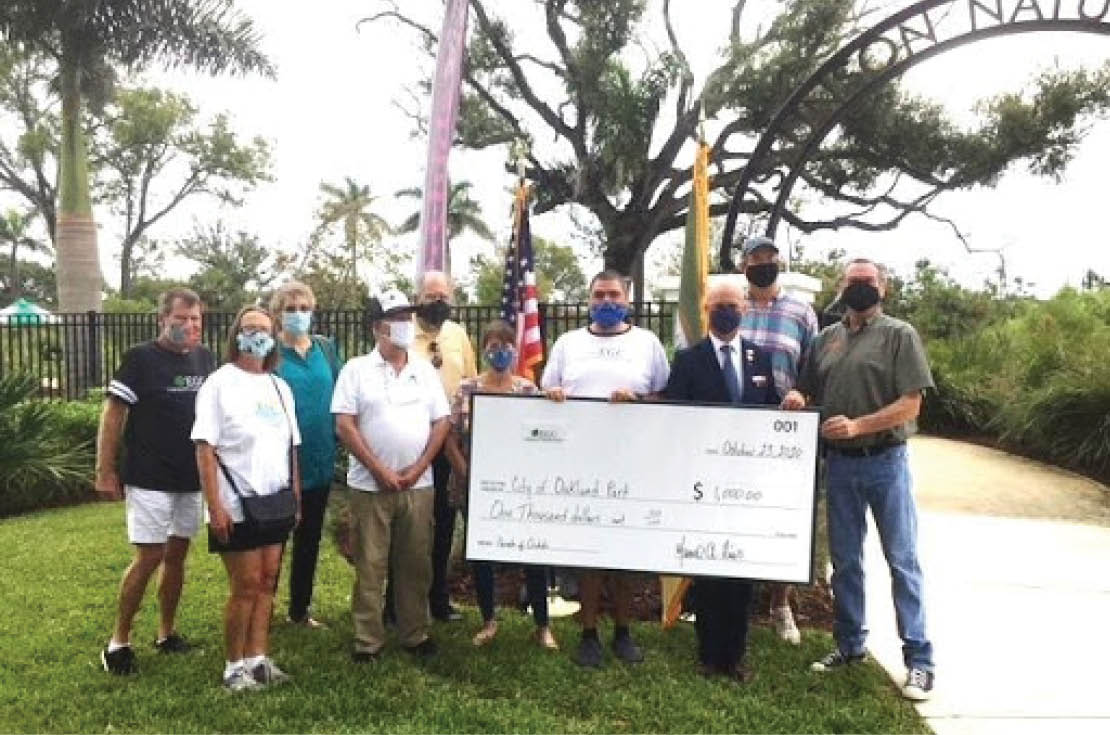 Members of the Equality Garden Club, Urban Farming Institute, Fort Lauderdale Orchid Society, Oakland Park’s Community Volunteer Corps, and City Commissioners were on hand for the ceremonial check presentation and the unveiling of a new informational kiosk that helps explain the significance of the Parade of Orchids and includes photos of some of the thousands of beautiful native orchids that volunteers have planted along the Stunson Nature Trail at Royal Palm Park.

“The Equality Garden Club is thrilled to be a part of the “Parade of Orchids” initiative, not only from a financial aspect, but as committed partners in seeing this successfully completed,” says Equality Garden Club Treasurer and Chairman of the club’s orchid project, Mario Rios. “Furthering our efforts to encourage environmental sustainability and beautify our communities, the EGC Board engaged in extensive review of Fairchild Botanical Garden’s [MOP] which plans to bring indigenous orchids back into Southeast Florida. We are pleased to be able to donate to this wonderful project in Oakland Park.”

“This project will create a beautiful and harmonious space of reflection,” added Oakland Park Mayor Matthew Sparks. “We envision the orchids as a stunning tribute to the first responders, medical professionals, and Oakland Park employees whose commitment to serving our community has never wavered.”

South Florida was once an orchid paradise, with a rich variety of tropical orchids growing naturally on the branches of every tree. In the late 1800s, as the Florida East Coast Railroad extended southward, orchids were among the first natural resources to be exploited. Flowering orchids were ripped from the trees and packed into railroad cars, destined to be sold as disposable potted plants in northern flower shops. Orchid populations dwindled rapidly, and now our iconic native orchids exist in such small numbers that they have little hope of recovering on their own.

To learn more about the Parade of Orchids at Stunson Nature Trail and make a donation of one or more orchids, please go to www.OaklandParkFL.gov/626/Parade-of-Orchids-at-Stunson-Nature-Trail. View photos of the ceremonial planting of the first 100 orchid plants at Stunson Nature Trail at https://bit.ly/OPStunsonOrchids. View MOP’s Outplanting Tutorial at www.YouTube.com/FairchildChallenge.

Equality Garden Club is a 501(c)3, non-profit garden club, based in Wilton Manors, Florida. The club meets the 3rd Wednesday of the month at 7:00PM in the Wilton Manors Hagen Park Community Center, providing world-class speakers to educate and entertain the membership. Currently the Club is providing these as virtual meetings via Facebook Live and Zoom. Additionally the club sponsors the popular annual Tropical Plant Fair in March at Richardson Park, in Wilton Manors, along with The Green Initiative and by providing grants to local gardening related projects and organizations.

The Broward Center for the Performing Arts: Education Classes for Adults