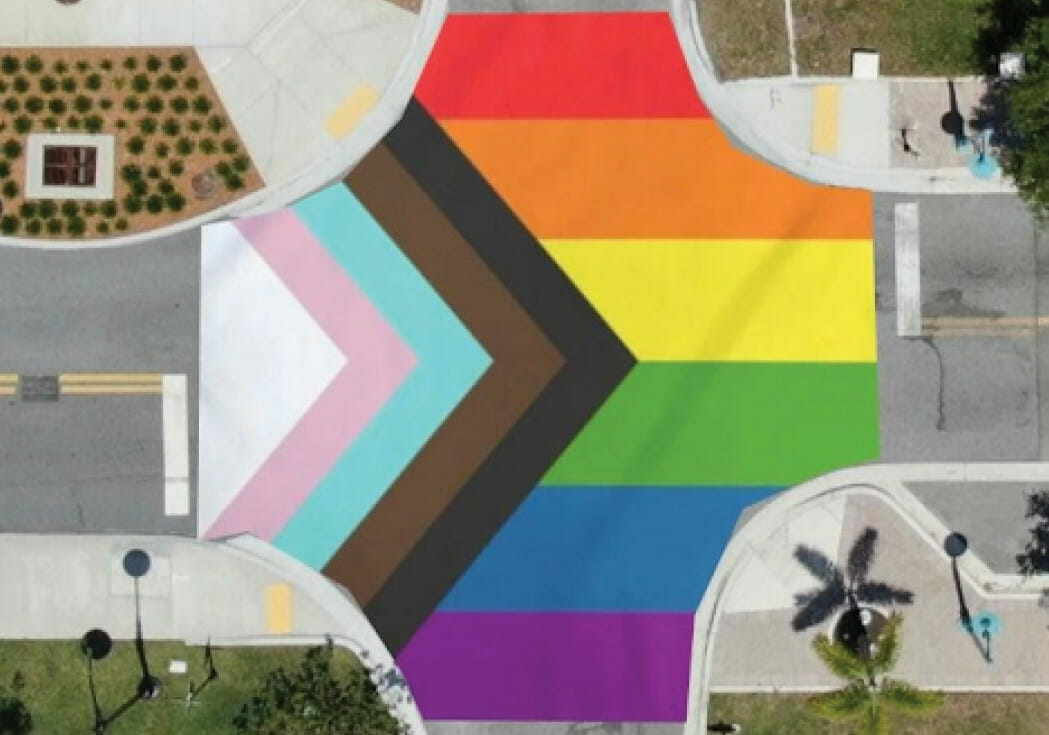 After a wait of more than two and a half years, the City of West Palm Beach now has four traditional LGBTQ Pride crosswalks in Northwood Village, the heart of the city’s LGBTQ business district. The crosswalks, which include red, orange, yellow, green, blue, and violet stripes, reflecting the six colors in the traditional Pride Flag, were completed on Thursday.

“Business owners are thrilled with the crosswalks,” said Will Davis, President of the Northwood Village Merchants Association. “They are beautiful — and definitely worth the wait.”

Rand Hoch, President and Founder of the Palm Beach County Human Rights Council (PBCHRC), initiated the request for the crosswalks in 2018. At the time, Hoch served as a member of the city’s Art in Public Places (now ArtLife WPB).

At the August 2018 Art in Public Places (AiPP) meeting, Wendy Morse, then-Director of the Office of Public Life, reported that artwork could be incorporated in more than 50 crosswalks throughout the city that needed to be refurbished.

While several of AiPP members smiled and nodded in agreement, a few appeared to be confused.

To address the confusion, Hoch sent an email to Sybille Welter, the city’s Administrator of Public Art and Culture, for her to share with the AiPP members.

“Since 2012, cities with LGBTQ communities have painted crosswalks with the colors in the Rainbow Flag (an LGBTQ symbol),” Hoch wrote. “ Cities include, but are not limited to, Washington, D.C., Philadelphia, San Francisco, Atlanta, Key West, San Antonio and Seattle.”

Over the next few weeks, Hoch discussed the crosswalks with then-Mayor Jeri Muoio and each of the city commissioners. All expressed their support.

PBCHRC then reached out to LGBTQ residents and business owners for suggestions for the location of the crosswalks.

“The consensus was to install the Pride crosswalks to be at the intersection of Northwood Road and Spruce Avenue,” said Hoch.

City Commissioner Kelly Shoaf, whose district encompasses northern West Palm Beach, led the effort for the installation of the crosswalks. Because of construction delays and a contractor who reneged on completing the project, two years passed before any work was undertaken.

Earlier this year, the city hired Claudia Mendoza of IQ Construction, a Minority Women Business Enterprise, to take on the project. IQ Construction previously had done work for the city and once hired, completed the project in record time.

Public artwork incorporating the Progress Pride colors also are in the works for Delray Beach and Boynton Beach.

of more than 160 laws and policies providing equal protections,

rights, and benefits for the LGBTQ+ community.

The Tony Award-winning Musical is Coming to the Broward Center for the Performing Arts January 11-23, 2022.