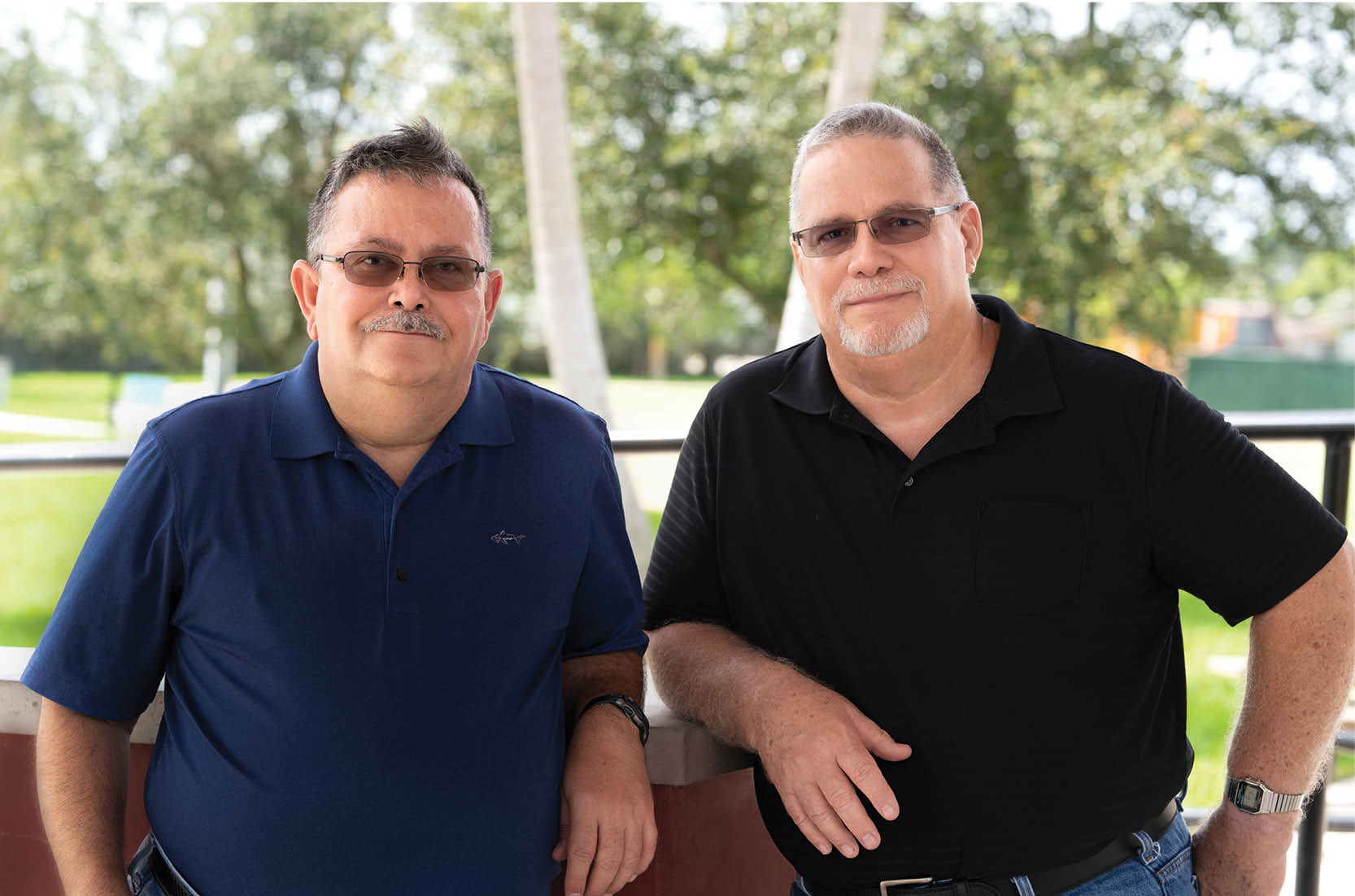 This series focuses on individuals who give to our community and make a positive impact on the lives of others. Often it is through our personal adversities that we discover who we are and transform the challenges into strengths.

In this Veterans’ Day special edition of “What Makes Us Clique” we focus on two individuals for whom service to others is a way of life. These devoted souls are driven to improve the world, and we’re all better off for their efforts. Tom and Alain, friends and roommates who share a common trait of lifelong service, both have served in the military. Tom founded A Celebration of Friends, a social group of older gay men and their admirers. Alain volunteers tirelessly to the organization as well. They both sat down with us to discuss their service to our country and to the very special community of men of a certain age.

Andy Armano: Since we’re celebrating Veteran’s Day this month, I want to welcome both of you and thank you for your service. I want to start with your military service. Could you talk a bit about your service?

Tom Pence: I entered the Marine Corps in 1972, right out of high school. My MOS was a 7041, a job description which was Aviation Operations. I worked flight clearance for stat reporting. I was overseas for Operation Babylift and the evacuation. I got out as an E5 in 1976. Being in the Marine Corps was fine. What we were doing then, pulling out of Vietnam was not as good an experience, and war is not a good experience. I don’t want to go into any further detail if that’s okay. I don’t like to talk about myself, as you can well tell.

AA: I completely understand, and we appreciate your service. Alain, tell us a little about your service?

Alain Lecusay: Well, I was born in Cuba. I came to this country in 1970 when I was ten years old, and now I’m 63. I joined the Marine Corps in 1979 after I got out of high school. I went to Parris Island and from there on I was mainly on the West Coast, in California, and went to the Pacific. I stayed in the Marine Corps for 23 years and eight months. I retired as a Master Sergeant E8. My job title was logistics, which is supply, purchasing, and contracting, bookkeeping. So, I’ve never been to war. I’ve just been a desk jockey. We order everything and anything that’s needed.

AA: You both carry a strong spirit of service. Tom, how did that inform your decision to start A Celebration of Friends?

TP: Mature men are getting more popular now because there are so many of us, but back in the day, 20 years ago, when a guy put a little bit of age on, he had no place to go and nothing to do. I have always been an admirer of mature men all my life. Instead of going to the center of the crowd, I’d go seek out the older men there. And, for a large part, the gay community usually centers around the young and beautiful. A Celebration of Friends was my way of giving to the community and creating something of value for others. I formed A Celebration of Friends in 2002. In nearly 20 years, we’ve raised just under a quarter of a million dollars that we’ve given to charities, mainly gay charities. We raise funds by having celebrations and conventions every year.

AA: How did you and Alain come to work together on this project?

TP: When I first came here to Fort Lauderdale and tried to get my board together for A Celebration of Friends, I probably went through 150 people. And out of all the people there, Alain was probably the one that if he told me he was going to do something, he did it. He was also the only one satisfied with the pay, which paid nothing as a non-profit. I don’t make a salary. He doesn’t make a salary. It’s a lot of work. God bless it, it’s hard work keeping any group happy, but put old men in this group – all those cranky guys set in their ways – and then add the gayness and drama and, well, I think it’s more exciting.

AA: What is A Celebration of Friends up to these days? I’m sure the pandemic has impacted your live events.

TP: Our celebration this year was going to be in June, down in Key West, Florida, but we had to cancel it. We were running a weekly coffee klatch for people that couldn’t get out and didn’t have anything else to do Saturday mornings. The virus stopped that. After three months, my people were all going crazy. They said, “Tom, Tom, stop this. We’ve got to see each other. We’ve got to do something!” So, I heard about Zoom. I started a weekly Saturday morning virtual meeting for mature men and their admirers, and we’ve got people now from all over the world. We’ve got people coming in from China, from Scotland, from England, from Canada, the West Coast, and Belgium.

AA: How has that been going?
TP: Great. We have men joining us from as far away as France and Japan. We have a new member who is Hindu and from India. This is the first place he can go where he can speak openly. It’s really a wonderful experience listening to these guys.

AA: I know things are different now during the pandemic, but what has been the most rewarding part of your work with the group, Alain?

AL: Meeting so many people. I keep the database and run the registration desk, so I have the chance to really meet and get to know a lot of people. I get to see most of them every year when they come to the conventions. It’s like a big family because you see them every year. That’s rewarding.

AA: A lot has changed in the years since you founded the group. Has that been evident in your experience?

TP: Yeah, we have come so far with acceptance in this country. I was working for the city, and I lost my job because somebody saw me walking across Orange Blossom Trail going to the Parliament House. Friday night, somebody saw me, so by Monday, word was out, and by Tuesday, I didn’t have a job. Fast forward to when A Celebration of Friends went to Orlando. The mayor wrote us a very nice letter saying that he was proud of everybody who was there. They wanted to make it known that Orlando is gay friendly and proud of it. After working for the city that was so afraid of gays 30 years ago, to see how friendly it had become is quite the accomplishment.

AA: It’s vital in our community as we grow older to have ways not to be isolated. The gay community can be kind of rough with ageism. I just think it’s remarkable what you do. Thank you for your service to your country and to our community.