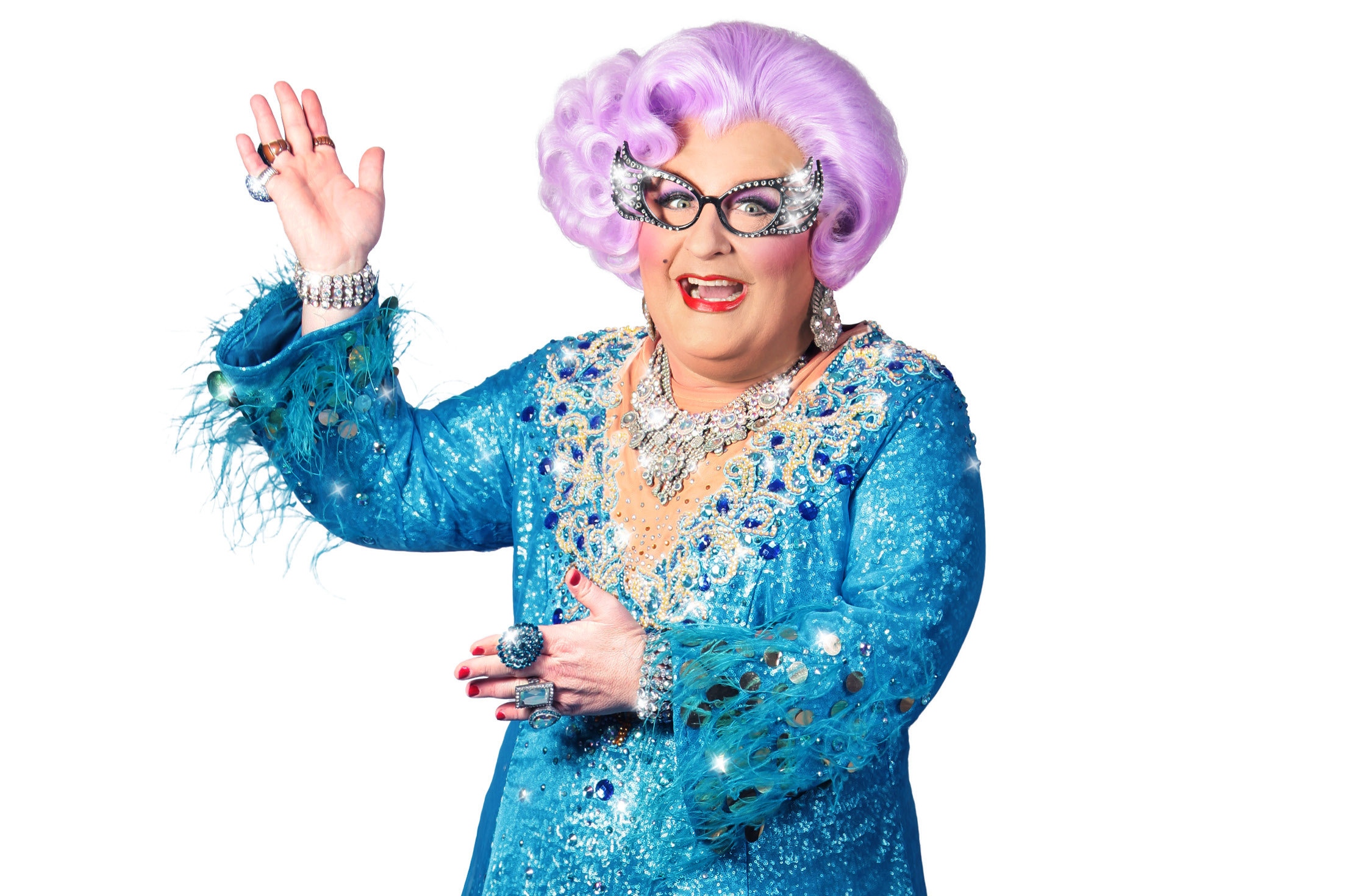 “If you can’t laugh at yourself, you’re missing the joke of the century.” -Dame Edna Everage

The fabulous frock. The bejeweled glasses. The attitude. Dame Edna rules her roost at the Monkey Bar at Georgie’s Alibi like none other. Faithful possums flock in Monday nights for music and comedy with no holds barred. The character was pioneered by Australian Barry Humphries back in the 1950s. In Fort Lauderdale, the iconic character is portrayed by Michael Walters.

He’s celebrating a decade at the Monkey Bar, a room he says has become a home. “It’s fun for me. I still can’t believe it’s been ten years,” Michael said. Every Monday, a crowd of regulars and newbies pack the room for a comedy and broadway-style music. Now if you know the original Edna, you know she doesn’t sing much, and when she does it’s not great. “They’re there to see what I do with the character,” he told me. “Usually they’re in for a surprise. If you hear the real Dame Edna sing ‘It’s not pretty!’ It’s hideous.” Michael has expanded the character, letting us know more about Ms. Everage. A lot of people don’t know that Edna has three children and one that she never talks about because the baby girl was kidnapped by koalas. “Turns out that child was, in my world, Susan Boyle, and she has taken away the opportunity Edna had to become a world class singer.” That answers so many questions. “She put her family last. She left them behind and sought her own dream.”

Michael hasn’t always been a Dame. “I’m a more rounded performer than people might think, and I’m not just talking about my [butt].” He’s been performing for 39 years, a proud Actor’s Equity member, and a Carbonell winner for his role in Pirates of Penzance. Before Edna, he worked for a few years at Walt Disney World in some of their live productions, but doing three to four shows a day marching, waving, dancing, and yelling can take its toll. In his heart, he knew it wasn’t his true calling. “I’m not what you’d call a ‘corporate entertainer.’ I don’t fit in well with their mold of central casting,” he told me. He was looking for something more adult. “I’m somebody who’s likely to say something horribly offensive. Or at the very least, not PC. I despise PC culture. You have to laugh at the world or you go mad and spend your days looking for things to be offended by.”

Eventually, Dame Edna worked her way into his life in Wilton Manors at a time he was ready to retire the character. “I was hosting a Dame Edna look-alike contest. Hosting it because they didn’t want me to enter it because they said it would look like you’re a ringer.” He made his way through the community and bar owners began to ask if he had a show. He didn’t, but he didn’t say that. He developed one on the fly. In the pre-Youtube® days, he had to track down videotapes and recordings of Edna’s shows. His voice was easily in the range and Michael worked on the costume and mannerisms. “That was one of the things, when I started doing this, I was determined that I wanted to make this my own.”

It was around this time that Michael met his partner of ten years Doug Michael Lucas, who is responsible for managing schedules, running the shows, and keeping Edna’s hair in showroom condition. “Without Doug, I would have retired this character ages ago. He keeps me centered, sane, and focused. We fight like cats and dogs, but every couple has their differences, especially when they work together.”

By the time Edna was ready to run amok in Wilton Manors, Georgie’s Alibi was looking to expand its slate of entertainers. “[Alibi] is the founding flagship, that started live entertainment on The Drive.” The showroom got a makeover this fall, but Michael started when the room was even less conducive to a live performance. “I didn’t really have a stage. I had this little thing up there.” Now he has a room fit for the show and a loyal crowd that loves the show.

If you’re new to Dame Edna, he has a warning: put down your phones. He’s putting on a show, not some background music. Some people have learned this the hard way. “I want you to be immersed in the experience of the theater. I don’t want you to be on Grindr® the entire night. I would grab their phone away from them and humiliate them in front of an audience.” He’s not trying to be mean, that may just be a side benefit. For him, it’s all about the quality of the show. “When they argue with me they lose. I have the microphone.”

You also need to have a good sense of humor because even if you’re off your phone, you may still catch Edna’s eye and become a part of the act. “Believe me, I’ve pissed off a lot of people over the years in this room.” Remember, Edna’s quick wit and sharp tongue are what make Edna, Edna. “The funny thing is what they don’t know is if I ever thought I had hurt someone’s feelings, it would crush me. Getting a smile out of people, that’s really important to me. We need to laugh now more than ever. If I can make that happen, I’ve done my job.”

The show is two and a half hours, and it’s tough on Michael and Edna. “To stay in character, especially after a couple of [cocktails], is always a real hassle. It’s also murder on the voice. You don’t want to let people forget that they’re here to see something.”

Michael is getting ready to hit the road for an international tour, but he loves coming back to the Monkey Bar at Georgie’s Alibi. “This is my therapy. This is also my happiness. Being in here for this long makes me realize how many friends I have in this community.”