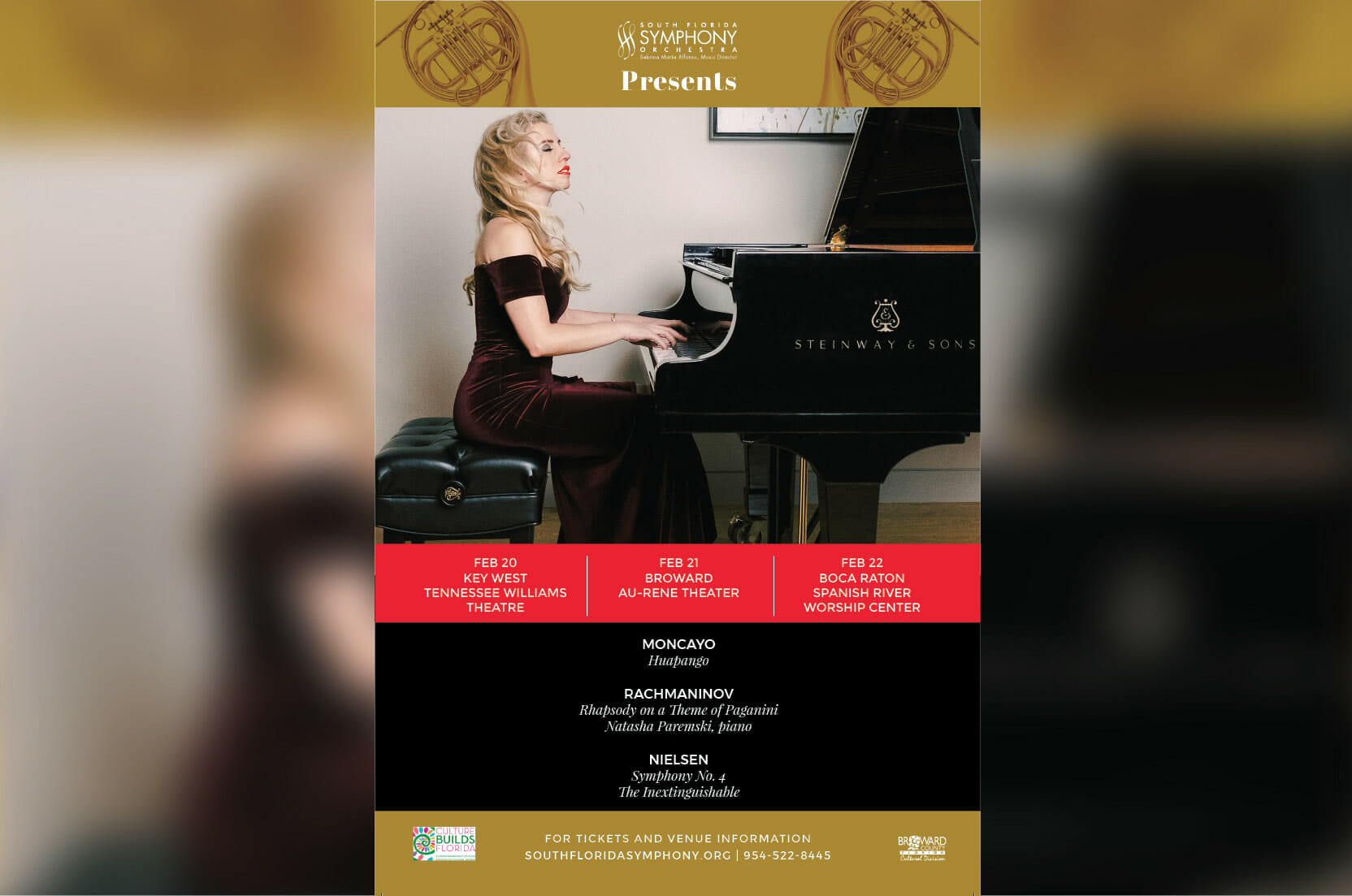 Natasha Paremski is a pianist who generate excitement and wins over audiences with her musical sensibility and flawless technique. Her striking performances reveal astounding virtuosity and voracious interpretive abilities. Audiences are invited to witness the dynamic playing of Paremski when she returns to the South Florida Symphony Orchestra for its Masterworks II Series February 20-22. She will be performing Rachmaninov’s Rhapsody on a Theme of Paganini. Paremski has been awarded several prestigious artist prizes and her first recital album in 2011 hit #9 on the Billboard Traditional Classical Chart. She has performed with major orchestras in North America and tours extensively in Europe. I had the pleasure of chatting more with Paremski about her upcoming performance and her passion for the art of music.

Why don’t you go ahead and start off by telling more about your upcoming performance with the South Florida Symphony Orchestra. Is this your first time performing with the Orchestra?

No, this will be my third time and I am really excited for my return. The first time I performed with them, I believe it was in 2004 and it was called the Key West Symphony. Interesting enough, I am playing the same piece that I did all those years ago.

Oh, very nice! Well, welcome back to the SFSO. I hear Maestra Sebrina Alfonso is fabulous to work with.

Yes, she is wonderful and as this great energy. She really knows how to bring people together in a positive way.

What are you looking forward to the most about this performance?

Well, I have played this piece many, many, many, many, many times. I think it’s one of the more popular works. A lot of composers are drawn to this piece and its themes. The tones and melodies. Many believe it provokes the demonic nature of Paganini. Paganini was a very legendary violinist in the 19th century and he believes he was supposed to supersede anyone who came before him. Legend was that he had these crazy powers and that he sold his soul to the devil to become the greatest violinist alive. A lot of composers too this theme and based their variations on it.

Is Paganini a musical influence for you?

Being that he is a violinist, he is not a direct influence for me as a pianist, but again like I said, he influenced many composers.

Who are some of your direct musical influences?

I would say my first direct musical influence would be the greatest legendary pianist Sviatoslav Richter. Martha Argerich is a big influence as well.

What do you hope to take away from this performance?

It is going to be great to see Sabrina again, it’s been awhile. I’m looking forward to seeing friends in the orchestra and being in Florida with everyone while making beautiful music and getting people excited to come to concerts.

Where did your passion for piano come from? How did it all begin?

It really all began in Moscow. I was born in Moscow and moved here with my family when I was 8-years-old. I was just drawn to this black partition that separated our 280 square foot apartment in Moscow and I just started playing around with it and fell in love with the sound. I think the piano found me. It all connected. I would hear things on the radio and play them out. My parents discovered I had a natural gift.

What would you say is your favorite part about performing?

Connecting with the audience I would say is my favorite part. It’s nice. It’s hard to explain, but you always know and feel as you’re playing. You’re telling a story and people are listening and that particular connection is really hard to put down into words, but it is extremely palpable and that is what I thrive on as a performer.

What would you say is one of your most memorable performances?

Actually, I would say one of my most memorable performances was in fact with Sebrina and the SFSO in 2013 and it was my first Rachmaninov #3 concerto. That concerto has been a real mainstay in my repertoire. I learned it very late and that piece has had quite a lengthy journey since my performance with Sebrina and her orchestra. I have performed this piece in some extremely high-profile places like with the Bergen Philharmonic. It was really cool initiation to that piece and I will never forget that.

How do you keep yourself motivated?

Music always motivates me. I have chosen this career and it has been so rewarding. The fact that I am able to pay my bills as a musician. I am so lucky, and I sometimes have to pinch myself. I do what I love. So, that is what motivates me.

Your first recital album was released in 2011 and debuted #9 on the Billboard Tradition Classical Chart. That must have been an amazing accomplishment for you.

You know, things like that, they are very nice and put notches in one’s belt as far as one’s career goes, but for me, the most important thing is playing great concerts. No matter where it is. Those kind of accolades, they are great and they are certainly very potent in one’s bio and make a difference, but for me as an musical artist, being on a billboard chart is not as important. Being able to feel that connection you and I discussed earlier while on stage, that is what I aim for.

What’s next for you? Any upcoming projects we should be on the lookout for?

Yes. I have another recital album coming out and it features Pictures at an Exhibition by Modest Mussorgsky. It’s a very legendary piece and it’s couples with variations by Tchaikovsky. Fred Hersch commissioned this for me as part of a prize I won in 2006, so I put those two pieces together, and I will also be playing Pictures at an Exhibition in Florida as part of the SFSO’s recital series.