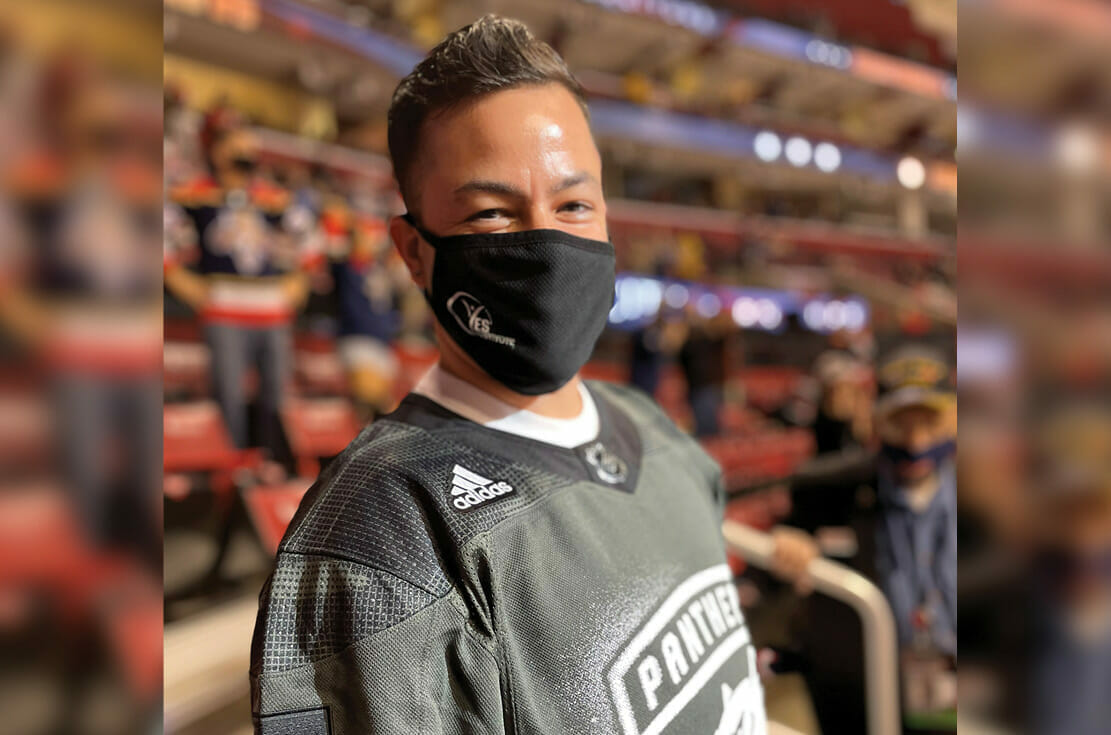 The Florida Panthers just finished a season that was short, sweet, and successful. The sweetest moment of the season was Pride Day in March, 2021. The team’s commitment to the LGBTQA+ community was on full display from the moment the team took the ice. Players had rainbow tape on their hockey sticks during warmups, and a member of the South Florida Gay Men’s Chorus performed the National Anthem before face off. Beyond that, the team honored members of the South Florida community making a difference.

Two people from YES Institute were singled out to have their stories shared in videos played on the scoreboard’s big screens above the ice. Dr. Shelly Slapion-Foote is a volunteer with YES as a clinical therapist and volunteer, giving frontline support to gay and transgender youth virtually during the pandemic.

Also honored was Umut Dursun, MA, YES Institute’s Executive Director of Education, and he shared the experience with OutClique. “I sat behind the mascot and pride flags were everywhere.” As a former sergeant in the U.S. Marine Corps (USMC), he was chosen to represent South Florida’s LGBTQA+ veterans as well as servicewomen and men, but the night was a chance for Umut to share his story as a trans man. “It was a great experience. I was overwhelmed by the visibility.” Umut says he was a little apprehensive as his story was shown to the crowd at the BB&T Center. “I had no idea what the vibe was gonna be like.”

Any apprehension was unfounded because as the video ended the applause began he felt the love and support of everyone, especially the staff of the Panthers. “I could tell I was really appreciated and they wanted to recognize gender, it wasn’t a ‘check-the-box’ sort of thing.”

Umut’s proud of his military service, which he did before he began transitioning. He served four years before leaving under the Bush administration’s growing pressure to enforce the odious ‘don’t ask, don’t tell’ policy. “I never wanted to get out, I would have retired from the Marines.” From there, Umut went on to get a masters from UCLA and gained the confidence to identify as transgender. Now he uses the leadership skills he honed in the Marines in his work with YES, an organization dedicated to educating people on gender and working with youth to help them have access to resources and support that wasn’t available a generation ago.

For Umut, his service to his community today has its roots in his service to the country 20 years ago. “The idea of service, in the military and now, all the work I’ve done has been for others.” The Panthers won their game on Pride Day, but the real winners are the fans in the stands who got a glimpse of heroes like Umut and Dr. Shelly Slapion-Foote.

Improving Colorectal Health and Reducing the Risk of Colon Cancer