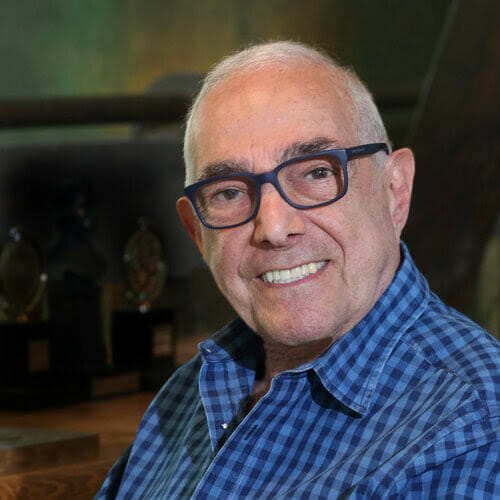 Our Fund Foundation is saddened by the recent and sudden passing of long-time supporter and friend, Bob Avian. This virtual gathering was originally intended to share a recorded interview in which Bob offers insights and stories about his broad and impressive career. Now with his passing and with his husband Peter Pileski’s blessing, we will present the interview to honor his life and legacy.
Tony and Olivier Award–winning Bob Avian’s dazzling life story, Dancing Man: A Broadway Choreographer’s Journey, is a memoir in three acts. Act I reveals the origins of one of Broadway’s legendary choreographers who appeared onstage with stars like Barbra Streisand and Mary Martin all before he was thirty. Act II includes teaching Katharine Hepburn how to sing and dance in Coco and working with Stephen Sondheim and Michael Bennett while helping to choreograph the original productions of Company and Follies. During this time, Avian won two Tony Award for co-choreographing A Chorus Line and Ballroom and producing the spectacular Tony Award–winning Dreamgirls. For a triumphant third act, Avian choreographed Julie Andrews’s return to the New York stage, devised all of the musical staging for Miss Saigon and Sunset Boulevard, and directed the hit revival of A Chorus Line on Broadway. He worked with the biggest names on Broadway, including Andrew Lloyd Webber, Carol Burnett, Jennifer Holliday, Patti LuPone, Elaine Stritch, and Glenn Close.

“When I read Bob’s autobiography I was astonished by the breadth of his life on stage. I don’t think there’s anyone who has done as much in every aspect of our field. It’s mind-blowing. His demeanor is a model for all directors and choreographers.

Not only is
he supremely talented, he has the wisdom of the great creators in our business. His life in the theatre was a page-turner, and his knowledge makes me think I haven’t even touched the surface. I have even more respect and admiration for my dear friend. What
a life. What a talent.”

“Bob Avian was a major part of my life. He was an icon in our industry and had the kindest, most compassionate soul. Rest in
peace my beloved Bobby.”

Please join us on Monday, February 8th at 7PM for a tribute in remembrance of Bob Avian’s life and accomplishments. Link to join the Zoom webinar below:

Bread and a Helping Hand to Lesotho

“From Social Bubbles to Community”: Latinos Salud’s “Blended” Anniversary Gala to Bring Guests to the Screen, Feature Live Talent, and Include a Special Announcement

Pam Ann Comes In for a Landing