Thinking Cap Theatre Presents Meet the ‘Gettes and  A Baby, A Birdcage & the Ballot Box

While 2020 has not been the year that anyone had hoped or expected it would be, Thinking Cap Theatre is here to remind audiences that there are still some historic milestones worthy not just of mention, but of celebration. This coming Election Day, Tuesday, November 3, 2020, will mark the 100th anniversary of women nationwide heading to the polls to cast a ballot for the president. The 19th Amendment, which officially granted suffrage to women in the U.S., was ratified in August 1920.
Thinking Cap Theatre (TCT), a champion of gender equality since its founding in 2010, had planned since last year to commemorate the suffrage centennial. While TCT’s main stage season remains postponed, its suffrage programming is a go! Thinking Cap Theatre is pleased to offer audiences near and far two unique suffrage-themed theatrical events: MEET THE ‘GETTES and A BABY, A BIRDCAGE & THE BALLOT BOX. The performances will be streamed live and followed by talkbacks with the cast and creative team.

Get ready to rock with The ‘Gettes, The Suffragettes, in this unique, family-friendly theatrical performance. This playful tribute to the pioneers of the 19th amendment will (re)introduce audiences to ten leading figures of the women’s suffrage movement. With an original script that interweaves primary historical documents and contemporary insights, Thinking Cap’s team of artists use dramatic storytelling to bring to life Lucretia Mott, Elizabeth Cady Stanton, Susan B. Anthony, 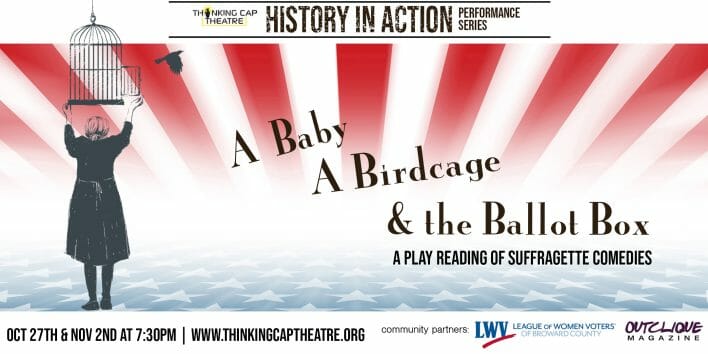 Make no mistake, America’s Suffragettes had a sense of humor. In this special lineup, audiences will experience two vintage, suffrage propaganda plays: A Suffragette Baby (1912) by Alice C. Thompson and The Parrot Cage (1914) by Mary Shaw. Dubbed “parlor plays,” these short comedies were privately printed and originally intended for amateur performance at home in, you guessed it, people’s parlors. In the late 1970s, while doing research at Radcliffe College, scholar Bettina Friedl rediscovered these long forgotten treasures and compiled them into a special edition. These dramatic gems humorously and pointedly tackle issues such as the work/life balance dilemma and the oppressiveness of socially-prescribed gender roles. Viewers  can expect to enjoy some laughs and marvel at both how far we’ve come and how we’ve still to go in the journey for equal human rights.