Fade-in to a medium close-up of Julie Marie Wade, lit in a saturated black-and-white frame reminiscent of a 1940s Hollywood studio drama. “I’d like to have a great story about how I knew exactly who I was for a long time,” Wade begins in her caressing poet’s voice, “that I had this sort of gradual unfolding into myself. But, I think the story turns out to be great in a different way.”

So begins the 20-minute documentary film Open Dialogues: Stories From the LGBTQ Community, with Wade the first of seven Broward County residents who share the triumphs and tribulations of their coming-out stories under the direction of award-winning South Florida filmmaker Freddy Rodriguez. 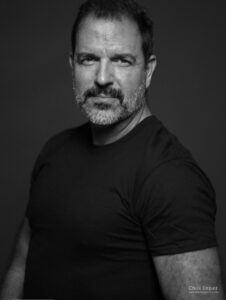 Open Dialogues was produced by the Art and Culture Center/Hollywood with a grant from the Community Foundation of Broward as part of the Foundation’s Broward Pride initiative. The film premiered in February at the Center in a gallery exhibition that included historical documents from the Stonewall Museum & Archives, and poetry from Wade’s 2014 book When I Was Straight.

COVID-19 interrupted the original exhibition dates, though Open Dialogues the exhibition and film returned in August and is on view through October 25, 2020, at the Center, 1650 Harrison Street in Hollywood, FL. It was an Official Selection of the 2020 OUTshine LGBTQ+ Film Festival and will be screened in November during the 35th Annual Fort Lauderdale International Film Festival (FLiFF).

The Center and Rodriguez identified a diverse cast that participated in more than five hours of interviews. The insights and experiences of all seven participants were deeply personal while covering such universal themes as love and relationships, friends and family, threats of violence, and religion and spirituality. Franchesca D’Amore, a transgender member of the Hollywood LGBTQ+ Council, shares overcoming three suicide attempts before coming to a place of self-acceptance.

“It’s not often that I get impacted so deeply with a project,” Rodriguez says. “As a married gay man, who lives safely in a Miami suburb, I have become completely complacent with the LGBTQ+ struggle. Working on Open Dialogues reminded me that hate and misunderstanding not only play a powerful role on how we are perceived as a community, but plays an even more important role on how we perceive ourselves as gay people. The stories in Open Dialogues are real, powerful, and raw. Prepare yourself.”

Wade is an acclaimed author of 11 books who teaches creative writing at Florida International University. Dan Bassett is Assistant Principal of St. Mark’s Episcopal School and the artistic director of the South Florida Pride Wind Ensemble. A native of Jamaica, Christine Walters is Co-Chair of the South Florida Bisexual+ Network and is completing her course work to become a veterinarian specializing in exotic animals. Puerto Rico native Omar Morales was a news correspondent for Telemundo and currently works at SunServe in Wilton Manors.

Two long-time Broward residents, Michael Goodman and Gary Keating, provide a generational perspective about Broward’s evolution as a relative LGBTQ+ safe haven. Goodman is the owner/founder of GPR/Goodman Public Relations who also performs nationally under the stage name Michael Dean as Cher. Keating is the Director of the Fort Lauderdale Gay Men’s Chorus, which he founded in 1986.

“Open Dialogues is one of those rare projects that truly connect,” Rodriguez says. “It has impacted me, impacted the folks we interviewed, and it impacts our audience in a deep and meaningful way. What more could you ask for from a film?”

Learn more about the Art and Culture Center/Hollywood and the short film Open Dialogues at www.ArtAndCultureCenter.org/Open-Dialogues.

Dr Steven chats with David from the Palm Beach Symphony

Palm Beach Symphony Strikes a Major Chord in the Community