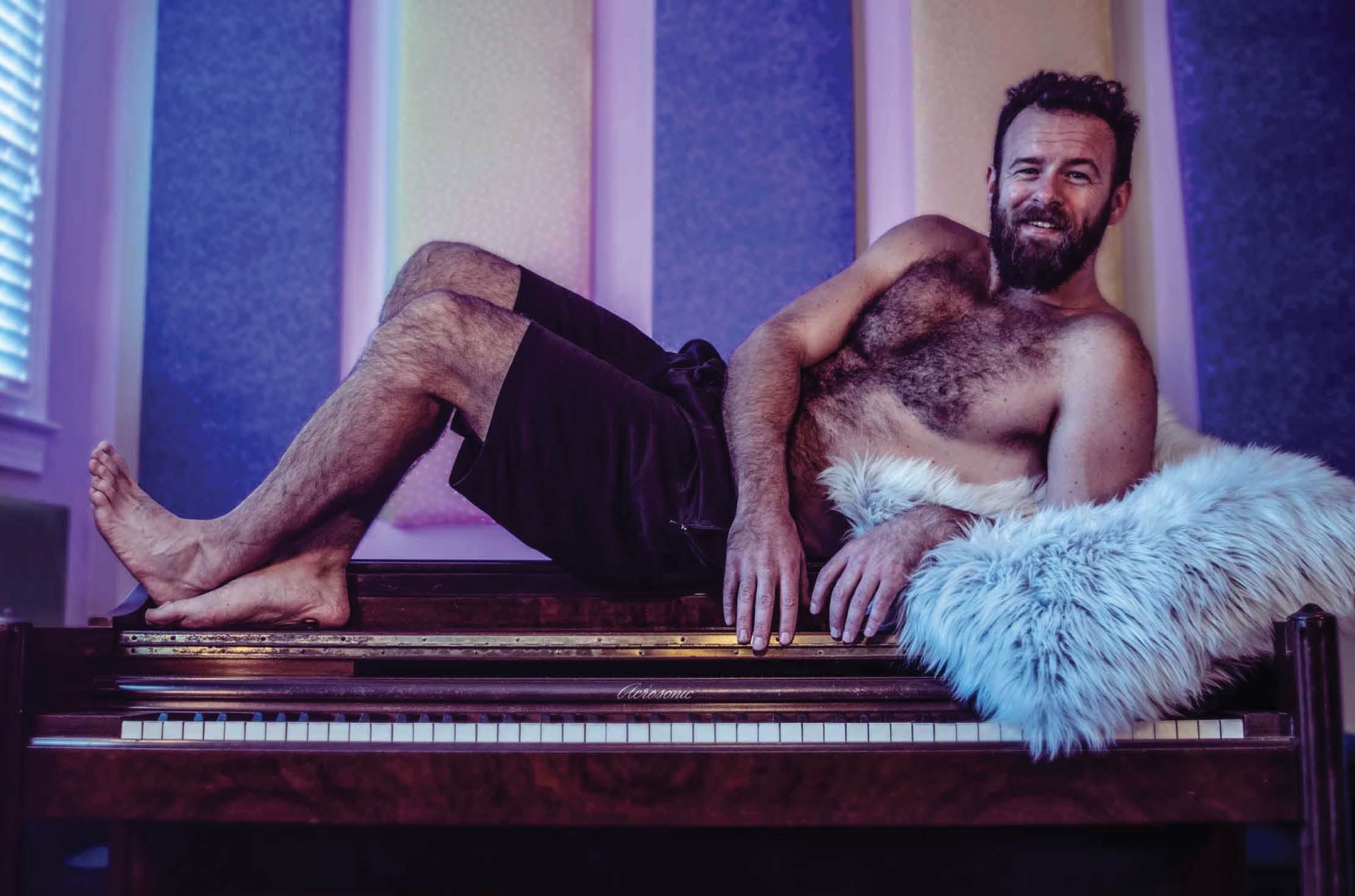 Gregg Shapiro: Of the nine songs on Borrowed Tunes, vol. 1, five were written by women. You transform dance tunes such as Robyn’s “Call Your Girlfriend” and the Whitney Houston hit “How Will I Know?” into heartbreaking piano and vocal ballads, something that worked well when Calum Scott did it with Robyn’s “Dancing On My Own.” Was that in any way an inspiration for you?

Mike Maimone: While I’m not familiar with that particular artist, I know there is a history of singer/songwriters transforming upbeat songs into ballads. So, I know I’m not reinventing the wheel on this record. I just felt like I could tell a different story, using the same words and melodies.

GS: I love the way the lyrics to “Call Your Girlfriend” and “How Will I Know?” sound coming out of a man’s mouth, as if they’ve been waiting this whole time to be sung by you. Please say something about respecting original pronouns.

MM: Those two really change meaning in specific, and admittedly personal, ways for me. The former speaks to the perils of dating a guy who’s on the DL (down low). It might be thrilling at first, but then there’s nowhere to go. And you just can’t stay in that “this is new and exciting” phase forever. The latter, to me, is about being into very masculine guys, and not being sure if it could be something more than friendship. Again, thrilling to think about, but terrifying in reality! I also love how the person Whitney was singing to is a third party. She’s asking a friend’s opinion. It’s personally meaningful because I met my fiancé at an LGBTQ rock show called Bear All. We were both on the bill. Turns out we independently went up to the promoter and asked if the other was really gay before approaching [laughs].

GS: Both Fiona Apple and Regina Spektor are pianists, so they are a natural fit for the album, and like the previously mentioned songs, they are complemented by a man’s touch. What do these songs mean to you?

MM: Fiona Apple is my goddess and I worship her records like scripture. Her newest album is unbelievable! I just loved the way “Paper Bag” shines a light on how imperfect a gay relationship can be. A lot of my straight male friends tell me about their relationship problems, and then they’ll be like, “Oh, but you wouldn’t understand, you date dudes.” My response is that men are generally less emotionally advanced than women, so putting two of us in one relationship can be a recipe for disaster. I think that the way Fiona allows herself to come off as unhinged, and the way she characterizes the man as “just little boy” was so perfect. “Samson” is a really personal song, too. My fiancé is a big strong man who likes snacking in the middle of the night. Except I was the one with long hair when we first met! As a gay Catholic, I also love the lyric that “the Bible didn’t mention us, not even once.”

GS: Do you know if Angel Olsen has heard your version of “Shut Up Kiss Me” and did you ever cross paths with her while she was living in Chicago?

MM: I did not, but I hope she hears my cover someday and that she loves it and we can hang out. I could learn a lot from her.

GS: The songs written by men are not your typical set of cover tunes by any means. George Harrison’s “I Live For You” is the oldest song. What was it chosen?

MM: I just adore that song. Back in Chicago there is a DIY venue called the Red Room. It’s like musicians’ nirvana. Such a cool vibe and amazing community of artists who run it and keep it alive. They invited me on a George Harrison tribute and I asked to cover that song. Learning it felt like I was let in on some kind of magic. Some songs have that power. And I realize they’re different for everyone of course. But for me, this is one of those magical songs.

GS: Every time I hear the U2 song “One” I think about the music video with the bandmembers in drag and the artwork by the late gay artist David Wojnarowicz that U2 used for the single. In other words, it’s U2’s gayest song by far. Is that why you decided to cover it?

MM: No, but now I know I need to look into the story behind this! I always learn something when I chat with you, Gregg [laughs]! Admittedly, I never really got into U2. But this song has always stood out to me, and it is more relevant than ever. I think that the most famous versions – the original, Johnny Cash, and Mary J. Blige – are incredible, but they all sound powerful. A need for power is part of the problem today. I wanted to focus on the vulnerability and empathy required to truly unite despite our differences.

GS: Is there a Borrowed Tunes, vol. 2 in the works?

MM: Yes. It’ll have more full-band arrangements, at least a few tracks. I want to do studio recordings of some of the mashups we do live, like “Juicy” + That’s Life and Fresh Prince meets Gershwin “Summertime.”

GS: If the original songs on isolation:001 are any indication, isolation during the pandemic has been good for your creativity. Would you agree?

MM: I would. They say creativity comes from discomfort. And the world just flipped inside out and lit fire. I am positive we will see some of the best art in history come out of 2020 around the world.

GS: If there’s a common denominator to the nine songs, it would be the dark humor – especially on songs such as “Shouldn’t Have Sold My Drum Set” and “We All Gotta Die.” Please comment.

MM: That’s kind of just my wheelhouse. I’m a “if we don’t laugh, we’ll kill our elderly and eat them” kind of guy. Humanity is capable of insanely horrific acts, both to ourselves and our habitat. We’re a virus on the planet, and it’s only so long before the Earth gets rid of us and gets back to symbiosis. So, in the meantime, we should try to have a little fun.

GS: Is it just me, or is the album, especially songs such as “yeahyeahOK,” “can’t stand it,” and “Dirty” more experimental than your previous outings?

MM: Definitely. This is the first full album that I’ve recorded and mixed entirely by myself. Not even any other musicians to track parts. It was just me, my piano, a computer, and whatever I could find in the house for percussion. I think that when I write for my bands, Mutts or my solo band, I subconsciously am thinking about a certain framework. If you’re thinking, “this is going to have other humans involved,” that will steer you down a certain road. But on this record, I opened a Pro Tools session and started [messing] around with 808s and samples of me banging a pot with a wooden spoon. I never intended for anyone else to get involved. It was a completely different process than any other record I’ve done. I honestly look forward to getting back to working with bands. The album cover is real. I started to hate myself after so long laboring over the minutiae of producing and mixing my own record.

GS: Finally, when we spoke earlier, you mentioned the “COVID coaster” that you experienced since the beginning of the year, which included relocating to Nashville, the loss of your dog, a tornado, and the toll it’s taking on your relationship. How are things in your life at present?

MM: Ugh. How are things in anyone’s life right now?! My partner and I are surviving. We went to couples’ therapy, and I highly recommend that to anyone. It’s been a brutal two years. He lost his sister, his mom, and shortly after we moved, we lost our American Bulldog without warning to cancer (he was Dad #1, I was honored to be Dad #2). I’m really just trying to be there for him, and it’s been humbling to realize that I still have a long way to go in terms of caring for another individual. My side of the family is also coping with a tragic loss, as well as some mental health issues. It sucks for everyone and a lot of people have it way worse, so I can’t complain.

Museum of Discovery and Science: The Science of Beer: Home Brew Edition

Seasons 52 Chef Elvis Bravo returns to Facebook Live with a hearty recipe for Bone-in, Dry-rubbed Pork Chop with German Red Cabbage on Tuesday, October 13, at 2 p.m. His livestream is part of The Galleria at Fort Lauderdale’s Cooking with The Galleria virtual series.