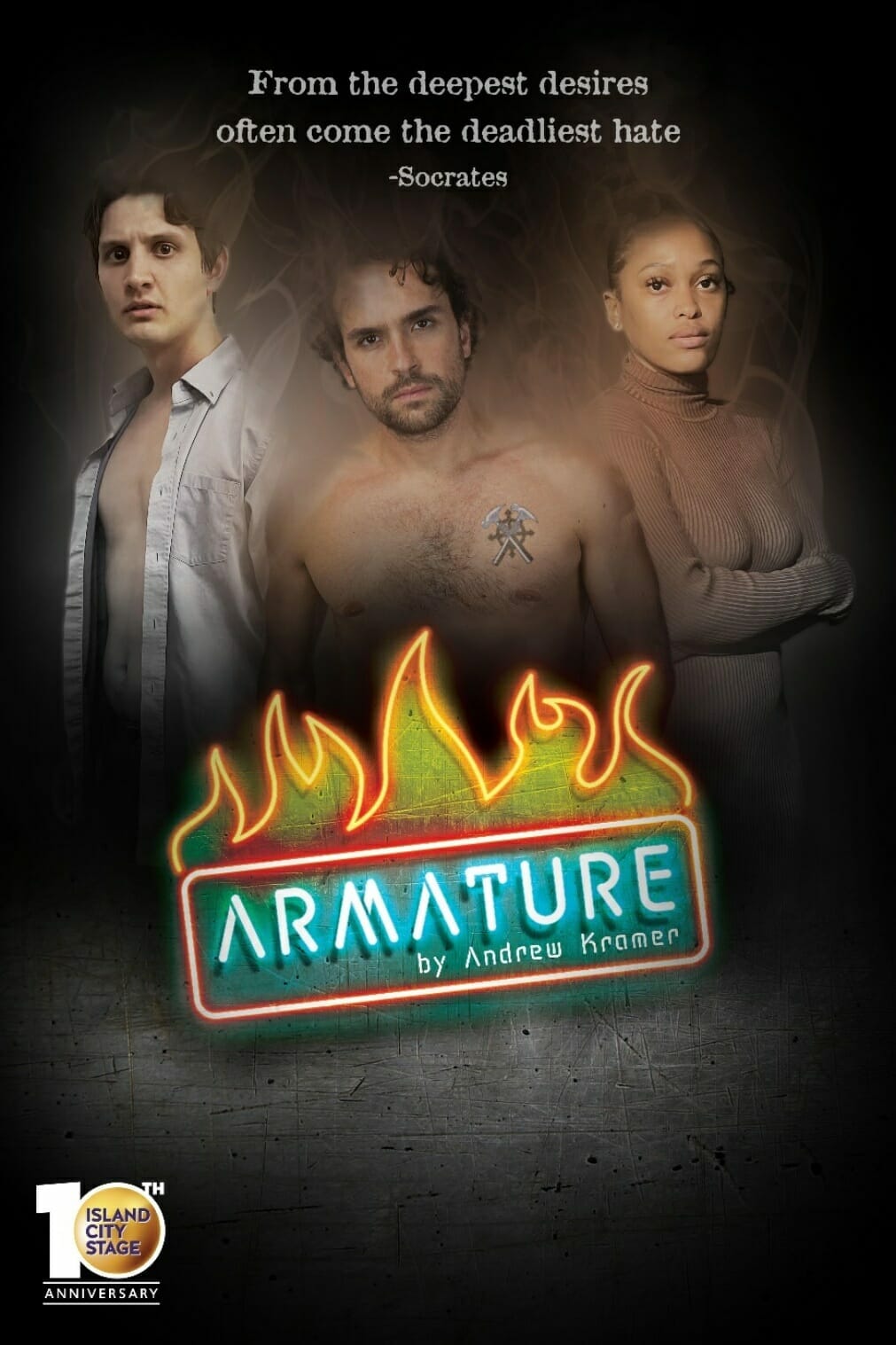 Directed by Michael Leeds and Andy Rogow, Armature is a searing story of love, lust and betrayal. A “burning” is the undercurrent of this gripping drama of which the Armature Bar is at the epicenter. The play connects the stories of two sexy, troubled gay men and a Black family whose matriarch is running for political office.

Candidate Blythe Ames prepares – with a voice as smooth and strong as a song – for the upcoming governor’s election. Her husband Denson should be happier for her political success. Her daughter Monica should stop dyeing her hair. Across town, pop-culture blogger Evan meets sexy stranger Shod at the dark and sordid Armature Bar where Mama serves the drinks – if he’s able to avoid the reporters. The lives of these very different people collide as a roaring fire erupts with biblical wrath and passion, devouring everything in its path.

“Island City Stage is thrilled to present the world premiere of Armature,” said Andy Rogow, artistic director of Island City Stage. “Theatre-goers are sure to become immersed in the compelling stories of these richly nuanced characters. The timely themes of this new production are exactly what we love to explore.”

Karen Stephens (Blythe) is an award-winning South Florida theatre veteran. Her most recent role was Winnie in Thinking Cap’s production of Beckett’s Happy Days, and before that she performed the role originally created for her in the Southeastern premiere of Christopher Demos-Brown’s American Son at Zoetic Stage. She was also seen in Miami New Drama’s, The Bridge of San Luis Rey, Gablestage’s Kings and Primal Forces’ Having Our Say. A multiple Carbonell nominee, Karen was awarded the Best Actress award for another Christopher Demos Brown play, Fear Up Harsh, produced by Zoetic Stage. She is also the recipient of four Silver Palm Awards, a Curtain Up Award and the Palm Beach Cultural Council’s Randolph A. Frank Prize. She is a proud member of Actor’s Equity Association.

Matthew Salas (Evan) is an actor and director from Fort Lauderdale. After spending two years studying at the Boston University School of Theatre, he has returned home to begin his career on stage. Previously, he appeared as Director in Shakespeare Is a White Supremacist with the Main Street Players, PFC Louden Downey in A Few Good Men at PPTOPA and Christopher Hirshhorn in Boys of a Certain Age at Empire Stage.

Michael Ford (Shod) hails from the east coast of Canada and made his way to New York City by the age of 17. With his roots in theatre, he has performed on stages across Canada, the United States and Scotland as part of the Edinburgh Fringe Festival. His on-camera work ranges from national commercials (Keeps.com, Daily Harvest, Garnier), to television (Bull on CBS, Little America on Apple TV+) and several independent films. Most recently, Ford can be seen as “Mojoe” in the second season of the Hulu series Wutang: An American Saga. When he’s not acting, Michael enjoys woodworking, gardening, cooking, rock climbing, and being outdoors.

Yesenia Ozuna (Monica) appeared in the South Florida productions of Colored Museum and the Carbonell-nominated production of Raisin in the Sun while serving as the lead magnet drama teacher at Rainbow Park. She’s also been in Gem of the Ocean, Radio Golf and Blues for an Alabama Sky. She is a graduate of Miami Northwestern’s Pavac Drama magnet program. and received a scholarship to attend Florida A & M University where she majored in theatre performance with a minor in communications. A proud member of Sigma Alpha Iota Fraternity, Ozuna dedicates every performance to her late mother Leanora Kerr Ozuna, the “wind beneath her wings.”

Island City Stage’s 10th anniversary 2021-22 season kicked off with The Twentieth Century Way by Tom Jacobson in October. Upcoming productions include Suddenly Last Summer by Tennessee Williams from March 17 – April 17, 2022; The Mystery of Irma Vep by Charles Ludlam from June 9 – July 10, 2022 and One In Two by Donja R. Love from August 4 – September 4, 2022.

Island City Stage is located at 2304 N. Dixie Highway in Wilton Manors. Tickets start at $35 per show. Season subscribers can save with a $150 Flexpass for all five productions (a $25 savings off individually priced tickets plus no processing fees) and receive $5 off of additional tickets purchased. Other discounts are available for groups.

The Prom to Play at The Broward Center