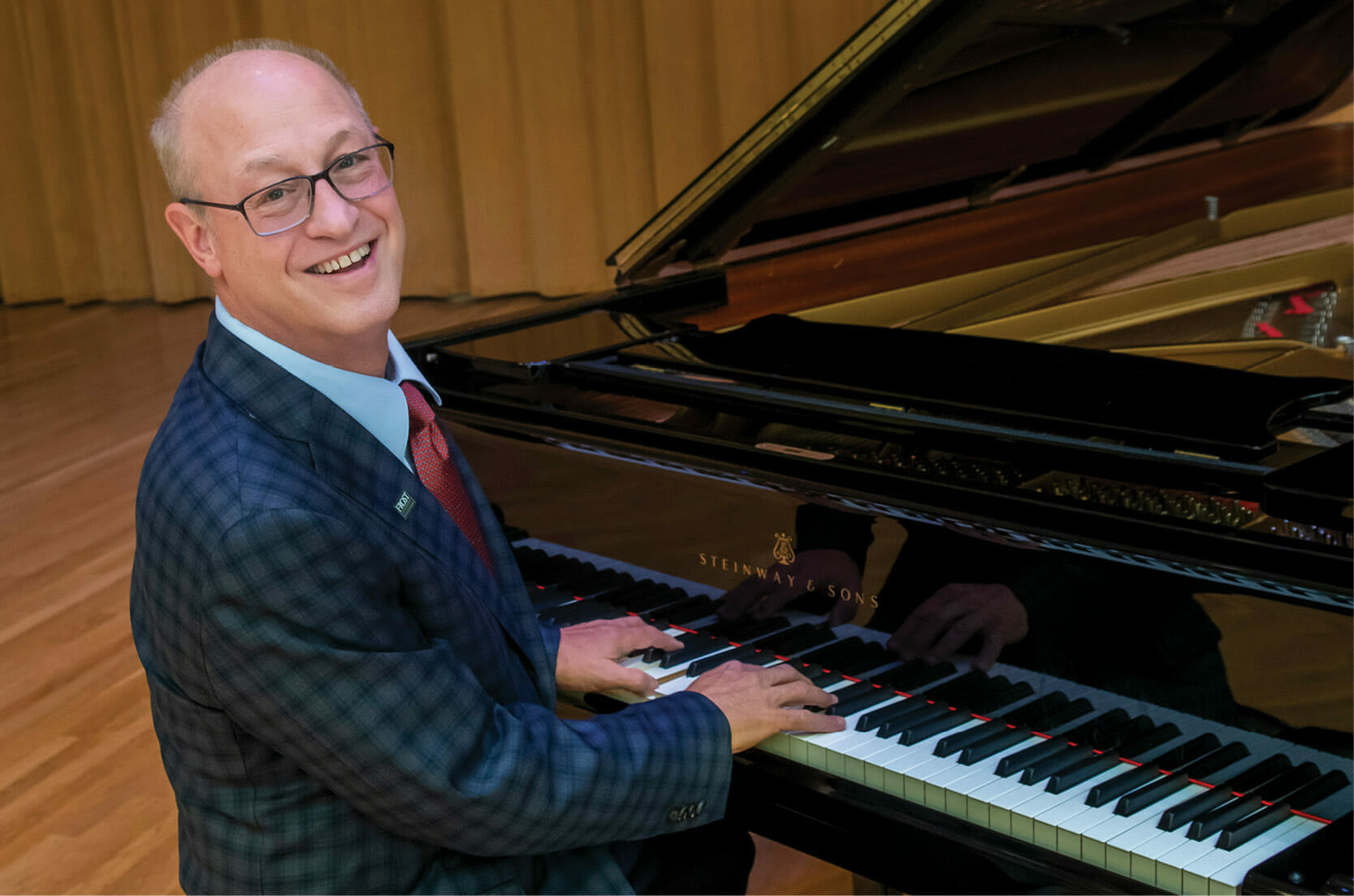 Photo courtesy of the Frost School of Music

For the past several decades, he has collaborated with the biggest stars. Now, he mentors the musicians of tomorrow.

Shelton “Shelly” Berg is Dean of the University of Miami’s Frost School of Music, but that title merely scratches the surface of his talents and passions. A lifelong musician who is a Steinway pianist and jazz aficionado, he talked with OutClique about how music is returning to a sense of normalcy and his big plans for 2022 and beyond.

First up is the holiday season and concerts.

“Every year we do a holiday gala with 200 singers and instrumentalists called Winter Wonderfall, and that’s on the marquee in downtown Miami. We also have a big band concert called Swinging’ with the Holidays, and that will be fun. All big band holiday music.”

Berg is also very excited about a show mixing music with other artistic expressions.

“December 4, 2021, our conductor will perform at the Arsht Center after Art Basel. This is a really interesting concert and we’ve commissioned new works of art that will be projected in HD while we’re doing the music. It’s very multicultural and will get people to think about the music in light of events in the world.”

The concert will touch on themes that are, culturally, front and center.

While Berg has a broad knowledge of music across genres and instruments, he has his favorite style: jazz. He has a deep love for Gold Coast Jazz Society and is the leader of the Shelly Berg Trio.

“I have been performing with them ever since I moved to Miami in 2007. I now do an annual concert. This will be the first one with just the trio, not backing up another artist.”

He also says Gold Coast has given him opportunities to work with some of the most influential people in music. A five-time Grammy nominee, Berg’s collaborations include work with Gloria Estefan, Seal, and Arturo Sandoval.

“Jazz for me has an expanded palette. It incorporates classical, pop, South American, Brazilian, Afro-Cuban – it has always been this melting pot. This gumbo in which you get to create at a level that requires all of your soul and all of your intellect. I think music has been and is an influential voice in culture. The difference now is that our other cultures outside of music are having such a difficult time.”

Known as one of the best pianists tickling the ivories in 2021, Berg became a Steinway pianist after developing a bond with their style and their hand-crafted appeal.

“Steinways have a humanity to them, because they’re made by so many humans compared to machines. I find that I can feel that in a piano. I can feel it. No two Steinways are exactly the same, but they are all great.”

The choice finally came as an ‘oh yeah’ moment, after trying out a lot of versions.

“Yamaha makes a wonderful piano too. For years I was trying to decide which to go with. My wife finally said, ‘What do you want to see when you step out on stage?’ I said, ‘Oh!, Steinway.’ I’ve been a classical musician all my life. I’ve worked with a lot of rock musicians from KISS to Steve Miller to Carole King to Chicago.”

Berg told us and hinted at another big project already in the works.

“I have at least one new recording coming up in the new year. I am working with a very big rock star, who shall not be named now, but will be involving classical musicians and rock.”

Other plans have him taking his talents on tour.

“The Frost School has taken over the Classical Music program and festival in Napa Valley. There’s an academy in Aspen. I perform with both of those, which is great because I am with students and peer musicians from around the world. It’s the synergy of my performing and advancing those schools.”

As Dean of the Frost School of Music, Berg is getting a first look at the music stars of tomorrow. Part of his job is to nurture the talent, and he says one of the best parts of the job is getting a glimpse of the raw potential.

“When I see in a sea of students, one who is driven to be great, and has that transcendent ability to move you, something special is going to happen. The key is to get them to strengthen their weaknesses and grow into full, well-rounded musicians. For a student, they also have to work very hard on the things they’re not good at and get better at them. It’s easy to work on the things you’re talented about. They have to be driven to be great.”

Premature delusions of grandeur must also be kept in check.

“You can let them know you think they have something to offer and you want to help them get to that. You don’t want them to think they’ve made it too soon, because they haven’t.”

Berg says those special talents have the potential to be truly great.

“It’s a couple of things. It’s always a highlight to work with Stevie Wonder or James Taylor. They sing one note and you’re already feeling a change. Something is happening to you that’s indescribable. There are a lot of great musicians, but there are a few that can change your world in a note. They have that ability.”

He also sees music as a unifying force in a time of endless division.

“In a time when there is almost a void of people knowing how to unify, come together, and talk to each other, music makes a safe space for that. Even though musicians have always done that, it is more important now. I don’t want to use my music to divide. I don’t want to tell someone they’re doing it wrong. I just want to try to say here is what I think is right. Here are the things we agree on, and everybody’s invited.”

As excited as Berg is for his students and his trio, he is most excited for the resurgence of the arts community in general.

“I’m glad that music is leading the way back to a more normal life again, and I couldn’t be happier than going back to concert halls and being with people who love music again.”