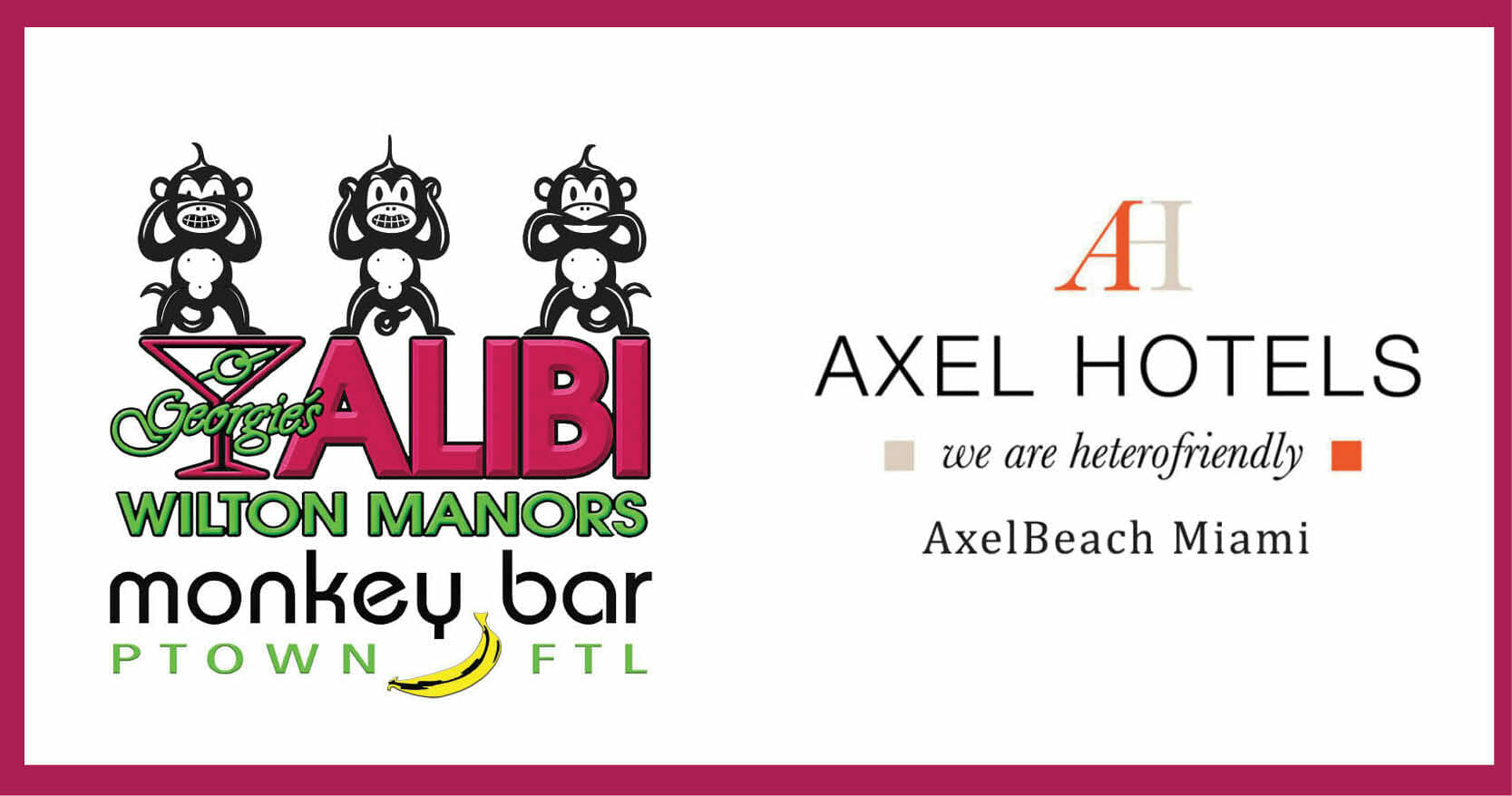 Wilton Manors’ first gay bar will operate all food and beverage operations within the AxelBeach Miami Hotel along with exciting community events and premier parties.

Georgie’s Alibi Monkey Bar (Alibi) announced their partnership with AxelBeach Miami Hotel to operate all food and beverage operations within the hotel, which  began in March 2021. Alibi was the founding establishment in South Florida’s popular LGBTQ+ community of Wilton Manors in Broward County, Florida. Alibi has operated in Wilton Manors for 24 years. Alibi also has a sister outlet, The Monkey Bar, in Provincetown, Massachusetts (P-Town) which has been in continuous operation for 28 years. Both establishments represent a long term dedication to the LGBTQ+ community.

Alibi has been a staple of the Wilton Manors social scene since its opening and has hosted countless community events and philanthropic fund raisers, plus direct donation to benefit and support the LGBTQ+ community. The Monkey Bar in P-Town has offered LGBTQ+ travelers quality food and drinks for decades. The Axel Hotel’s brand invited Alibi to copartner with them at their Miami Beach location. Both will surely create an exceptional experience that will bring guests back again and again.

Axel Hotel opened in Barcelona, Spain over 15 years ago and in 2019 opened its first U.S. LGBTQ+ hotel, AxelBeach Hotel, at 1500 Collins Ave in Miami Beach. Axel Hotels has outlets in several European destination cities including Barcelona, Berlin, Madrid, Ibiza, and Maspalomas with additional LGBTQ+ hotels coming to locations in Spain, Portugal, and Cuba. AxelBeach Hotel is nestled directly in the center of the Art Deco district and is a short walk to sizzling Miami Beach and neighboring LGBTQ+ businesses and attractions. It has 160 rooms, a large sparkling pool, onsite restaurant and lobby bar, plus the beautiful SkyBar for larger hotel events.

AxelBeach was only open a short time before the pandemic put all of our travel plans on hold in 2020. Beginning new again in 2021, the hotel is fully open and ready for guests to fill its rooms and experience Miami Beach and other local attractions throughout all of South Florida.

Alibi began operating and staffing all the food and beverage outlets at AxelBeach Hotel in March 2021. This will be integrated into the arrival experience and throughout each guest’s stay at the hotel. Alibi will develop and provide entertainment focused on the LGBTQ+ traveler and support local community events. Going forward, Alibi and AxelBeach Miami will refer to their partnership endeavor with Axel Hotels brand as “Alibi at AxelBeach.” This partnership hopes to be able to meet and greet new and old friends again as we all begin to return to our lives as sophisticated travelers and tourists both from the U.S and abroad.

On behalf of AxelBeach Hotel and Alibi at AxelBeach, “Welcome to Miami! Get ready for an experience of a lifetime!”

For more information on employment, bookings, events, or just to say “Hi,” direct all inquiries to AlibiAxelBeach@gmail.com. Content courtesy of Alibi.