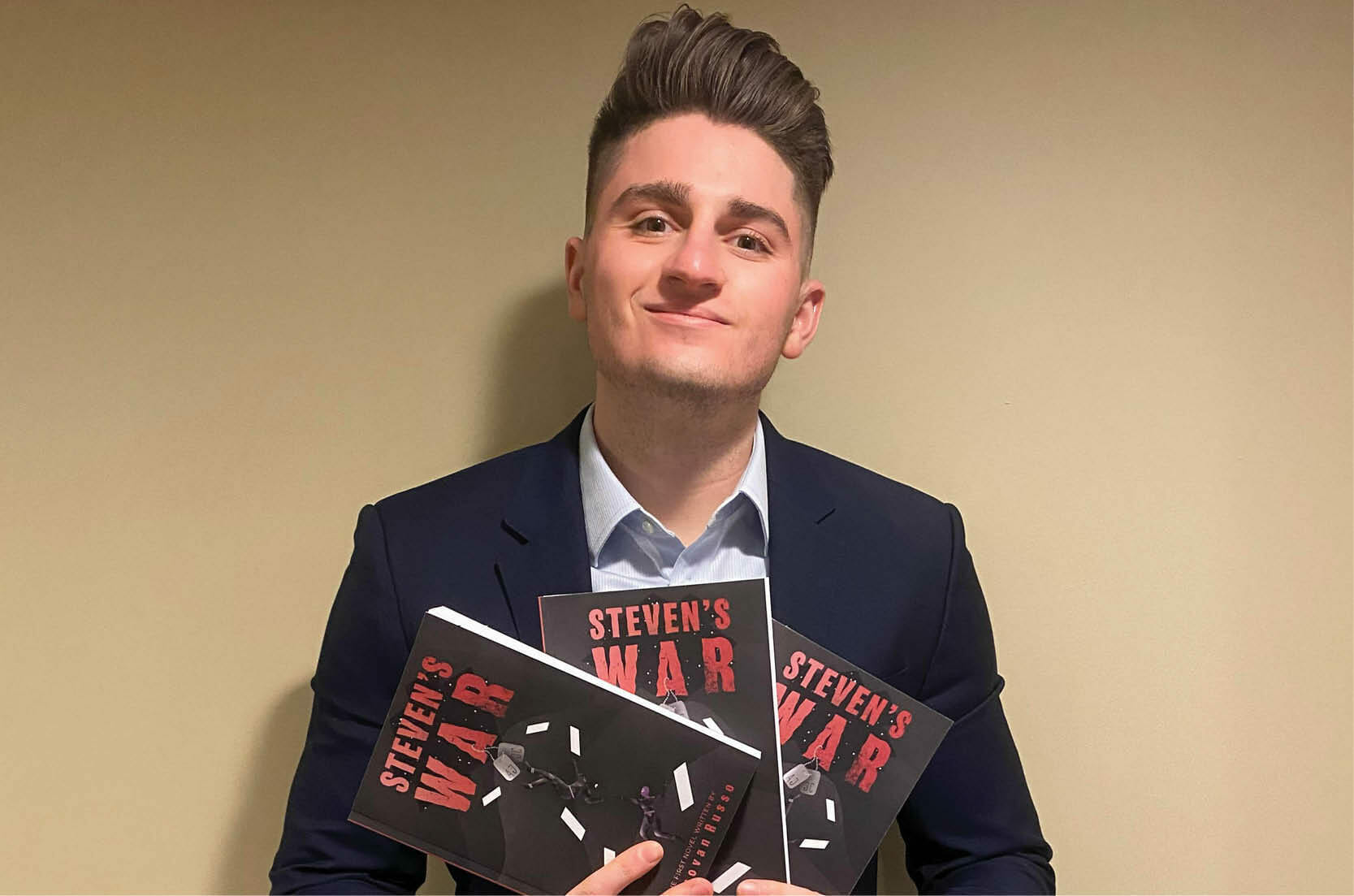 A highly entertaining and gripping story, Steven’s War tells the story of Steven Cahill, a closeted Marine serving in Afghanistan during the “Don’t Ask, Don’t Tell” period of the military. After enduring a devastating loss on the battlefield, Steven is sent back home to the crime-ridden Salem City. When Steven’s world further crumbles, he embarks on a vengeful quest to take down the man responsible for Salem’s corruption.

The novel is a dark thriller which smartly and uniquely weaves in LGBTQ themes. In fact, Russo opens with a Harvey Milk quote: “Hope is being able to see that there is light despite all of the darkness.”

Russo took some time to chat more about the book with OutClique.

Denny Patterson: Hi, Donovan! Thank you for taking some time to chat with me about your book, Steven’s War. How exciting is it to publish your debut novel?
Donovan Russo: Thanks so much for your time and consideration, Denny! Publishing my novel and holding the book in my hand for the first time was such a crazy experience. It felt satisfying, special, and as if this long and tiring process has finally come to fruition.

DP: Can you tell us what inspired you to write Steven’s War?
DR: I have been a fan of the comic book genre since I was five years old. I am 24 now. So, the Marvel and DC movies, shows, and literary works have inspired me greatly in my life. Therefore, and because I like to write, I was looking for an opportunity to kind of put my own spin on the genre. In regards to why I wanted to write this character as a member of the LGBTQ community, there are a couple reasons. First, because I am an MBA candidate, I always try to look at things in terms of the marketplace. With that being said, there are not a lot of LGBTQ superheroes that I am familiar with. I saw this as a chance to create a product that would be different. Second, and from a creative standpoint, I thought that making my protagonist gay would add more to his characterization, as I could then dive deeper into the internal conflicts that he is struggling with. Lastly, although there are LGBTQ superheroes out there for fans, I think we can both agree that more representation is needed. Hence, I wanted to do my part in creating a character that an underrepresented group could resonate with.

DP: There are not too many books that focus on the controversial “Don’t Ask, Don’t Tell” policy. Why did you want to include this?

DR: I learned about this policy while conducting my research, and I was honestly heartbroken over it. Overall, I thought that utilizing it would add a sense of realness to the story, especially in those early chapters that are set in the Middle East. Although “Don’t Ask, Don’t Tell” is no longer a rule, I still think its impact is present in today’s world. Especially when it comes to environments that still ooze with toxic masculinity and heteronormativity.

DP: What was the most surprising fact about “Don’t Ask, Don’t Tell” you discovered while doing your research?

DR: Just the shock that there was so much homophobia in the military in recent history. The policy was changed in the early 2010s, right? That is just mind blowing to me. If you want to serve our country, your sexual orientation should not matter.

DP: How has Steven’s War been received by readers?
DR: It is an indie book, so there obviously has not been huge sales numbers or reviews. However, the people who have read it, they have honestly said really nice things about it. Most notably, people have said that they are surprised over how well written it is. I mean, I guess that is a compliment, right?

DP: What do you hope they take away from the book?
DR: There are a few goals or ideas that I want consumers to take away from this book. First, although it has been marketed as a superhero narrative, I think anyone who enjoys character driven stories could appreciate it. Second, you do not have to be a member of the LGBTQ community to enjoy it, as there is something in this novel for everyone. Lastly, I did not have a political agenda while writing this. Yes, there is a critique of homophobia in it, but the heart of the book largely focuses on this messed up guy who is just trying to figure out his life. I think we all could relate to that.

DP: Although we are progressing when it comes to LGBTQ representation, do you think those kinds of characters and themes are still largely missing from superhero and vigilante books?
DR: I am not criticizing any other writer or company because a lot of what exists has already greatly inspired me. However, I will say that a lot of progress is being made and we are seeing more and more LGBTQ stories within the marketplace. I think stories are only going to get more diverse!

DP: How do you see yourself in Steven?
DR: Steven Cahill has a lot of anxiety like I do. He is also fascinated about others, the meaning of his life, and the relationships he has made in similar ways that I have. By all means, Steven Cahill and Donovan Russo are two different characters at the end of the day, and perhaps that is the key. We all see ourselves in the characters that we consume, but it is important to realize that we are not the characters that we write, play, or interact with. We are our own individuals, and that is okay!

DP: Have you always had a passion for writing?
DR: Yes! I have written for CNBC and Yahoo Finance, a bunch of screenplays, songs, short stories, and I have interned on the literary development side of the entertainment industry providing notes and coverage on projects that were in the works.

DP: What were some of your favorite comic books and vigilante stories growing up?
DR: I really loved the Dark Knight trilogy by Christopher Nolan. Truly, I think those movies, specifically The Dark Knight and The Dark Knight Rises are masterpieces. I also love what Disney and Marvel Studios have done as well. My top five Marvel Cinematic Universe movies are Endgame, Infinity War, Civil War, the first Avengers, and the first Iron Man. I also have to give a shout out to the Sam Raimi Spider-Man movies. Those literally opened up the world to me.

DP: While promoting Steven’s War, you spoke a lot about heteronormativity and toxic masculinity. Why do you think these are still such troubling issues?
DR: I think we are still very much in a transition phase, in regards to the development of our society. There are still a lot of folks out there who do not want to embrace different ideas or communities. There are a lot of people out there who prefer the “old fashion” ways of the world. I think we can make an argument that it is easier to live in 2021 than it was to live in 1991, and that it was easier to live in 1991 than it was to live in 1981, and so on. I think that things will only get easier and more accepting. Overall, it just comes down to more people being educated and exposed to the modern world. Doing their part to make it a better place.

DP: Can we expect a sequel to Steven’s War?

DR: I have ideas, but it is not my focus at the moment.

DP: What have you learned about yourself throughout the writing process?

DR: For one, I learned just how relaxed and at peace the writing process makes me feel. I wrote a good chunk of this book during the height of the pandemic, so it really got me through some tough times. In a weird way, it was kind of like Steven Cahill and I were there for each other. It is interesting to look back on the story and character now that it has been a few months. I would say though, that the biggest lesson for any writer out there, if you actually want to take advice from me [laughs], is that the true story that you want to tell will unfold in the editing process. Do not discredit the value of editing your work and reading it until it makes you blue in the face. It will allow you to dig deeper into the characters, plot, and language.

DP: Outside of writing, you are overseeing the launch of an inaugural film festival with the NJ LGBT Chamber of Commerce. Can you tell us more about that?

DR:  Of course. I appreciate you asking about that. It started out as an MBA service project for school, where I wanted to find a way to blur the lines between what interests me and what my MBA program requires. As a result, I pitched the idea of a film contest to the NJ LGBT Chamber of Commerce, and we have been able to get some really awesome judges and organizations involved. Most notably, GLAAD is helping us out with it and some of our judges have worked as executives for ViacomCBS, NBCU, and one is a Hollywood Script Consultant that has worked on huge movies. We are still figuring out some of the logistics, but are really excited about where it is heading. I should also add that the goal of this festival is to provide a free platform for LGBTQ cinema and artists, celebrating their work.

DP: Before we wrap up, are there any upcoming books in the works, or anything else you would like to mention or plug?

DR: I just want to say thank you so much for your time and consideration! I am sure there are dozens of more interesting people to talk to instead of me!