Jason Shervinski is the first in our series. He started the South Florida chapter of the Varsity Gay League. Now in its third season of dodgeball and kickball, Varsity Gay League has enjoyed rapid growth with over 150 participants and growing. Jason endured significant challenges growing up gay, but has transformed himself into a man who builds community and connections within our community. In fact, he frequently talks about the importance of having community, a support network, and how gay sports is a wonderful way to make new friends, build community, and strengthen our collective self-esteem. Jason lives in Wilton Manors with his partner of five years, Michael Toumayan.

From a small town traumatic outing to discovering a sense of belonging and community in young adulthood.

I am 34 years old, so I grew up in the 90’s in a little town in PA called Shamokin. The town had a population of only 9,000 and my graduating class consisted of 143 students. And, everybody knew everybody. In the summer before 10th grade, I came out to an ex-girlfriend. She had told me a personal story about her life over summer and I shared something personal about myself. When I got to school the first day, everyone knew. Everyone looked at me differently. I was called names. I guess it was the typical 90’s, “I came out in high school” story. It was tough on me. I tried to throw myself in to activities. I tried the AV club and I tried sports. I joined cross country track and swimming. But I felt like it never worked because it was awkward being in the locker room with guys thinking I was looking at them, which I wasn’t.

I moved out at 18 and went to college in Bloomsburg, PA. That’s where I really found my voice. My freshman year I joined a fraternity called Delta Kappa Epsilon. At the time, I thought I was bisexual and prior to getting my bid, I reached out to a brother and I told him. I let him know if the fraternity is going to accept me, they need to accept me for all of me. It was never an issue for them and I got my bid the next day. I am a brother of a wonderful fraternity that’s lasted a lifetime. I am still friends with my brothers to this day. We keep in touch. We look out for each other. This experience with the fraternity was what I was looking for: the sense of community. This experience really set me on my way for my life.

I left college early and moved to Philadelphia and that is where I found my first real LGBT community. I was 20 years old doing all those things people in their 20’s often do, running around to bars and that’s where I first found our community. When you walked through the door of the club, it didn’t matter if you were transgender, gay, straight, whatever, you were accepted. That was a tough time socially. It was before gay marriage and we were still fighting for some basic rights, so being accepted was so important to me.

In 2008, the market turned and I decided to move to DC, because of the federal jobs that weren’t affected. In DC, I found Stonewall Sports. It was their second season of kickball so I still consider myself a founding member. Kickball was Stonewall Sports’ first sport and Washington was their first city. Stonewall was life changing for me. It brought so much fun into my life and it brought me back to sports. And I made some of my best friends to this day playing kickball in DC.

Over the years, I have been going to this tournament called Sin City Showdown. There are 18 different sports from softball to swimming to bridge. We started going six years ago. My role has evolved from player to city leader to division leader for the kickball tournament. I like the national tournaments because they offer something our local kickball does not.

When you go to the national tournaments, you get to meet even more like-minded individuals and build social connections all over the country. The tournament hosts about 72 teams from around 50 cities. So now when I think of community, it’s not just the bubble here in South Florida, its national, and very large and meaningful. 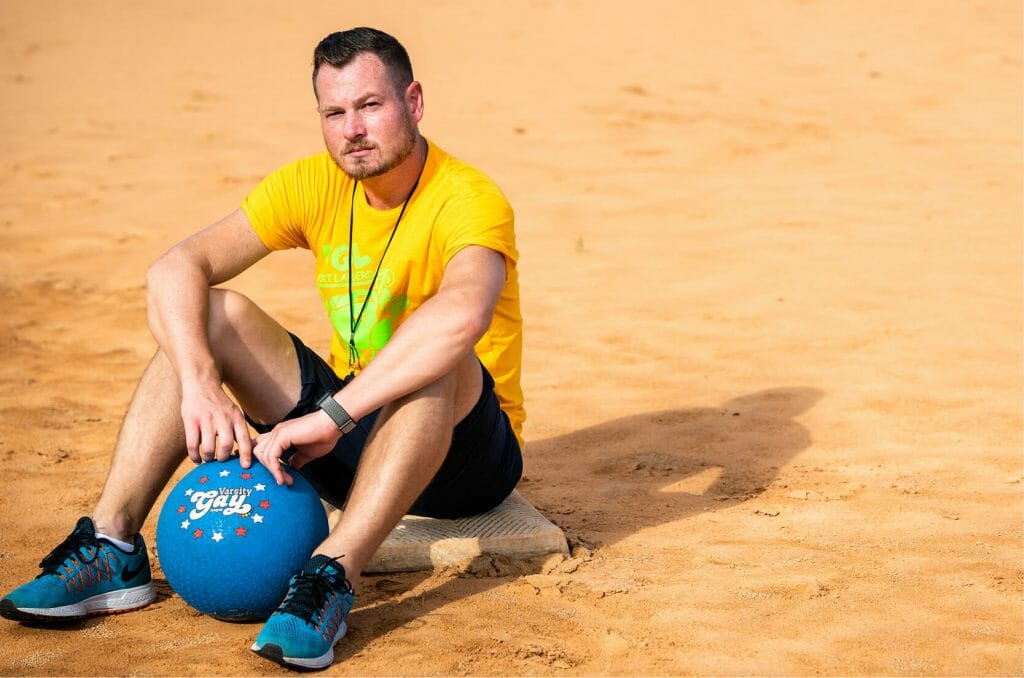 Starting the league and building the community in Fort Lauderdale

My partner and I moved to South Florida in May 2017 and knew no one. What made it easier for me in the beginning to find my way was the sporting activities. Since there were not any kickball or dodgeball teams here, I reached out to my friend, Will Hackner, who is the head of the local Varsity Gay League and I started the leagues here. I created this not just because I wanted to play, but because I was alone and I knew we could meet so many great people. That’s why it was created. So if you are new or if you simply feel alone, there is place where you can come. You don’t have to have sports ability. You will always still be accepted. All you have to do is show up. I try to talk to every player and let them know I am here for them.

It’s a lot of work, but its rewarding. At this point we are four seasons into kickball and we have over 150 players but we are seeing 15-20% growth each season.

I was sweating bullets when I started it. I wanted it to succeed. For the very first season, it was slow getting the word out and getting players signed up. But it all came together and we have grown from 79 players to over 150. The first season started with five teams. The first season had a few issues, but once those were worked out, it really came together.

It’s been a learning curve to work with so many personalities. Whenever you have a lot of people together, you have to set ground rules. My two most basic ground rules are, one if you come to the field intoxicated, you’re not playing. And two, if you bully, you are out of the league. There is a no tolerance policy for bullying and it’s grounds for termination. We have all been bullied in the past, so we should lift each other up, not tear each other down.

On the transformation from the person who was hurt and betrayed as a kid, to becoming the adult who does so much that is so positive for so many people

I am not going to deny that there weren’t dark days when that all happened back in high school. I was the center of attention for all the wrong reasons. There were suicide attempts. I felt alone. There was nobody to fall back on and no gay community. So, I was on my own, but it made me a stronger person. The trials and tribulations made me realize that having a sense of community and a safety net is huge and makes the biggest difference.

The league is very inclusive of all sexual orientations and gender identities. The average age for the league is 45. Next season, my goal is to prioritize outreach to the transgender community. It’s imperative that we not only support our transgender siblings, but also create a sense of belonging and community through sports.

Although I am the General Manager of the league and I identify as a white cisgender gay man, it’s important for me that the leadership reflects the richness and racial diversity of our league members. That’s why we have two league managers, Kenneth Guerrero and Harley Garza, who are both Latinx.

I support the local businesses in our community and our sponsors who have made this all possible.

Holiday Shopping Tips from the BBB

The “Most” Wonderful Time Of the Year