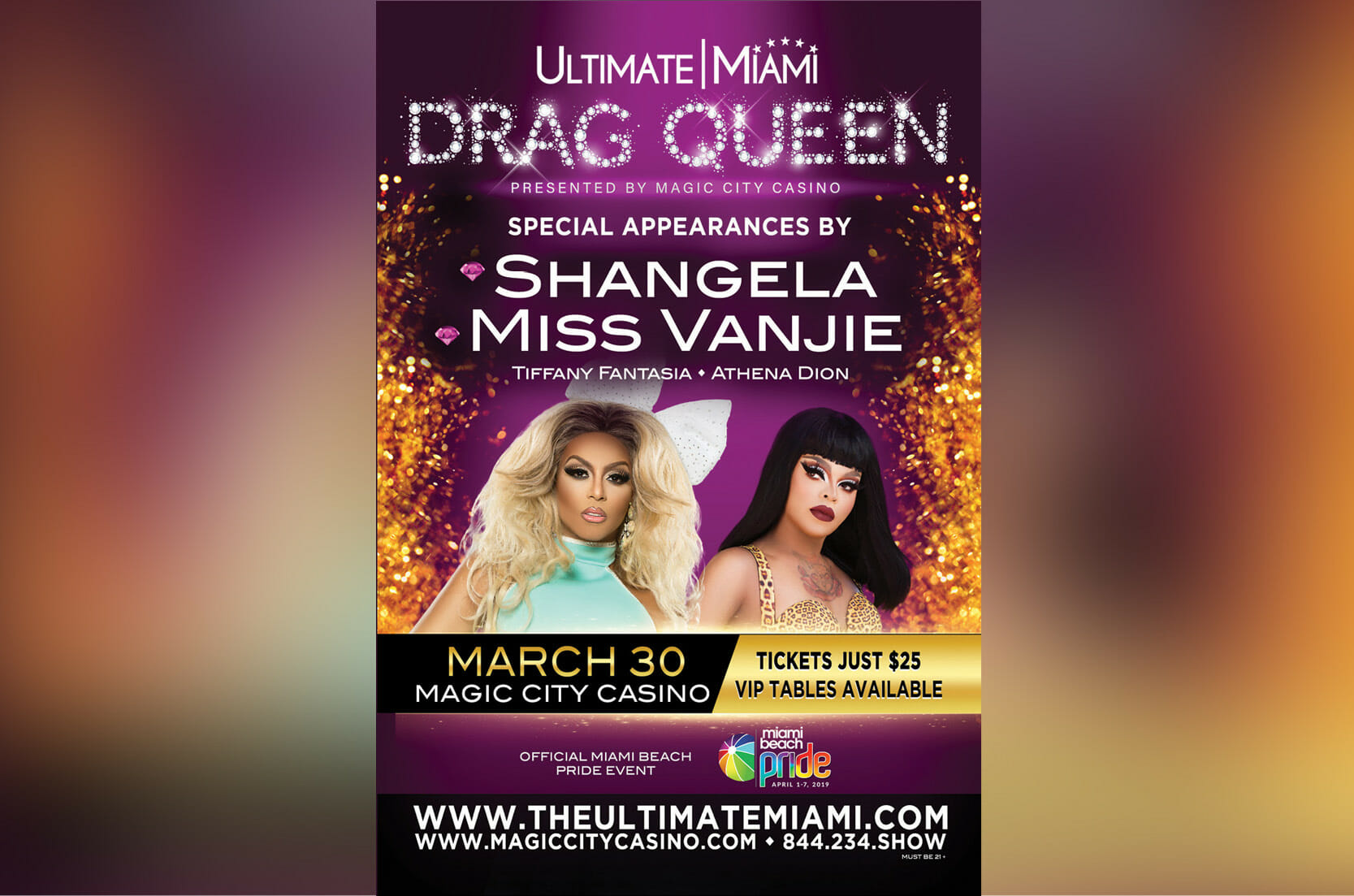 It’s Shan-gel-la, say what? Started as a baby, but she’s all grown up – and she’s headlining this year’s annual Magic City Casino Ultimate Miami Drag Competition alongside Drag Race’s favorite first eliminated queen, Miss Vanjie. On Saturday, March 30, 2019 South Florida’s fiercest drag performers and female impersonators are going to bring their charisma, uniqueness, nerve, and talent, while competing for a cash prize of $5,000 and the title of the Ultimate Miami Drag Queen in a pageant style setting. The queens will be scored in three categories: talent, signature look, and Q&A. Get ready to sashay and shantay, because this is a night of shameless fun and everyone is guaranteed to have a good time. Who wouldn’t want to hang out with Shangela and Miss Vanjie? I had the pleasure of chatting more with Shangela about the upcoming event, in addition to her current and upcoming projects and her overall love for drag and performing.

Welcome to South Florida! You are headlining the Ultimate Miami Drag Competition. That must be pretty exciting for you.

Oh my gosh, it is thoroughly exciting because, you know, I am a diva who has been a part of a couple competitions in my life, and I always celebrate those who put themselves on the line to go after what they want. Their dreams. That is something I do on the daily. It’s really cool.

As a headliner, what can we expect from you?

Fabulous. Now, are you familiar with the Miami drag scene?

I am. A lot of the girls down there I have always admired. You know, I’m from the south, from Texas. I think Florida has some of the best drag entertainers in the business.

What do you hope these Miami competitors bring to the competition?

you step on stage, you have to be and present your best.

You are going to be headlining with the fabulous Miss Vanjie. Have you two worked together before or will this be the first time?

Honey, this is a Miss Vanjie and Miss Shangie collaboration! [Laughs]. No, this is not my first time working with Miss Vanjie. She is actually like my drag niece because Alexis and I are really close sisters from season three of Drag Race, so she calls me auntie. Auntie! And I admire her a lot because like me, she was one of the RuPaul’s Drag Race contestants to be voted off first in her season, and that’s what happened to me in season two. But we both worked our way up and onward. I am excited, and we are both comeback girls. I came back on season three and All Stars 3, and she’s coming back on season 11. So, we have a lot in common. We both love a good show and I think both of us, more than RuPaul’s Drag Race contestants and drag queens, we are also fans of drag. So, I am excited for us to get back together again for this show.

What are you looking forward to the most about this event?

Ooooh, the Miami sunshine! [Laughs]. I am looking forward to these queens. You know, any time it’s a battle or any time it’s a competition, you know you are going to be entertained. Somebody is coming for blood, and I can’t wait to see it!

I am sure it’s going to be quite a show! Let’s talk about Drag Race for a second. What were your thoughts about this most recent season of All Stars?

Oh, well, when am I getting the call to return? I was like, none of those divas are going to show up in a box! But like I said, I am a fan of the show first. I watch every episode and wait for it weekly because I love seeing drag on television like that.

So, if you were asked to compete on another season, you would?

First of all, you never know where or when Shangela is going to pop back up! There is always a chance, but right now, my focus is really on trying to create new things and new opportunities for myself and continue to evolve as a drag entertainer and an overall entertainer. I am hoping to continue to work in television and film after the success of A Star Is Born and touring last year to 184 cities around the world. I am very happy now to hopefully mentor other queens and provide opportunities not only for myself, but for them too. So, I think that is where my focus is right now.

And what do you think about the season 11 queens? I am assuming you are pulling for your drag sister, Plastique Tiara?

Oh, Plastique? Yes, I love her! You know, there are so many different types of drag represented on this season which is really cool to me. So, I am not putting all my money on one diva just yet. I am excited to see it and there are people who stand out to me, like Brooklyn Heights who I’ve known from Texas and the pageant scene. I am excited to see her, and I am excited to see Plastique. She is beautiful and gorgeous and has so many beautiful things to bring to the competition. I love Silky Ganache, that diva. I love me a big girl, honey who knows how to bring it. She looks like she is definitely that girl. In addition, I love Vanjie who brings such great excitement on stage and it is such good television. So, it is really exciting to see this new crop.

How have things been going with you otherwise? Any upcoming projects we should be on the lookout for?

Well, you know, I just be sitting on my hands doing nothing [laughs]. Of course! You know, I am excited. Last year, I finished touring to 184 cities around the world which is the largest single queen Drag Race tour of any queen from the herstory of Drag Race. So, after that, I was excited to come back home to LA and focus on projects here. My dream has always been to work not just as an entertainer, but also as an actor. After the success of A Star Is Born, I am looking to secure more roles in television and film.

Are you at all participating in The Haters Roast: The Shady Tour?

No, I’ve had enough shady experiences in my life. You saw All Stars 3! I’m good! You know, I’m working on some comedy projects right now. I just finished my Shangela is Shook comedy show and that was the third comedy cabaret I have written, so I am working on a new one right now and just really putting my efforts into television and film.

Lastly, what would you like to say to your South Florida fans?

I would like to say, get your tickets now, come out, and let’s have the best time ever. You never know when mama is gonna sit down and take a break. South Florida, come kick with your girl. Halleloo!