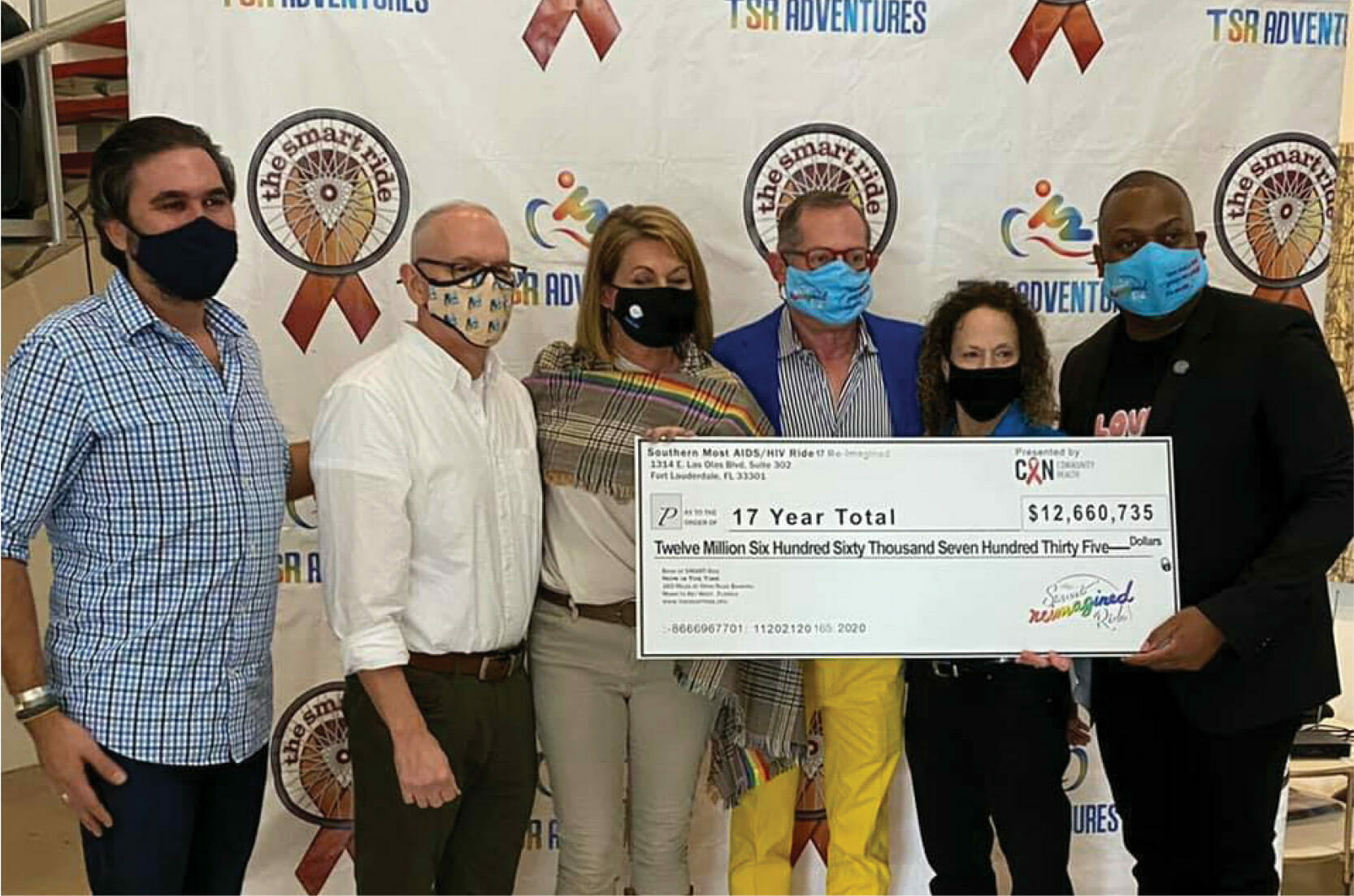 Photo courtesy of The SMART

The SMART Ride 17 happened and it looked different, according to founder Glen Weinzimer. “We had to reimagine everything; the need to provide the agencies we benefit and ultimately the individuals needing services remained great. NOT doing an event was out of the question.”

Traditionally, The SMART Ride (Southern Most AIDS/HIV Ride) is a two-day, 165 miles bicycle ride from the University of Miami to Key West. In a normal year we would have seen over 250 individuals supporting the efforts of the over 500 cyclists as they travel south to Key West. In 2019, this event, which guarantees that 100% of the funds raised by its participants goes to the benefiting agencies, raised over $1.4 million.

This year, with the help of riders and volunteers, the ride was reimagined and individuals were encouraged to ride in their own backyards, to do their metric of 1-6-5 in whatever form that took. “We had participants fly in from California and ride their usual 165 miles, as well some participants chose to do stationary biking because of COVID-19, and others spent the weekend cleaning the beach for 165 minutes. They even had one person paddle board for 16.5 miles over the weekend,” added Weinzimer. The SMART Ride is the largest HIV/AIDS ride in the eastern United States and second largest in the country.

Aiming to raise $500,000 in 2020 due to the economic impact of COVID-19, the event exceeded its goal by raising over $700,000 to support six HIV/AIDS organizations throughout Florida. The SMART Ride has now given back over $12 million dollars to support programs and services for people living with or affected by HIV/AIDS throughout its 17-year history. The SMART Ride is the only HIV/AIDS ride in the country that gives back 100% of all the funds raised.

On Sunday, January 17, 2021, the event organizers hosted a virtual Check Presentation Ceremony. Instead of the usual 300 people that attend this festive event there were only 14 people and everyone was super vigilant about safety. All donning their masks, keeping social distance, and broadcasting through social media the amounts raised and distributed.

The SMART Ride 18 will take place on November 18–20, 2021, and organizers believe that the vaccine distribution will allow for a safe in-person ride. “We anticipate selling out early this year because of the unprecedented demand,” Weinzimer said. “We believe this will be a record breaking year.” The ride is so important to so many in our communities throughout Florida where we currently have the highest rate of new HIV infection in the United States.

Direct beneficiaries of this years and next are:

If you are looking to register to ride, crew, or volunteer please visit The SMART Ride website at www.TheSMARTRide.org. If you would like to become a sponsor or become more involved contact the organizers directly from the website.

About TSR Adventures & The SMART Ride

TSR Adventures, Inc., dba “The SMART Ride,” is a 501(c)3 not-for-profit organization. TSR Adventures, Inc. is committed through the combination of individual contributions and public/private partnerships to creating, producing, and/or overseeing community based events in which 100% of what the participant raises is returned to benefiting non-profit organizations. In so doing, the organization acts as an avenue for change in the non-profit fundraising community. Content and images courtesy of The SMART Ride.