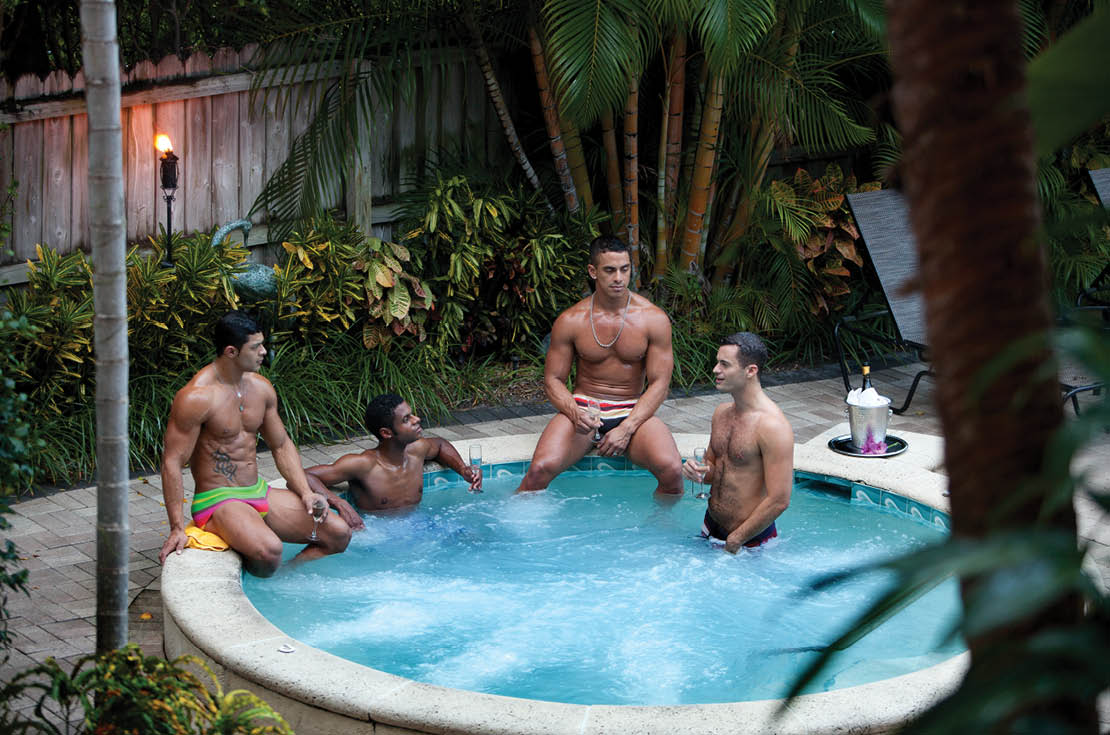 Photo Courtesy of the Grand Resort and Spa

Zielke, the marketing and operations manager for The Grand Resort and Spa, had an “in” with the show and was able to negotiate a promotion spot during season nine.

The Grand Resort was featured for just seconds as a prize for one of the contestants, but it was enough to attract new clientele and bring some additional drag queen energy to the 33-room development.

Zielke has more than a decade of marketing and public relations experience, including the past seven years at the resort.

“I was making a sudden move to Ft. Lauderdale in 2010. The markets were going crazy and there were layoffs. And I was ending a relationship,” said Zielke, who is admittedly very open about his life.

So he made the move from New Jersey and says the job kind of fell into his lap after finding a part time job in housekeeping at a small boutique hotel not far from the Grand Resort, which is located at 539 North Birch Road, close to the well known (especially among gay men) Sebastian Street Beach.

Zielke said Grand Resort owner Casey Karl Koslowski heard about his background and needed someone to come in and manage the property. He’s been there since 2007. Koslowski has owned the resort since 2001. It opened in 1999 and will celebrate its 20th anniversary next year.

“I was very nervous because this was something new to me, but I quickly picked it up,” said Zielke, who added that his years in theater, going on national tours, doing off-Broadway shows and performing in dinner theater also helped him acclimate.

“I have a good work discipline and a good rapport with other departments. And I was involved with LGBT and Pride organizations,” he said.

The Spa at the Grand Resort

One of those “other departments” is really more an integral part of the operation — The Spa at the Grand Resort. Co-owned and managed by J.D. Greene, the spa is one of the ways the resort differentiates itself from other options for gay men in the area.

The options and amenities are dizzying. Greene oversees services such as massages, facials, scrubs, waxing, manscaping, hair, manicures and pedicures. Services come in several different options including day spa packages and monthly spa memberships. Options such as a mustache and goatee trimming start at $10 and continue through a five-hour “Day of Indulgence” package for $509. (Prices subject to change)

The resort and spa’s typical demographic is a man aged 35 and up (you must be 21 years old to be on the property due to beer and wine sales). To be sure, there are many visitors from out-of-town, especially during high season (mid-December through March), but locals come too, as the resort partners in many local events such as FlockFest, Stonewall Pride, and Bearsurrection.

Zielke says guests are a mix of singles and couples and a wide variety of ethnicities come for a stay. “Each gay resort is a little different and has their own niche,” said Zielke.

While the property is all male, if a female wanted to go to the spa for a treatment, that is more than acceptable, said Zielke. There are essentially two sections to the property — front and back. The back is clothing optional, something that was voted on by guests. “It’s for those appreciative of bodies and who are comfortable in their own skin. There is always the element of respect in that area,” Zielke said. “We are sensitive to everyone’s needs.”

The Resort is now entering mid-season, where rates go down a little and reservation options become a bit more available.

In April and May (and again from October to mid-December) rates run from $149 for a courtyard guest room, to $569 for the two bedroom/two bathroom grand penthouse.

Zielke, who is one of about 25 employees at the resort, said he’s already secured another sponsorship on season 10 of RuPaul’s Drag Race. He said it’s a natural fit for the resort, in part because performers and drag queens connected to the show have stayed at the property. He said he’s also booked international drag queens for a stay.

“We welcome a variety of ages 21 and up, providing a vacation experience that is diverse in age and background,” said owner Koslowski. “Additionally, as people travel more and more with their furry friends, we also sell out our block of pet-friendly suites with their private patios well in advance as they are in high demand now.”

While the property was originally an apartment complex, it’s clear Koslowski has had work done over the years. “We have had several remodels and upgrades to the rooms, reception areas, property grounds, and offices to accommodate the ever-changing needs of our guests,” Koslowski said.

Koslowski says he takes pride in a lot of “firsts” that the resort has offered guests, such as being the first gay resort on the beach to offer complimentary Wi-Fi. But he says, it’s the spa that was really a shot in the arm.

“The most important evolution was when we opened the first full-service spa, catering primarily to gay men on the beach well over 10 years ago. Around that time, we also became the first gay resort to have a front desk that was both open and operational 24 hours, to best ensure around the clock security and service to our cherished clientele,” said Koslowski.

While the RuPaul Drag Race promotion has tapped into some slightly younger clientele, Koslowski said the target market has primarily been affluent men, “who appreciate stellar service and luxury spas, but also those who take advantage of the series of discounts that we offer.”

In addition to the property upgrades, Koslowski said he makes sure the resort keeps the market well informed about what the resort has to offer.

“This is achieved in many ways. Once a year, we come up with a marketing plan, strategizing key interest groups,with local and targeted area events. We carefully research and identify all organizations to approach for cross-promotions and advertising,” he said.

Additionally, Koslowski, Zielke, and others on staff partner with companies which specifically service Fort Lauderdale and the LGBTQ community. “We review our online strategies — storytelling through interaction and conversation; improve on responsive updates to design, promoting customer feedback, upgrading photos and video, and refreshing content with new and robust information,” Koslowski said.

“For instance, our spa soon will be offering guests a faster way to book their appointments right through their smartphones. This will give our clients a customized and streamlined experience, simply by selecting their preferred therapist, work within their availability, and choose their treatments,” he said.

For more information, go to www.GrandResort.net.