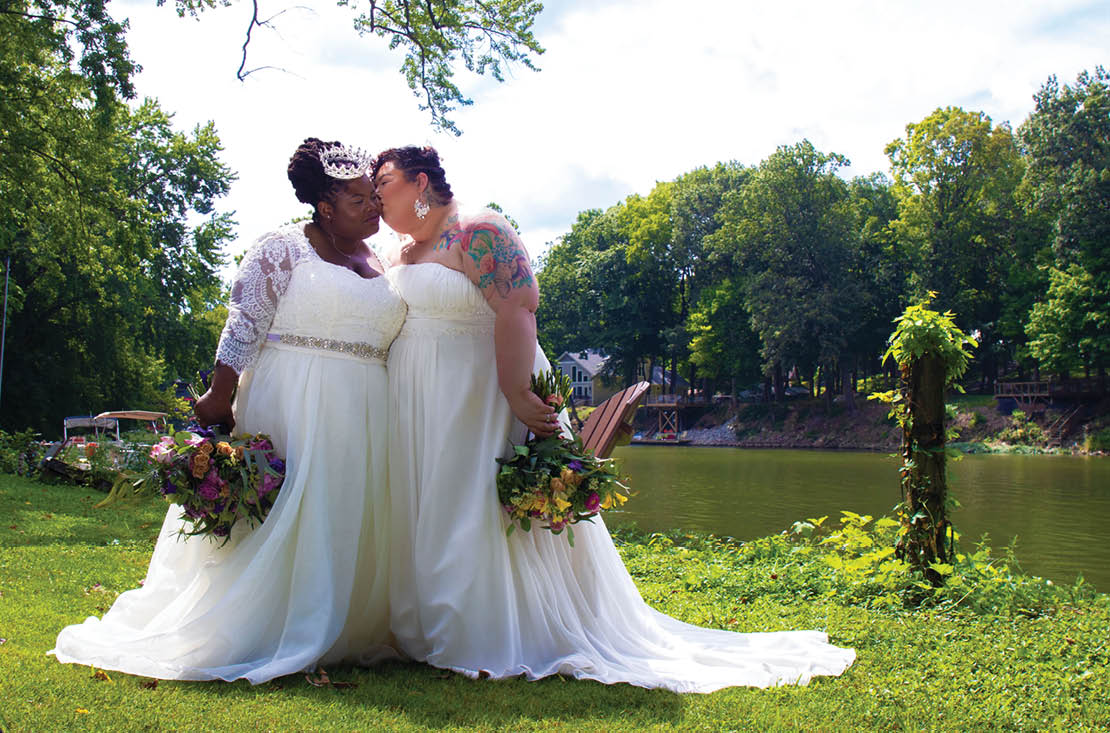 Chaya Milchtein and JodyAnne Morgan (who goes by her surname) rented out an empty Airbnb in Indianapolis a couple months ago for their wedding. Although no friends or family were physically present due to COVID-19 safety concerns, thousands of people worldwide watched the beautiful ceremony live on Facebook. Besides the queer couple, the only people in attendance were their officiant L.S. Quinn, a queer, plus size artist who traveled from Ohio to marry them, and queer, black, and plus size vendors including photographer Danielle Lawson from Natural Nerd Designs, Indigo & Birch Floral Company, Aesthetic Artist Agency, and Originails Salon and Spa. Milchtein, an automotive educator, writer, and speaker from Milwaukee, Wisconsin, met Morgan, a security worker in New York, four years ago. OutClique had the opportunity to chat more with Milchtein about the wedding and why it was such a beautiful and unique experience.

Denny Patterson: Hi, Chaya! Thank you for taking some time to chat with me. Let me begin by asking, how did you and Morgan meet?

Chaya Milchtein: [Laughs] It’s a funny story. We met at the circus. I was getting my nails done at a salon in Brooklyn, and a customer came in to talk to my nail tech, Richard. They said to him, “Hey, I have this ticket to Barclays Center. Are you interested in going? It’s for tonight, somebody dropped out, and it’s a really good suite.” Richard was like, “No, I’m working.” I asked what the ticket was for, and they said the circus. I was like, “I have never been to the circus; I would be interested in going.” I was raised in a Hasidic Jewish home, and that was not something you would go to. So, I went and thought nothing of it. It was an interesting experience, and I went home. A few days later, I got a Facebook message from Morgan who asked me if I had been at the circus a few days before that. She had seen me and liked my dress. Apparently, my queer self stuck out like a sore thumb. I was wearing a short red and black sweater dress and thigh high boots. Anyhow, it was an experience. She has seen me in a queer Facebook group and recognized me at the circus, so she reached out.

DP: Do you two currently reside in Brooklyn?

CM: No. We met and lived in Brooklyn, then we moved together back to my hometown of Milwaukee, Wisconsin. We moved because Morgan did not want to live in New York. She always wanted to move out and go to a place with more nature. You know, things New York does not have. We went through a lot of different places, and we settled on moving to Wisconsin.

DP: Why did you decide to get married in Indiana?

CM: We got married in Indiana for a couple of reasons. One, we love to travel, and this was the only place we could go during the (COVID-19) pandemic. The cases were also much lower there. From the start of the planning of the wedding, it was incredibly important for us to make sure that we did not in any way endanger anyone’s life. That just defeats the purpose. We decided on Indiana for that reason, but also because it is very easy to get married in Indiana. Like, it is considered the elopement capital of the Midwest. We went to Indianapolis. You can do the whole wedding license process virtually right now, and you can get a wedding license the same day you get married. There is no need for witnesses, so it is very easy to do.

DP: How did the empty Airbnb come into play?

CM: Well, I think a lot of people get married at Airbnbs! The fact that it was empty was only because we did not have any guests. Part of being COVID-19 safe meant that we had a completely virtual wedding and the only people that were at the Airbnb were the vendors that were helping us. They were masked during the time that they were helping us. We initially picked a hotel in downtown Indianapolis, but it didn’t work out because I needed to have the wedding earlier in the day than we would have checked in. My siblings live all over the world, and I wanted them to have the opportunity to be able to watch the wedding. Like, I have a sister in Paris, a sister in the Netherlands, and a sister in Israel. So, the wedding had to be a time where they could watch. I started looking for other places to do it, and it made sense to do it at an Airbnb since it was just a tiny wedding for the two of us. I found this Airbnb that butted up right to the White River. It was a beautiful location, and so much nicer than the hotel would have ever been.

DP: Can you tell us more about collaborating with queer, black, and plus sized vendors to create this unique and beautiful ceremony?

CM: Sure. It was very important for us to showcase vendors that aligned with our communities, the communities that we want to support, and small businesses. It has always been important to me to bring people up with me. I have been very lucky to have various supportive groups rally behind me that have offered me incredible opportunities to put my name, work, and business out into the universe, so it was important for us to uplift people from our communities in the process of the wedding. It was also very important to have a black photographer so that we could showcase my wife in all of her beauty by somebody who actually knows how to photograph black people and their skin. It was important to have a makeup artist that did not just dabble once in a while in doing makeup on a black woman, but actually was intimately familiar with it. My wife had locks that cannot be done by just some random white person. They had to be done by somebody who specialized in it. It was important that our ceremony be officiated by somebody who shared our beliefs and was from the communities that we are from. I understand that for some people, the officiant is pretty distant, but I did not want somebody standing up there who had no connection to our struggles or what we have been through and how we survived.

DP: Over 10,000 people tuned in to watch your wedding live on Facebook. How did it feel to know that so many were watching?

CM: It was amazing! I posted our wedding invitation publicly, and I always expected that there would be a lot of people, but certainly nothing to that extent, and certainly not to the incredibly warm reception we got from people of all different kinds of backgrounds. I recently wrote a viral tweet about the New York Times cooking community, and the funny thing is, I got into the New York Times cooking community surrounding the events of my wedding. I posted about my wedding, venue, and all of that, and this community of people who I did not expect to have any passion for two queer women just showed up in every single way possible. Everything from gifts, messages, everything you can think of. It was pretty incredible, and we wanted the wedding to be an opportunity for people to see and be a part of our joy.

DP: What kind of message do you think your wedding sent to people?

CM: I think there were a couple messages. One, that you can have a beautiful intimate wedding on a very public platform, and that you can have a beautiful intimate wedding during the COVID-19 pandemic. Every single thought about every single detail was there. I have been watching Facebook wedding groups and things like that. A lot of people are just devastated by COVID-19 and what it is doing to the wedding of their dreams. The ones who are choosing to elope are doing it very simply without caring for the details that were very important to them. We wanted to make sure that every single detail counted. We couldn’t have this big, flashy, traditional wedding, but we can still have the beautiful wedding gowns, the accessories, and the ceremony that was custom tailored to us. In fact, I probably wrote two thirds of the ceremony. Traditions were molded to fit our lives, and this also offered a moment of joy during a very difficult time. It let people have a moment to take a break and collectively breathe. I do not believe that weddings fix everything. I think there are a lot of things that go around, like “weddings heal all divides,” and “they are all so beautiful.” I do not have any notions like that. I do not believe our wedding fixed anything, healed anyone, or that interracial marriage is the way of the future. None of that is true. However, it does give people hope. It is something that people can feel emotionally and intimately inside them. That counts for something.

DP: Any plans for a honeymoon?

CM: After we were featured in Metro UK, Airbnb got in touch and gifted us $10,000 in vouchers towards our honeymoon. It was incredible. However, we have not planned the honeymoon because of COVID-19. There is no way that we are going to risk people’s lives just so we can have a vacation. So, we decided to have our honeymoon in August of next year for our one-year anniversary; fingers crossed. Hopefully COVID-19 will be over long enough before then that we can make a plan.

To stay up to date with Milchtein, visit her official website, www.MechanicShopFemme.com.