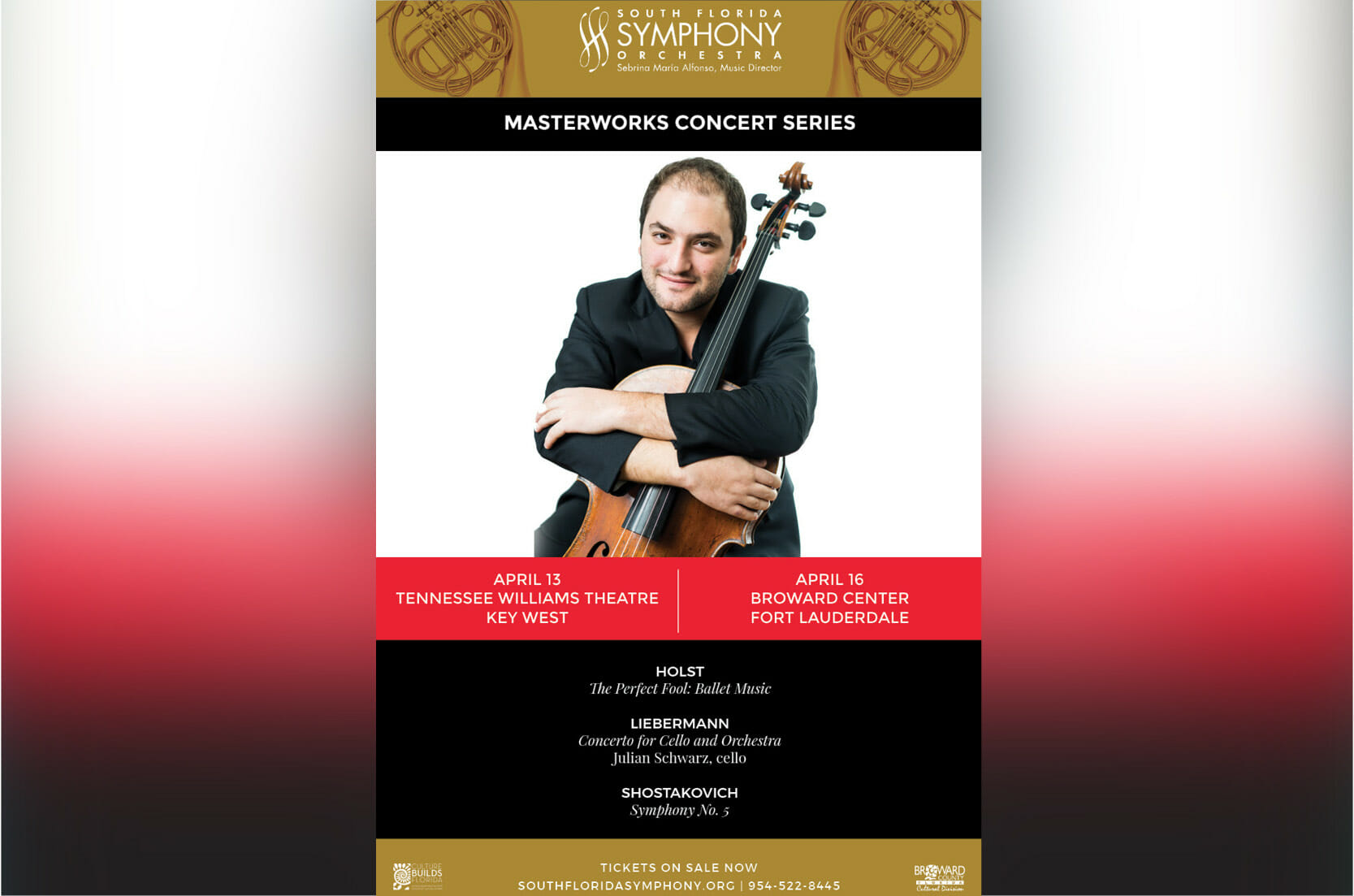 Julian Schwarz is a prestigious cellist who is excited to make his debut with the South Florida Symphony Orchestra for their Masterworks IV series on April 13 & 16. Born to a multigenerational music family, Schwarz’s powerful tone, effortless virtuosity, and extraordinarily large color palate are hallmarks of his style. After performing his first concerto at the age 11 with the Seattle Symphony and his father Gerard Schwarz on the podium, he has since graduated from the Juilliard School and led an active career as a soloist. Schwarz has performed with prominent orchestras around the world and is a supporter of new music. I had the pleasure of chatting more with Schwarz about his upcoming performance with the SFSO and his overall passion for music and the cello.

Tell us more about your upcoming performance with the South Florida Symphony Orchestra. Is this your first time performing with the SFSO?

It is. The performances I am doing with the SFSO are very exciting for me because we are performing a piece together that I commissioned last year, which is the Lowell Liebermann Cello Concerto. For me, it is the project I am most proud of so far in my career, by a lot. It brought together so many different aspects of what I love doing. First, of course, playing my instrument. I adore that, and I adore playing concertos which is what I am going to be doing in South Florida, but I also love new music and championing pieces and composers I think are masterworks. So, what I did, with the help of a close, personal friend of mine, and the six orchestras that were members of the commissioning team, I was able to commission one of my best friends and one of the most wonderful living composers, Lowell Liebermann. This project has been so fulfilling and I am excited to perform it.

Fabulous! I hear Maestra Sebrina Alfonso is wonderful to work with.

That is what I hear as well. Only the most wonderful things about Maestra Alfonso, and the region that she is reaching is in need of great art. So many of those communities that she serves are without great music and without professional orchestras. So, with what she is doing to promote classical music in the Keys and in the South Florida regions, it really is of most importance. Especially in the winter time where there are so many snowbirds that are coming from important cultural centers in the northeast and they are deprived of what they love for so long and they are in search of great music.

What are you looking forward to the most about this performance?

Sharing this piece with Maestra Alfonso and the musicians. Whenever I have the chance to play this, in the past, it is met with skepticism because it’s a new piece. You don’t know what you are going to get. Musicians in the orchestra and conductor are taking a leap of faith in programming a new work without necessarily knowing what it is going to sound like. To me, I get such a rush out of those moments when it is clear that the voice of the composer and the intention of the piece are coming through to all involved. They come back to me and say they were expecting something good, but not like this. It is a real masterpiece, and that is what I am most excited about.

I read that you come from a multigenerational musical family. I am assuming you were practically born with a passion for music.

I absolutely was. I think all my siblings, cousins, aunts, and uncles were born with that passion. Whether everybody became a professional is a different story, but across my whole family, we are either musicians or music lovers. A lot of my cousins are coming of age now and doing important orchestral auditions. It is incredibly special.

Who are some of your biggest musical influences?

First, I would say both my parents. My father, who is a well-known conductor, I was his student. I got the greatest education he could offer because of the fortune of being his son and hearing all his symphony concerts in Seattle. Growing up, I went to four concerts a week my whole childhood. I just learned so much. Then again, the person who doesn’t get much praise for being my educator and my teacher is my mother. She was an equal to my father in pushing and teaching me. They both had slightly different takes on music, so I was able to get different things from each of them. As a cellist, I would have to say my greatest influences are Lynn Harrell and Joel Krosnick. Growing up, Lynn was my favorite cellist. I had all his CDs and I had the chance to study with him in high school, and he really imparted so much of his ability and style to me. I learned just by watching him and listening to how he played and trying to imitate it. Then I studied with Krosnick while at Juilliard and later became his teaching assistant. He was an equal of influence and taught me about music in such a different way than Mr. Harrell. He opened my eyes to all the different ways to interpret it and all the different possibilities. He made sure I had a comprehensive knowledge of how to create different colors and sounds, and that is something I am especially using in this Liebermann concerto.

You made your concerto debut at age 11. Take me to that moment in your life. What were you feeling?

As much as it was the most terrifying moment of my life at that point, it was also the most natural. I had a teacher that was very influential, and he basically allowed me to love music and play music without being concerned with the technical side. So, basically, I just played, and I wasn’t thinking much about the technical technique. I was thinking about the music. I went out there and I wasn’t thinking about what my hands were doing. I wasn’t thinking about the intricacy of cello technique. I was just playing, and it was natural. I remember my father was conducting and I didn’t look at him once. All I did was go out there and play and look at the audience and enjoyed the moment. I trusted he would be right there with me, and of course, he was.

Besides your debut performance, what would you say are some of your other most memorable performances?

Two that come to mind right off the bat apart from the premier of the Lowell Liebermann concert last year, I did a concerto in 2010 that was the opening concert of my father’s final season as music director of the Seattle Symphony. This was not only a great piece and an amazing premier, but it was such a meaningful moment. I had worked on it so hard, and I was able to enjoy the moment and not focus on all the little intricacies and be able to share that incredible moment with my father. The other time, I started dating a pianist about five years ago and she has since become the love of my life and we are getting married. During a recital tour, one recital pianist had to cancel. This was early on in our dating, so I called her, and we performed together. I cannot remember being as happy as I was when we discovered not only were we a match romantically, but also a match musically. Often times, that does not happen. We performed that recital at the Austrian Embassy in Washington D.C., and it was a revelation for us. Since then, we have grown to adore playing together and we want to do a competition together. There is a lot of artistry we have yet to discover, but it is natural making music with her.

If you did not pursue music, what do you think you would be doing with your life?

I don’t think anyone has ever asked me that. I would easily still be involved with music somehow. My love for music is not specific to any part of the job. A lot of my friends, they love cello as an instrument. Love playing it, love performing with it, and the music is second. For me, the music is first. No matter what I do, I would still be a subscriber to the local symphony orchestra and still be as involved with music as possible. If God forbid anything where I could not play the cello, I would still try to teach or conduct music. I really cannot get away from it.

What do you hope audiences take away from your performances?

I hope they are moved emotionally. That is what my goal is every time I get out there and play. I hope they are excited, and they are inspired by the piece, but I want to create emotion within them with the colors I create. Music is consuming for me, and my goal is for it to be consuming for audiences as well. I put all my emotions into my music, and if I am the only one who feels them, then I have failed. My way of making music is not for myself, it is for those who come and attend. So, with this piece, I hope to not only convince them that it is a masterwork and show them it’s a great piece, but I also want them to leave feeling like they have been through an emotional journey.

What would you say is your favorite part about performing?

Listening. As a cellist, I am rarely performing by myself. I have all these people around me to listen to, and since I spend so much of my life practicing alone or creating sounds alone, when it comes to performing, I have to listen and react to the others performing with me.

How do you keep yourself motivated?

What would you say are some of the challenges of being a professional cellist?

The biggest challenge for me is that cellos are third on the totem pole as far as important solo instruments. My life is divided by performing concerto, performing recitals, performing chamber music, and teaching. The issue is, there are fewer masterpieces written for cellos than there are for violins and pianos. If orchestras are looking to engage soloists, the first two options are pieces written for violins and pianos because there are many more great works written for them. The demand for cellists is low, so I try to create a distinct, unique voice. I hope if someone knew my playing, and they heard me blindly, they would know it is me. The second biggest obstacle is creating enough sound. Something that is overlooked a lot with classical music is that there is no amplification. If you have one little cello in front of an orchestra of 80 people, the amount of sound produced is enormous. It can be a little difficult to project over the orchestra. A lot of my work onstage is to create a large sound while maintaining its beauty.

What is next for you? Any upcoming projects we should be on the lookout for?

The Liebermann Project took about six years to complete, and it was such a great labor of love, that I took a year to just enjoy performing it. So, I always have my eyes looking forward with that. I am also involved with a few interesting projects, one is creating a CD recording with my wife to be. We hope to get that out in the next six months. I am working on some other commissions, but it is too early to get any more info out on that yet.