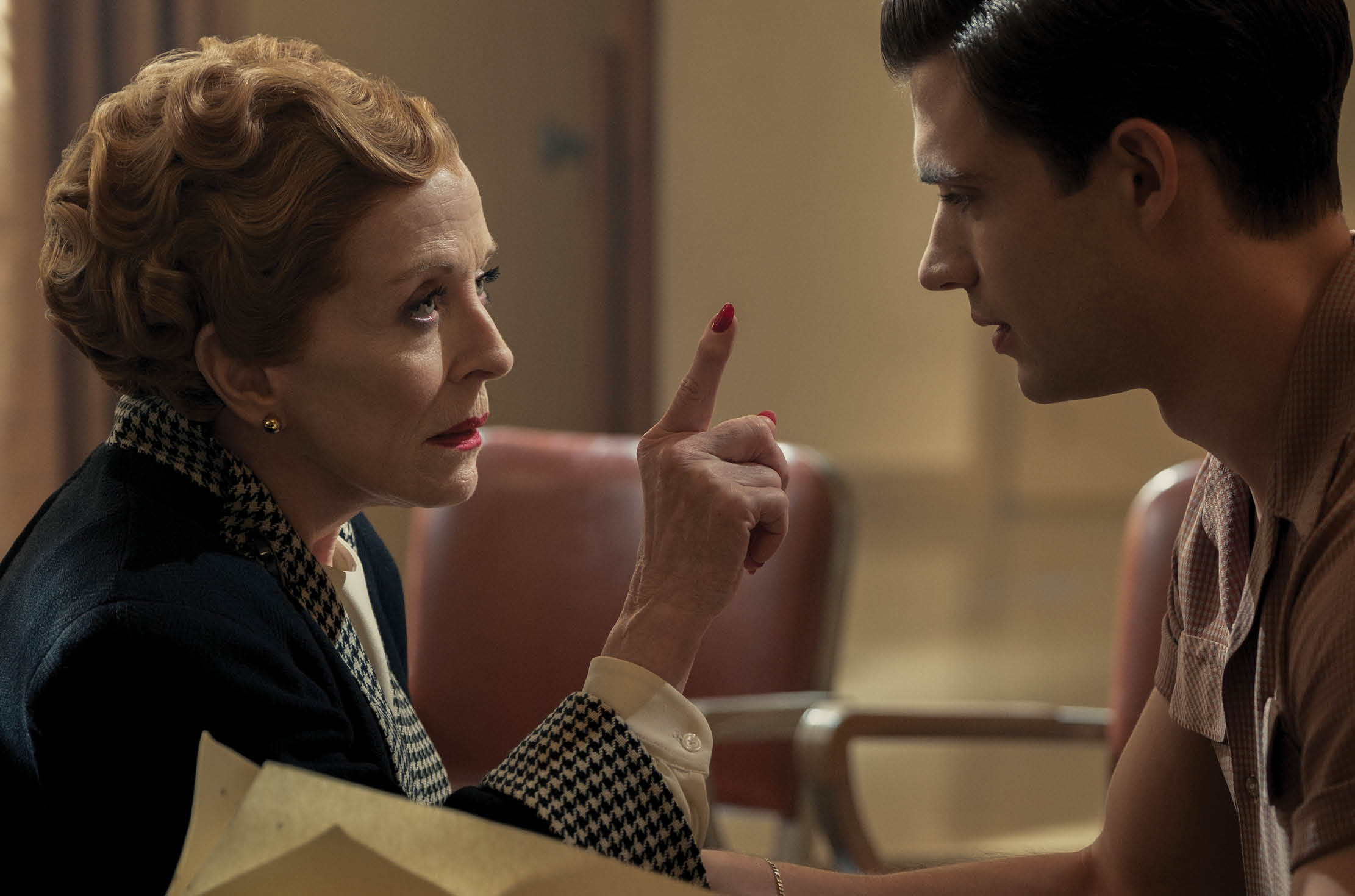 According to Ryan Murphy, “Casting a television show is like casting a dinner party. It’s like, ‘Well, who do I want to sit next to for the next six months of my life?’” In the case of his new Netflix series Hollywood, premiered in May 2020, he set an amazing table, and seated his guests just so. One such guest is out actress Holland Taylor who plays no-nonsense 1940s movie studio exec Ellen Kincaid. Ellen is someone we can fall in love with immediately; a smart, tough, single career woman who plays a big part in keeping the flicks flickering. And who doesn’t love Holland Taylor? Playing sassy roles on TV (Bosom Buddies, The L Word, Two and a Half Men, and The Practice, for which she won an Emmy), in movies (Legally Blonde) and onstage (playing Ann Richardson in Ann, for which he was nominated for a Tony), Taylor has established herself as an in-demand actress of considerable talent. Taylor was kind enough to answer a few questions ahead of Hollywood’s Netflix debut.

Gregg Shapiro: What was it about the way that the character of Ellen Kincaid was written that appealed to you and made you want to portray her in the Netflix series Hollywood?

Holland Taylor: First of all, Ryan told me that he was writing this character for me. Which is, right away, a very exciting opportunity, because Ryan has a special feel for actors that has proven itself over and over again. He has an idea of what they can do and what special thing they can bring to a character. If he particularly wanted me to play this character, I was very game to do it. I didn’t see a script before I accepted it. When I read the script, I got very excited because she’s an attractive character. You don’t always play people that you like. You can play a great character, but that doesn’t mean you would like the person at all. In fact, I’ve played plenty of characters that I wouldn’t like. But I love her. I would love to know someone like her. In those days, she’s the kind of woman who found herself in a man’s power world where her female qualities allowed her to be comfortable exercising her opinion and views. It’s almost like it was in a family situation where the boys would accept her because she was so smart and game and charming. She could operate in the world of men. She has a real partnership with Dick Samuels (out actor Joe Mantello), the guy who’s actually making the movies at the studio, where it would never occur to her not to voice a strong opinion or one that challenges him. She would be comfortable and easy and fun in sharing her views.

GS: Ellen, along with Avis (played by Patti LuPone), become powerful women in the movie industry. How different do you think the world of entertainment would have been if there had been more women in power all along?

HT: There always were some women in certain areas. In the early days, women were great editors and costume designers. Who knows what power Edith Head had beyond costumes? She might have championed an actor or actress that we don’t know about. I’m sure she could get rid of an actor or actress that she didn’t care about. Irene Selznick was a great force. There were wives of studio heads who were powerful. Nothing like what there is today. But I think the world is always improved by having every group represented in humanity present at the table. We’re seeing it now in politics. We’re going to be a much better country when half the people in our government are women. We’re going to be a much better country when an appropriate proportion of people in our government are Hispanic and Black or immigrant. Our country is enriched by this. Humanity’s table is best served when everybody is at it.

GS: I’m glad you mentioned costumes, what was it like to wear those period costumes, and did you have a favorite one?

HT: It was wonderful! It’s a period I love. I was a kid in the 40s, so I don’t personally remember the clothes that adults wore, but I saw all those movies. I have a real affinity for those clothes. When I’m dressed in those clothes, I feel (like) this is how I should be dressing. I really look just right in those clothes. I’m in the profession at the wrong time. I would have done very well if I was an actress in the ‘40s, I would have fit right in. I have a particularly sweet story to tell about that. I brought in some pictures of my parents. They were a glamour couple. Pictures in those days were always black and white. I think black and white pictures have much more information in them than color pictures. I brought in a lot of snapshots, which were so beautiful. The quality of the film stock was so different from today. The clothes my parents were wearing were great. These glamour couple postures of this couple in Philadelphia in the 40s. Unbeknownst to me, they picked out one thing my mother was wearing and they copied it. This plaid blazer with the pocket set with the fabric going in the opposite direction, with this blouse and pin. They made it for me to wear in a scene. I was dumbstruck. I thought it was so sweet of them to do! They gave me that outfit when we wrapped.

GS: The hairstyles from that time were also distinctive. What did you think of Ellen’s do?

HT: Michelle Ceglia is one of the great hairdressers of all time; she’s incredibly great with wigs. They take so much time to maintain! She’s always at work late redressing them, getting them ready for the day’s work, long before I’m getting ready for the day’s work. They were beautiful. Of course, they make the clothes work, too. I love wearing hats, too. I really think you’re put together when you’re wearing a hat.

GS: What do you think of the way that Hollywood blends fictional characters with real ones?

HT: I think that was a great idea. I think it was a great idea to do the revisionist history thing, too. I don’t think it was part of Ryan’s original concept which he spoke of as a love letter to Hollywood glamour. It turned out to be much more than that. When we see these revisionist history scenes, particularly as they involve the exclusion or inclusion of different kinds of people, it’s very moving to see the Rock Hudson (Jake Picking) character walking hand in hand with his boyfriend at the Oscars. That would have been the most unbelievably daring thing to do in the ‘40s and nobody did it! You can’t help but wonder, what would have happened? When we see Camille (Laura Harrier) winning an Oscar and getting cast in a role she normally would not get. Or Eleanor Roosevelt (Harriet Sansom Harris) saying, “Do this for this girl! Hollywood can teach us!” Of course, Hollywood has taught us many things. Those bold lessons, when you see them and experience the sadness and loss of opportunity that those chances weren’t taken, I suppose it might inspire someone to perhaps be braver.

GS: One of the fictional characters, Ernie (Dylan McDermott), is based on Scotty Bowers, who not only wrote a book about his experiences as a gas station gigolo and pimp, but was also the subject of a documentary. Was the legend of Scotty Bowers something of which you were aware in Hollywood lore and what did you think about the character of Ernie?

HT: I think the situation about the gas station was because of the Scotty Bowers story. But Ernie, as a character, is not like what Scotty Bowers was at all. I actually knew Scotty Bowers. Scotty was kind of like an elf, a gamine, charming pixie kind of a guy. I never was quite altogether sure about some of the tales he told. But that the escort service existed is absolutely true. You do encounter guys, like the character of Ernie, who had a failed career and who had to make do with something else and always felt thwarted in their dream. Sometimes those people do emerge, and they have some opportunity late in life. It was great fun to see Dylan play this guy who had so much gusto and charm, and who never played it right when he had the chance. Then he gets a second chance and a chance to be a star. We love stories like this and sometimes they’re true.

GS: Because of the post-World War II setting of the film, it made me think about Dorothy Arzner and Ida Lupino, women directors, from that period. Do you think you might someday want to direct?

HT: I’ve often thought about Ida Lupino. She was such a favorite! She was a wonderful character actress. People don’t even know that she was a big director. She didn’t do major films, but she was a really smart woman. You could see this native intelligence in her. She had ambition and she saw how it could be done. They had the sense to let her do it. She obviously didn’t have some empty ambition of fame for fame’s sake. She was content to be a behind-the-scenes director. I don’t imagine she gave a fig whether or not she was promoted publicly in that role. She had work to do, with an intelligent roving mind. She wanted to be creative and she was. Now, the women directors who are around who are so gifted – (Kathryn) Bigelow and Ava Duvernay, there are just too many of them to even think of. There’s something about a director; I actually think it’s a very maternal role. It’s a nurturing role. There are directors who have had great success with actors by scaring the shit out of them and being monsters and being a dictator and brutalizing them. I suppose you can get things from people by that approach. But I think a nurturing approach is better. There are lots of women directors who will be the rival of any men directors. The world is better when everyone is represented.

What’s So New About Normal?