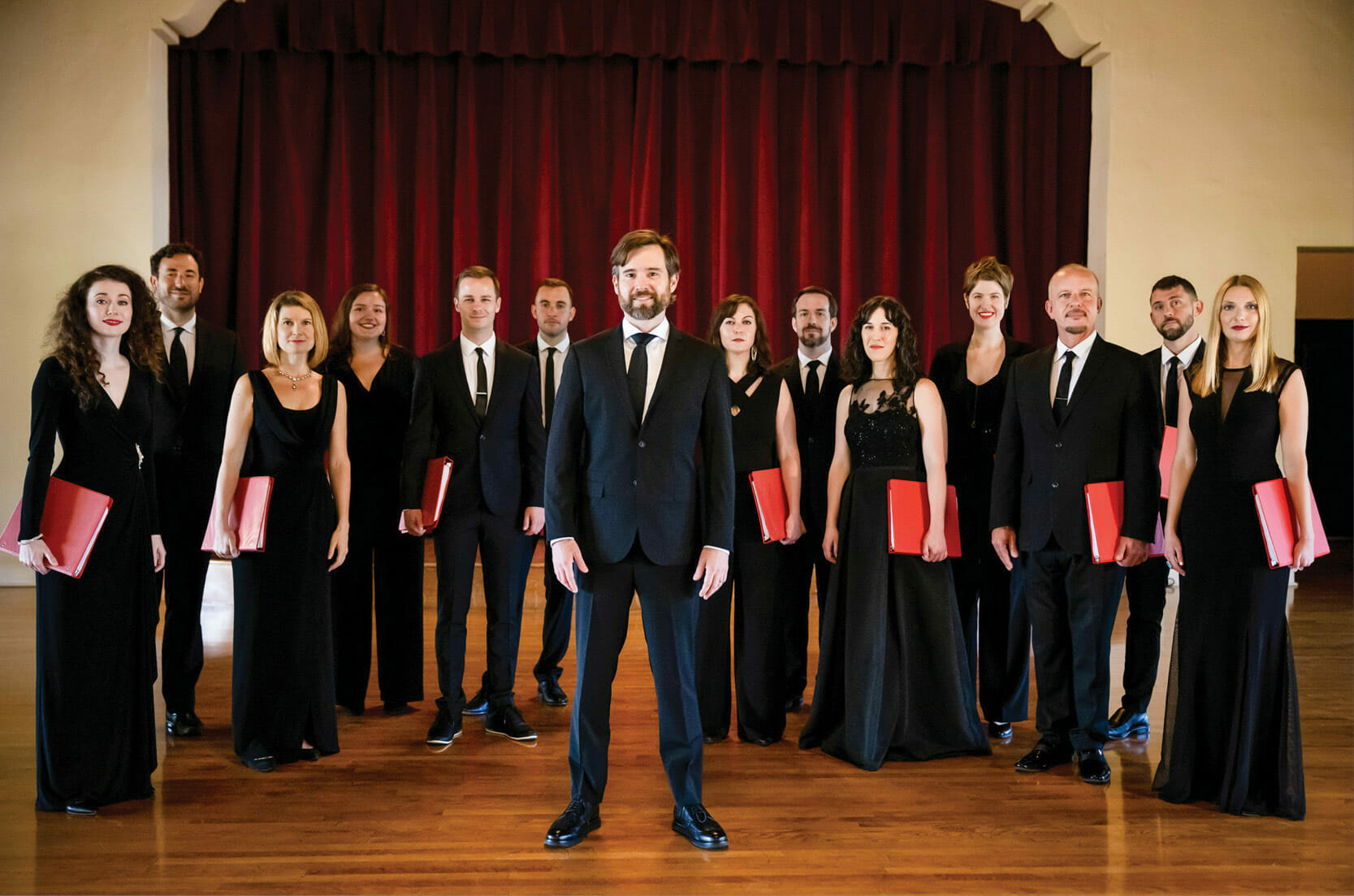 Seraphic Fire, South Florida’s Grammy-nominated professional vocal ensemble, is ready to return to the stage and delight audiences with live, in-person concerts. From the music of Bach and Handel to collaborating with stage director Francesca Zambello, there is a lot in store for the 2021-2022 season. OutClique spoke with Conductor Patrick Dupré Quigley, who founded Seraphic Fire in 2002. A long-time champion of rising vocal and instrument concert artists, he has nurtured a robust audience-ensemble relationship with the South Florida community.

Denny Patterson: Can you begin by telling us what Seraphic Fire has in store for its 2021-2022 season?
Patrick Dupré Quigley: We have a lot in store. Some of our season is programs that we had planned and were cancelled during the pandemic, and others are sort of new. We are opening with Pergolesi: Stabat Mater, featuring two great Seraphic Fire alumni, Reggie Mobley and Lauren Snouffer. Then after a year of hiatus, our annual Christmas concerts, which are sort of at the heart of Miami and South Florida’s Christmas celebration. We usually do about 10 nights of performances, and they have come to be tradition for several families. In January, we are very excited to welcome internationally lauded stage director Francesca Zambello, who has, among other things, staged Wagner’s Ring Cycle and The Little Mermaid on Broadway. She is a remarkable artist, and she will be directing our semi-staged production of Hildegard von Bingen: Ordo virtutum, which is a morality play from the 12th century by Hildegard von Bingen, who is a saint in the Catholic Church, but also considered the ‘Mother of Natural Sciences’ in the German speaking lands. She was a philosopher and communicator who corresponded with kings, popes, and many other folks. From there, we have the Enlightenment Festival in February, where we will perform music from composers from the Age of Enlightenment. This year, we are primarily focusing on the music of Johann Sebastian Bach, and the English composer Henry Purcell. In March, we are performing a program of music for men’s choirs, so music that has been written for either professional or fraternal men’s choirs over the past 300-400 years, and that will be conducted by our associate conductor, James Bass. Lastly, we will be performing the piece that was supposed to be the conclusion of our 2020 season, but was cancelled for obvious reasons, and that is Handel’s Messiah. Members of Seraphic Fire, as is our tradition, will step out of the chorus and sing the solos, and we will perform the entire librettos. I think this is the first time that we are performing the complete, uncut work since 2004.

DP: How excited are you and the ensemble to have live in-person concerts again, and what did you miss the most about it?
PDQ: We are beyond excited. I think there is a hunger of the soul to be back in person. What we missed most, and I think this goes for the musicians and the audience, is the physics of music. Unlike most performing arts or creative arts, music is entirely sort of a scientific construct. We vibrate our vocal cords, we are the instruments that we’re playing, and that translates to the ears and bodies of the people who are in the room with us. For the past 18 months, we’ve had to do this through speakers and headphones, which are interesting, but it’s coming from a much smaller source than when it comes from 13-40 people on stage. For music, having an audience in the room, they make music with us because they also vibrate at the same time as our instruments and voices. You can take a picture of a painting, or put an opera onto a video screen, but for something like music, if the audience isn’t in the same room with the creators of the music, the full experience of music making isn’t happening. It requires both someone to perceive and someone to perform. We have been mute in that aspect. Even though we’ve been doing all these incredible online programs, putting together videos, and releasing programs, it’s not live music making. Live music making is not only a mind opening experience, but it’s a heart opening experience because our bodies actually vibrate when we hear music live.

DP: I assume COVID precautions will be set in place?
PDQ: Yes. I think we are requiring vaccinations from everyone involved. Staff, audience, musicians, and everyone will be required to wear masks. We will be observing social distancing in terms of seating, so we are doing everything we can to have a safe and fulfilling return to live music making.

DP: Last year, I interviewed James about the Christmas concert, and he told me it was going to be recorded and available to view online. Will you be doing that with more concerts in the future?

PDQ: Yes! This year, we are excited to announce that we will be able to sell a digital subscription for people who are outside of South Florida or unable to attend in person because they are still observing social distancing. We are going to video and audio record all the programs this year, and they will be available online in a digital archive, which will also include all the material that we have from last year.

DP: How long have you been a conductor with Seraphic Fire, and have you always had a passion for music?
PDQ: I have been the conductor of Seraphic Fire since the first concert. I am one of the founding members, and I have been working in vocal and instrumental music since I was around 13. People often refer to this as a passion, but it isn’t a passion. It’s a calling and a vocation. It’s something that we do because there is something different about music. It’s all about perception. There is no visual, you can’t touch it, it’s not tangible, and you can’t necessarily package it. It’s a fleeting thing, particularly in live performance, that allows us all to suspend the ways that we have been perceiving the world. Because this is an individual pursuit from the audience and a collective pursuit of the musicians, music allows us to be free in our mind and give up a little bit of worry on the things we constantly focus on. We can focus on this beautiful, invisible thing that humanity has been doing since before anything else. Singing and music are absolutely the first art form that humanity participated in. We had singing before we had paintings, and for me, particularly over the pandemic, one of the things that I’ve realized about music is that it allows us to have conversations about things that are in our minds. We can talk about exactly what we are hearing and whether we like it, we don’t, if it brings up nostalgia for us, or if it creates a new sensation that we have never felt before. Those discussions have been absent from our discourse for almost two years now, and that’s what makes me the most passionate about music making. Even beyond my great, great love for Bach, Mozart, and contemporary American composers. The ability to get together and perceive together, that is really important for our lives and for our society. I am so glad we are going to return to that.

DP: What do you hope audiences take away from a Seraphic Fire performance?

PDQ: I just hope that they take away the passion that we have. Both for the music that we are performing, and the pursuit of excellence that professional musicians go through in performing every piece. Seraphic Fire has a 20-year performance tradition starting this year, and when we come to a piece of music, it doesn’t matter what the piece of music is, we embrace it and we embrace it on its own terms. I hope our audience comes in and they are immersed in a world of music that they probably haven’t heard before. I hope they are swept away by it.

DP: Before we wrap up, are there any other upcoming projects you would like to mention or plug?

PDQ: We just released our newest CD, which is the first complete recording of all the pieces as Hildegard conceived of it. We released that about a month ago, and we are very excited to be staging itin January, but we have already been working on it for two years at this point. It’s just a real honor to be able to interact with the music of someone who lived before the bubonic plague. This is someone who was in the height of the excitement of the medieval period as we were coming out of the Roman period of Europe. We are out of the Dark Ages and going into the medieval period where music, as we know it, is just being developed. To be able to interact with music at that stage of its development, and how exciting and exquisite the intricacies of that music are, I hope people will consider either buying or streaming that recording.

Thank Yule for Being a Friend

Humanity In the Face of Tragedy

A Day of Giving