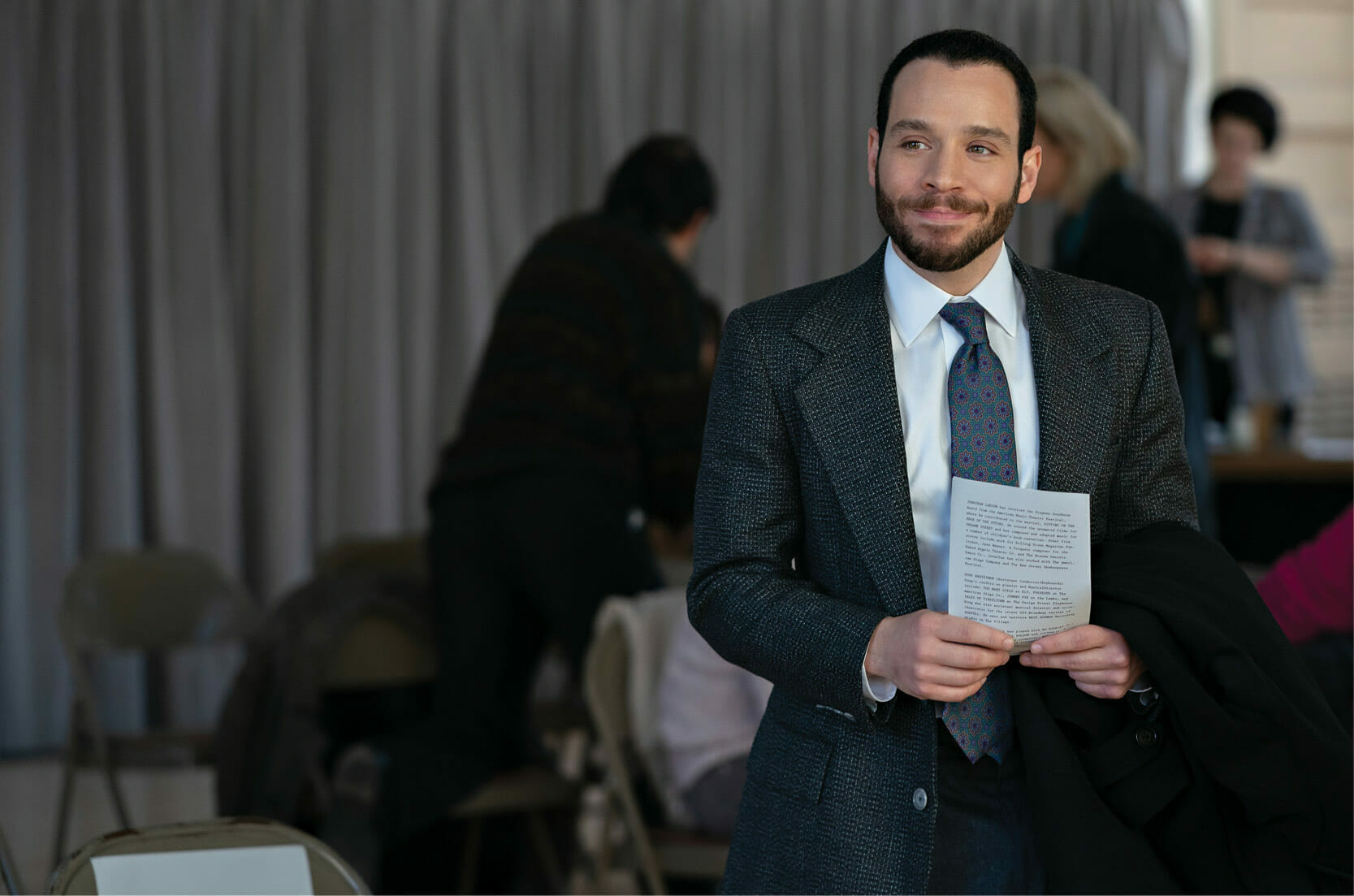 There are few things more thrilling than watching a young actor coming into his own. Not that Robin de Jesús hadn’t already grabbed our complete attention in his debut film performance as sensitive Michael in Todd Graff’s cult-favorite indie Camp. After that, de Jesús went on to acclaim in high-profile Broadway musicals including Rent and In the Heights.

But the last few years may, in fact, be the point of de Jesús’ ascension. In 2018, he returned to Broadway as Emory in The Boys in the Band (for which he earned a Tony Award nomination) and recreated the role for the 2020 Netflix movie version. Now, de Jesús is playing another Michael, in Lin-Manuel Miranda’s movie version of Jonathan Larson’s tick, tick…BOOM! also for Netflix. Co-starring with Andrew Garfield, de Jesús is nothing less than riveting. Robin was gracious enough to make time for an interview in advance of the November 2021 premiere of tick, tick…BOOM!

Gregg Shapiro: Robin, moviegoers, including many folks in the LGBTQ+ community, had their first chance to see you act in your memorable film debut as Michael in Camp. Can you please share a couple of memories from your Camp experience?

Robin de Jesús: I love talking about the Camp memory lane. [There are] a couple memories that stick out to me. The first thing that came to me when you said that was the paralyzing fear that I experienced [laughs]. We were all non-union actors. Most of us had just done stuff in high school. Some people, like Anna Kendrick, Sasha Allen, had been out there, sort of doing the thing and auditioning and being on Broadway. But I remember hearing everyone sing for the first time and realizing, “Oh, man! This is not high school where you think and know that you’re the fiercest person in the room.” For the first time, I was like, “Woah, the talent is absurd.” It was intimidating, but then it was also great to have that energy. I’ll never forget hearing Sasha Allen sing for the first time. I’ll never forget hearing Sasha Allen mark what she sings because her marking is just as good as her being full out. She’s just so musically smart that she finds alternate melodies. It was so much fun.

I’ll also never forget the feeling of shooting that scene on the lake at the end. During that movie, I had always considered myself a singer who acted. That movie really affirmed that I was an actor. For me, I needed to have that for myself. It happened several times on set, but specifically with that scene, it was the first time in my professional career where I experienced preparation meeting divinity. We rehearsed that scene and everything so much, and then the schedule got off and it wasn’t ideal. We’re young, this is most of our first movie, so we’re going with the flow, and we’re excited. There’s that vibration. We get to that scene and we’re so prepared that this sort of surrender happened as an actor that allowed the scene to vibrate differently. I think divinity entered the room. There’s a reason why that scene, in the movie, is so grounded and so real and beautiful. I’m so proud of it.

GS: Your latest movie project is the film adaptation of Jonathan Larson’s tick, tick…BOOM! Your connection to Larson precedes this by a few years when you were a cast member of Rent on Broadway. What is it about Larson’s work that speaks to you and appeals to you as a performer?

RdJ: Hands down, the humanity. It’s the humanity because Jonathan, even in Rent, there’s no real bad person. Yes, Benny’s annoying. But it’s society, it’s the system. It’s crack and the AIDS epidemic. It’s like going back to “are you being present? What are you focusing on? Fear? Love?” They’re all themes that are universal and that we all know. But, to me, he writes them in a way that is so vulnerable and so unabashed; it’s almost borderline cheesy.

But it’s not because you can’t run away from the truth that he’s spilling. He was such an honest artist. He was a true artist and his work, to me, pulled at the heartstrings in the simplest ways, because it’s about basic wants and needs. Jonathan wasn’t only responsible for my Broadway debut, but he’s responsible for the second show, as well, because without Rent, Lin wouldn’t have given himself permission to write In the Heights. He’s always said that. Jonathan’s responsible for my Broadway shows, one and two [laughs], and now this.

GS: I’m glad you mentioned him because the movie adaptation of tick, tick…BOOM! was directed by Lin, someone else with whom you have a connection as you played Sonny in the off-Broadway and Broadway productions of In the Heights. Please say something about the experience of working with Lin.

RdJ: What I love about working with Lin is the shorthand and the trust. Sometimes when you’re learning a new director, it’s like you’re learning a new dictionary. You both obviously want to do great work, but you’re learning [about] each other. With Lin, we have shorthand, it’s established. What that allows me to do is just do my work. Lin can trust me and knows that I know what I’m doing, and I’m going to handle it and do what I’ve got to do. It allows me to do the work and give the best performance possible because we discussed the scenes beforehand, we discussed what we’re going for, and I marinate on that and then I get to set, and he comes in here and there and gives me a couple of notes. His gift with me is that he lets me do my thing.

GS: Your multi-layered portrayal of Michael in tick, tick…BOOM!, a character who brings both humor and heartbreak to the story, is one of the movie’s highlights. What was it about Michael that made you want to play him?

RdJ: I didn’t know that it was going to be Michael. It is funny that it’s the same name as the character from Camp.

RdJ: That is kind of funny. Puerto Ricans with the name Michael. That does happen, as opposed to Miguel. I know I summoned this Michael. I brought him to me. I knew after The Boys in the Band, that there’s an accumulation of really large roles in my resume, and I love that. All the characters that I played, I feel like they have meat on the bone, they’re great, dense characters with so much to play with. But I was very intentional about the next film I made, that it be a quieter performance, something more subtle. I knew that by being showcased in a role that was subtle, and perhaps at times is the “straight man” in terms of the jokes, that that would allow me to showcase maturity. As a man who’s navigating this career, I’m always trying to showcase myself differently. I knew that would really have a currency for me. When I saw Michael, I instantly thought, “Yo, this is it!” This is the perfect showcase that I’ve been looking for and the perfect transition into me being like, “Yo, I’m a grown-ass man [laughs] now.”

RdJ: Thank you, I really do appreciate that. Like I said, it was very intentional. But, also, what attracted me to Michael was the overall piece and the experience of working with the people that I’m working with. Working with Andrew. I’m always a student and Andrew Garfield is so brilliant as the lead. I knew that getting to play with him was going to be amazing and fun, and that we could grow each other. All of those things really did combine.

GS: Some people who work in advertising can find it to be one of those outlets where you can be more creative than, say, if you worked in a bank.

RdJ: One hundred per cent! The story is about three people in the arts who are dreamers. There’s Jonathan, there’s my character Michael, and there’s Susan, Jonathan’s girlfriend. Jonathan’s thing is, “I’ve got to stay in this, I’ve got to have the Broadway show.” But the other two, I think our plots and conflicts are also interesting in terms of the navigation. Our characters don’t necessarily say that they’re no longer artists. They just no longer center their creativity around their jobs.

GS: They don’t need to suffer for their art anymore.

RdJ: Exactly! The navigation is different for everyone.

GS: Bradley Whitford plays Stephen Sondheim in tick, tick…Boom! and Sondheim himself also appeared in your previously mentioned movie debut Camp. Do you think there might be a Stephen Sondheim musical, either on stage or onscreen, in your future?

RdJ: I’m gonna put it right out in the universe. I’m ready to play the Baker in Into the Woods. That’s a dream role. I would love to do George someday. I feel like I’m missing one more. It’s not the role for me, but man, when I was younger, I wanted to play Sweeney so bad.

GS: Two of your recent film credits, tick, tick…Boom! and Boys in the Band (which you also did on Broadway), are movie versions of plays. Is there another movie version of a play in which you would like to perform?

RdJ: Yeah! There’s a play I did years ago off-Broadway at the Labyrinth Theater Company. It was me and Michael Urie and Stacey Sargeant and Aaron Costa Ganis; the four of us. It was this play called Homos, Or Everyone in America. It’s this beautiful story of a young gay couple in grad school, two men. You see them from their first date through the breakup, through the years, being friends, again. A certain violent act happens, but it’s actually a comedy about two people who fall in love via socio-political debates. There’s a screenplay version that we’re going to start shopping around now. I really would like that to be the next film adaptation I do.

The Prom to Play at The Broward Center