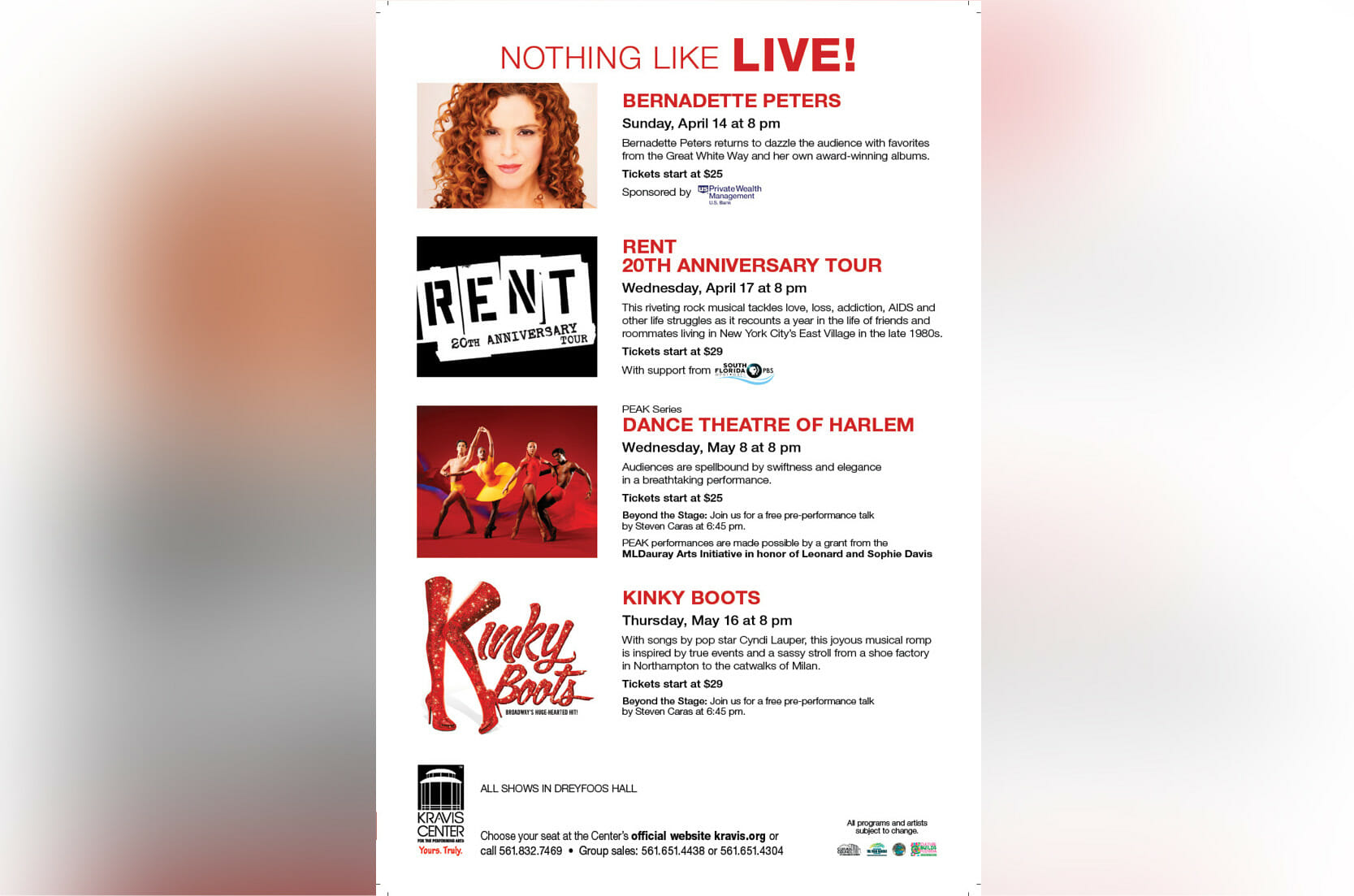 Tony-award winning actress Bernadette Peters will be dazzling audiences with a one night only engagement at the Kravis Centers’ Dreyfoos Hall in West Palm Beach on Sunday, April 14, 2019. With a career spanning five decades, Peters’ voice and talent has made her a legend of the stage and screen. She is one of the most critically acclaimed Broadway performers. Some of her most notable roles include the Witch in Into the Woods, Annie Oakley in Annie Get Your Gun, and Rose in Gypsy. Last year, she replaced Bette Midler as Dolly Levi in Hello, Dolly! Currently, Peters can be seen in the CBS All Access show, The Good Fight, in addition to performing solo concerts around the world.  I had the absolute pleasure of chatting more with Ms. Peters about her upcoming South Florida appearance.

Welcome to South Florida, Bernadette! Thank you so much for taking the time to chat with me today.

Let us start off by talking a little bit about your upcoming performance at the Kravis Center. What can audiences expect?

Well, I sing songs that I connect to and mean a lot to me. This time I added songs from when I did certain shows. Like, I added in some Follies and A Little Night Music, and now I added in some Hello, Dolly! which I did last year on Broadway.

Your entertainment career has spanned for decades. What keeps performing new and exciting for you?

You know, I am always learning. I never did it for look at me, look at me. I always did it like, oh, this song means this or what can I connect with this song. If I connect this, then I can connect to audiences this way. There are many uplifting songs that I sing, and there is Sondheim. Like “No One Is Alone” and “Children Will Listen,” and there are sentiments that I like to be reminded of with these songs. I think back to these concerts and shows and certain things in my life that are important. And there are of course some dramatic songs as well.

Have you ever gotten use to your celebrity status?

I am nearsighted, so I don’t really see people looking at me [laughs]. If people are looking at me, someone else usually points it out.

If you never pursued show business, what path do you think life would have taken you?

You know, it looks more and more like I would be rescuing animals. I have Broadway Barks which is a dog rescue and I think I would have been in a life of service somehow.

How do you prepare yourself before a performance?

I like to stay very focused. People always say, oh let’s go out and such, but when I come to a place to do my show, I don’t like to get sidetracked and break focus. So, I come to a town and I usually get up in the morning and go to the gym, then vocalize, then wash my hair and then I will go to rehearsal. Before the show, I might meditate and think about the songs and what they mean and that kind of thing.

Have you ever gotten stage fright? If so, how did you overcome it?

I think early on I did, but then I just focused on what I had to do. When I went out in character, I had to think about what they were up to and what the song was talking about, that kind of thing. Why I was there.

One of your most iconic roles is the Witch from Into the Woods. If given the chance to reprise this role, would you do it?

I sort of did. Interestingly, a couple of us did a reunion years ago, and then I think about four years ago, we did a version of it in Costa Mesa. The whole original cast came out and talked about what it was like to be in the show and different things, and then we got to sing our songs again. It was very, very wonderful and interesting to go back to material that is so well-written and so deep after you have lived 29 more years of life. I loved it.

Why didn’t you reprise the role in the live action film?

Nobody asked me! [laughs]. But you know, Meryl Streep is a movie star, and I’m really not, and those are facts.

What did you think of Meryl’s performance?

I love Meryl Streep. She did one thing I really liked in the song “Last Midnight.” She changed it for her, and it made total sense and I thought she was great. She is really great.

Last year, you replaced Bette Midler as Dolly Levi in Hello, Dolly! We sadly lost the iconic Carol Channing in January, so I was wondering, did Carol ever get to see you perform as Dolly?

No, but about four years ago when I was performing in Palm Springs, she was in the audience. I said the great Carol Channing is here and can you believe she’s 95? I heard this voice yell out, 96! I’m looking at a picture I took with her that night right now and she was one of the greatest entertainers. So funny and so full of life, so full of love. She was fantastic.

I am sure you are approached by fans all the time. What is the weirdest thing a fan has ever given you?

Well, not weird, but I did meet one fellow who has my picture tattooed on his arm. He wanted me to sign it, which I did. Then he was going to have that tattooed. Tt’s a great, great compliment basically. I mean, I am floored, just floored.

On a day off, what do you like to do with your time?

Interestingly, I had a cold for the last week, so I watched some movies I have to vote on, that was fun. I never really have the time to hunker down and watch three movies in a day. I was also reading, and I was realizing how much I love Lanford Wilson plays like Talley’s Folly. He is a brilliant playwright.

In addition to performing, you are also well-known for your activism and charity work. Why are LGBTQ rights such an important cause for you?

You know, I think everyone has the right to be who they are. I believe in same-sex marriage because I just think it is so important for young people growing up to realize that they can have a life, they can have a family, they are accepted, and they don’t have to sneak around. I think I believed in same-sex marriage even before some gay people did. They would be like, what? What do you mean? Marriage isn’t for us. So, I think it’s a very interesting thing that makes you really stay non-judgmental and open minded. If a guy wants to have half long hair and half short hair, let him if it makes him feel good. Let people identify themselves how they want. Let them choose how they want to be looked at by the world. What’s wrong with that? Who is it hurting? It is just important for everyone to have a chance for happiness, and that is how I feel.

And you are exactly right. So, what is next for you? Any upcoming projects we should be on the lookout for?

I might be back on The Good Fight on CBS All Access, and then I am doing a lot of concerts. So, if anyone is in London in June, I am doing a tour there. I think that is it so far. I took the rest of the year off last year and traveled which I have never ever, ever done. I never take vacations. I went to Sicily, but then I went to Africa and it was amazing. It was so peaceful there. I went on Safari, and it was kind of like being in Central Park except out comes an elephant and giraffe. You turn the vehicle’s motor off, and you hear nothing. You just see these beautiful creatures walking about. Then I went to Rwanda to see the gorillas, which are so gentle. They only have visitors once a day and they are so curious, especially the babies. I loved it.

Lastly, what would you like to say to your South Florida fans?

Florida is looking better and better and always have tolerance and love for each other.

Perfect. Again, thank you so much for taking the time to chat with me, and we look forward to seeing you in South Florida!

Thank you, it was a pleasure.