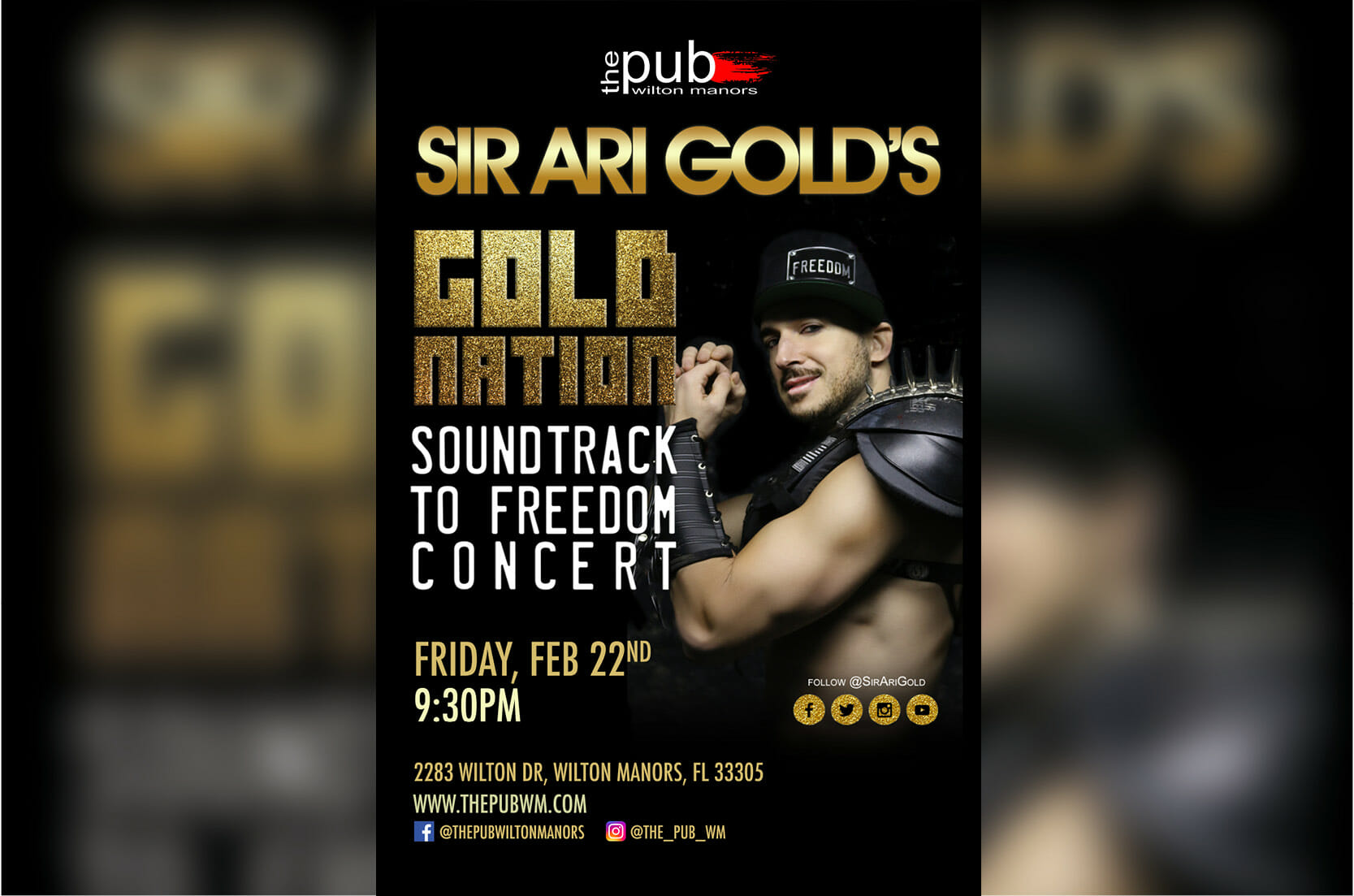 An interview with Sir Ari Gold

Sir Ari Gold has a story to tell, so listen up. Singing and performing since childhood, Gold’s queer breakout moment occurred near the dawn of this century with the release of his award-winning debut album. Working primarily in the dance music realm, Gold had his share of club sensations, and released a handful of albums. His most recent recording is 2015’s Soundtrack to Freedom under the GoldNation banner. Not limiting himself to music, Gold models, does speaking engagements and remains a visible LGBTQ rights activist.

Gregg Shapiro: When I first met you, you were just good old Ari Gold. Now you are Sir Ari Gold. When did the knighting take effect?

Ari Gold: I knelt in front of a drag queen which I think is something every gay boy should do considering it was drag queens that led the Stonewall rebellion! I got knighted by the Imperial Court of New York. It was at the 24th annual Night of a Thousand Gowns in 2010. It’s one of the longest standing human rights events and organizations. I embraced the title because receiving recognition from my own LGBTQ community is always the most meaningful to me. My work has been so much about telling queer stories and being the kind of gay pop star I didn’t have growing up. It also helps with Google searches after HBO stole my name and brand for a character that represents the opposite of what I am about. Life sure is funny!

GS: Are you saying Jeremy Piven’s Entourage character Ari Gold presented professional problems for you when that was show was still on the air?

AG: I actually think the Jeremy Piven character did a lot of damage to my career. I don’t know how it slipped through HBO’s own vetting process for using names for characters when I have been “Ari Gold” in Screen Actors Guild since I was seven years old and had www.AriGold.com since the mid-nineties. I thought about suing them at the time, but I’m just little me and they are HBO. And it’s my birth name that I refused to change even when Desmond Child told me it sounded too Jewish to be a pop star! I was determined to prove that Ari Gold can be a gay Jewish pop star name, not just a stereotypical Jewish agent. We can all see how well that went!

GS: I’ve been covering your music for almost 20 years. In what ways would you say that your songwriting has evolved since the beginning?

AG: I have always poured out my heart and soul in my music. When I first started writing and recording my own music, it was a big deal to take the risk of putting male pronouns in my songs. But as I continued to make albums, I felt it was my responsibility not just to add the gay twist to traditional pop love songs, but to more profoundly describe the specificity of what it’s like for me to live life as a gay man at this time. Transport Systems, my third album, was the first album that I was able to conceive of from beginning to end as a concept album. But my latest album Soundtrack to Freedom was such a fulfilling experience because when I worked in the studio with Bob Sandee we weren’t on the clock. And that allowed for so much exploration, inspiration and experimentation. All five of my studio albums reflect the pain, heartache, joy, passion and love I was going through at that time. I could tell you exactly where, what, when and who about every song I’ve ever written. Hopefully the writing evolves as I do and I can hone in on what I really want to say and how clear and simple can I be in saying it. It’s cool when you can come up with clever or evocative ways of telling a story, but simplicity is the ultimate goal I think.

GS: You’ve been working in the dance music realm for a long time. Do you have an all acoustic or rock album in you?

GS: Your latest album Soundtrack to Freedom finds you recording as Gold Nation. Please say something about the new moniker.

AG: I wanted something that was less about the cult of pop star personality and more inclusive, something that represents all the creative musical and visual collaborators I work with, as well as the audience and “followers” that I interact with. It represents the relationship between artist and audience together. We are one GoldNation under God, whatever the word “god” may mean to you.

GS: The first track, “Opening Score,” contains the line, “Be the change that you want to see.” In what ways are you doing that?

AG: By always trying my best to treat people how I want to be treated — The Golden Rule! By putting light, hope, and love into the world through music, storytelling and performance. By continually working on myself. By staying engaged and mindful about what’s happening in the world with the knowledge that my actions, thoughts and behaviors on a micro personal scale do have an effect on the world at large.

GS: You’ve never shied away from making statements with your music, but “Personal Apocalypse” might be your most overtly political and radical.

AG: Thank you! I was secretly hoping you would notice that song, Gregg! Feminism taught us that the personal is political, which I sing in the song. I was going through some very serious life-threatening and health issues which sparked a spiritual and existential crisis in me and the song came out of all that. It’s about navigating through the darkest of time and collecting all the tools you may need in order to make your way out of it. I was excited to finally release a song in that triplicate rhythm signature I love in so many Bad-era Michael Jackson songs, or in Whitney Houston’s “I’m Your Baby Tonight.” It’s one of my, well, personal favorites! The production and vocals on it had to be super tight but I think it’s a song that could totally work with just piano and vocals, too.

GS: Among your many projects is your musical memoir Pop Out.

AG: Pop Out is the untold story of “America’s First Gay Pop Star,” but it’s also about what happens when communities you seemingly belong to render you invisible and how we as humans are able to pop out of that. I truly cannot wait until the world gets to hear my story as told in this show. I play many characters including my own parents who are hilarious by just being themselves. I’ve been working on it for more than eight years. I did a workshop with New York Theater Workshop with director David Drake and that taught me a lot about what the show was really about and why I have to so urgently tell this story. I’m still working on getting the right kind of theatrical support for it so I can do it the way it needs to be, but the story is finally ready to be told. It’s my own story, so it’s super gay and super Jewish. Fort Lauderdale would be a great place to do a production!

GS: Finally, Ari, please tell me something about yourself that might surprise the readers.

AG: I don’t think it’s all that much of a surprise, but in addition to my @SirAriGold YouTube, Facebook and Instagram accounts, I can also be found on Grindr and Scruff! But I like to start with a little mystery, so don’t ask me for my profile name [laughs]! Seriously though, I wanted to let the readers know how much I get out of hearing from people who have been affected by my work. It makes all the struggles we go through as artists and human beings worth it.