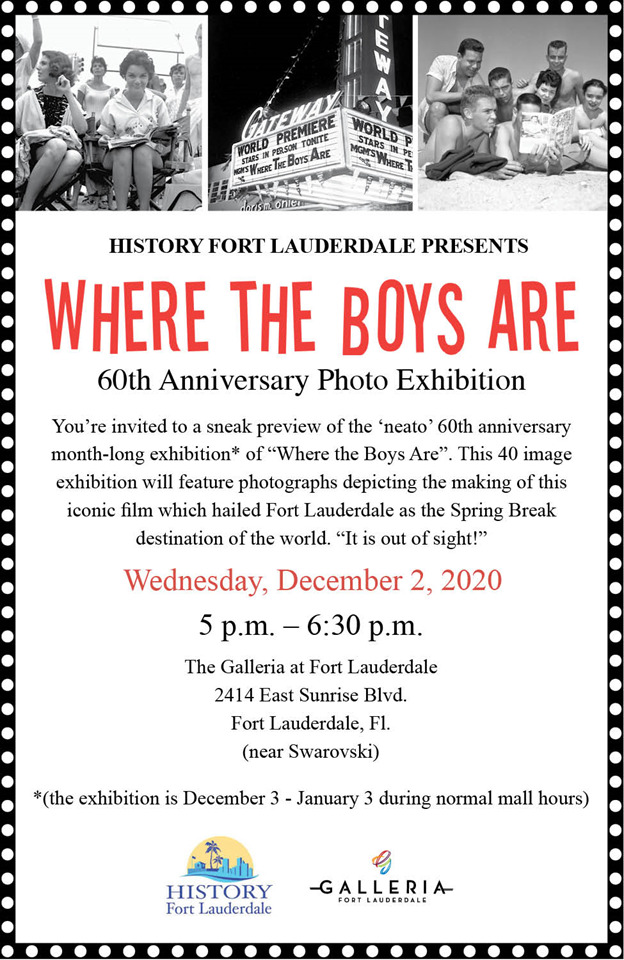 Where The Boys Are

History Fort Lauderdale, proud steward of our community’s past by making our heritage accessible and engaging to residents and visitors, will present, “Where the Boys Are,” an exclusive 60th anniversary film photo exhibition at The Galleria at Fort Lauderdale. Opening on Wednesday, December 3, this free retrospective will feature 40 curated historical and never-before-seen oversized images chronicling the making of and local star-studded premiere (December 21, 1960) of the landmark film that cemented the City of Fort Lauderdale as a worldwide Spring Break destination. The walk-through exhibit will be available for the public to view near Swarovski until January 3, 2021.

“We’re delighted to partner with The Galleria at Fort Lauderdale to celebrate Where the Boys
Are, an iconic film that launched a golden era of global tourism recognition and economic
prosperity,” said Patricia Zeiler, executive director of History Fort Lauderdale. “This exhibit is
special not only because of its timeliness and behind-the-scenes photos, but because it features
many local residents as extras in the film who contributed to making our great city an
extraordinary cultural asset.” 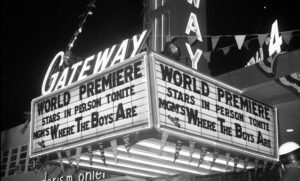 Visitors to The Galleria at Fort Lauderdale will delight in seeing the making of Where the Boys
Are, the 1960 American CinemaScope comedy directed by Henry Levin, via a variety of slice-of-
life and candid on-set images enlarged for detail. These include captures of local resident and
actress Connie Francis (who sang the film’s memorable title theme), as well as stars Dolores
Hart, Paula Prentiss, George Hamilton, Yvette Mimieux, Jim Hutton, and Frank Gorshin. Some
photos were captured on the actual site of The Galleria, then an open-air shopping center called
the Sunrise Center. Many photos feature local South Florida extras and regional film crew who
were called-upon to star and work on the film. 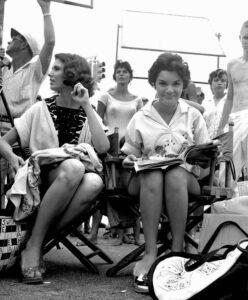 In compliance with local and state health guidelines, visitors to History Fort Lauderdale’s “Where
the Boys Are” 60th anniversary exhibition at The Galleria, will be required to wear a mask and
practice safe social distancing of six feet apart.

The event is finished.