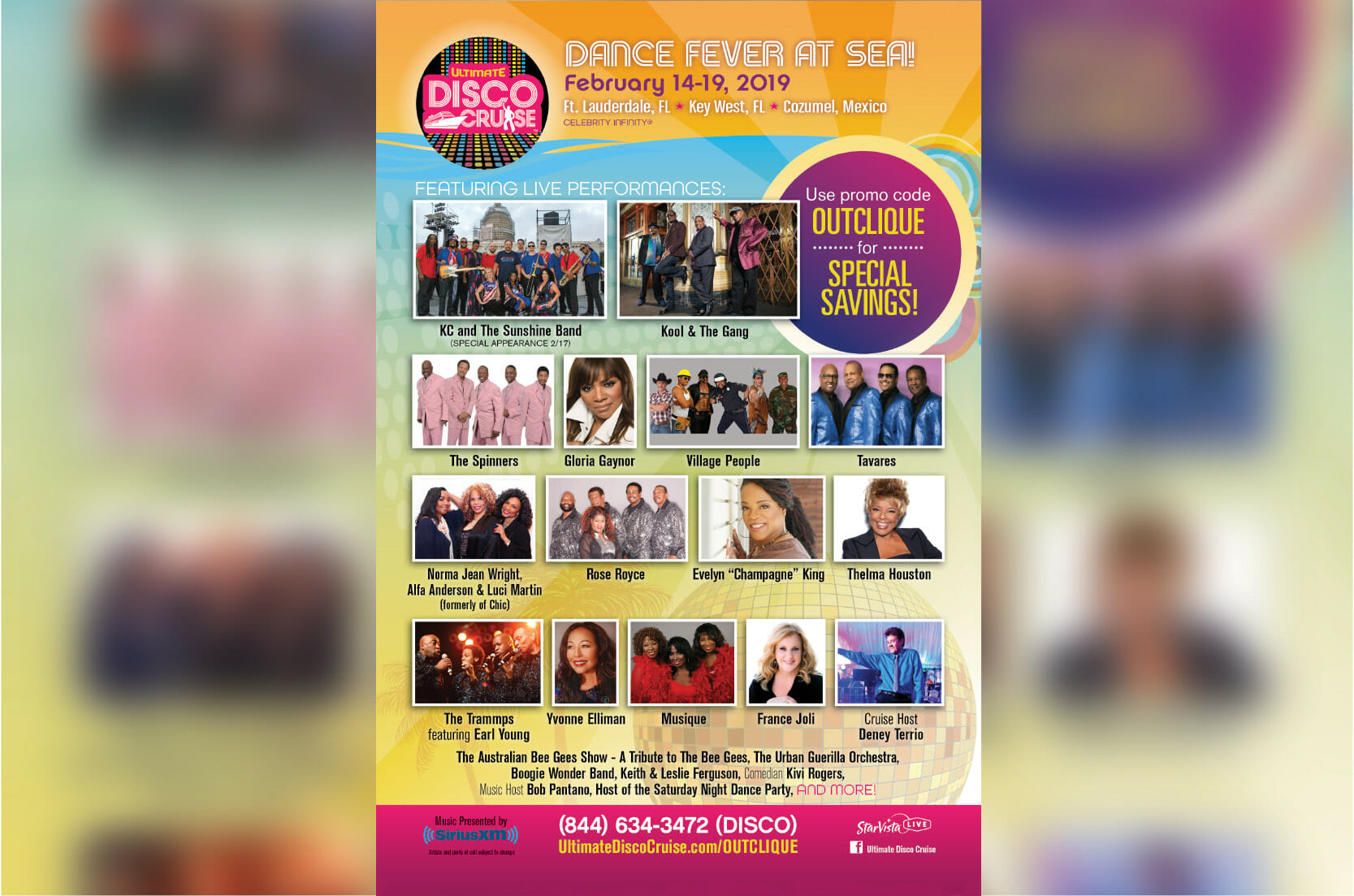 An interview with Thelma Houston

It’s 1976. Before Donna Summer felt love and Evelyn “Champagne” King felt shame. Before the Bee Gees got night fever and were staying alive. Before Sylvester felt mighty real, the Village People checked in to the YMCA, and Gloria Gaynor survived, Thelma Houston had one simple musical request, “Don’t Leave Me This Way.” Ahead of the disco curve by a good year, Thelma Houston led the pack with her impeccably produced hit single, a song that sounds as fresh more than 40 years later as it did the first time we heard it. Houston, who has a long history of love and support for the LGBTQ community, is one of the dance music legends performing on the Ultimate Disco Cruise (www.UltimateDiscoCruise.com), February 14-19, 2019. She was kind enough to answer a few questions before the cruise.

Gregg Shapiro: Thelma, you are one of the legendary artists performing on the inaugural Ultimate Disco Cruise in mid-February 2019. What does it mean to you to be performing on that cruise?

Thelma Houston: What does it mean? It means, Thank you, Jesus! I can work [laughs]! Of course it means that! I just did a show about two weeks ago at the Westbury (Music Fair in NY) and some of the same people that are going to be on the cruise were in the show. It was called “Saturday Night Disco Fever.” I’m telling you, it was like old home week. At some point, all of us, The Trammps, Evelyn (King), Peaches & Herb, people like that, over the years, we’ve all appeared on shows together. It was so much fun, being with each other, watching each other’s soundchecks, hanging out backstage and catching up. It means a lot to me to be doing this. But more importantly, what it means to me is that something we created, the music, many years ago is still valuable enough that people still want to see us. That we can still be doing our work; that’s a blessing. I feel very fortunate and I’m thrilled to be doing this.

GS: Are there people among those you named that you’ve maintained contact with over the years or do you just reconnect at the kind of show you mentioned?

TH: We do kind of keep in touch. Even though we might not see each other a lot. We do a lot of shows throughout the year where we will run into each other. Some of us (like Gloria [Gaynor] and I) we talk and see each other and correspond. We still like each other!

GS: What can fans expect from your set on the cruise?

TH: I’m going to keep them moving, keep them up, keep them dancing and keep them going. I’m working out every day so that I’ll have the energy to do that [laughs].

GS: Will you be performing any new songs in the set, and if so, does that mean that there is a new Thelma Houston album in the works?

TH: I have an EP that I’m working on. It isn’t necessarily all dance music. But there are a couple of songs that hopefully will be the kind that people want to dance to. What I realized, and what I’m happy to know, is that people still want to dance. They really do. I’m finding that in my audiences, when I do the casino dates, I had grandparents, parents, and their children. It was amazing. When I went out there, I would think, “Who is my audience going to be?” They were up whooping and hollering and dancing. It was a wonderful experience. You see that when you’re doing the outdoor summer festivals because people will bring their kids. But this was indoors, seated, winter time. It was great! [They’d say,] “Thelma, can you take a picture with my grandmother? Me and my grandmother?” Of course! That, too, is a blessing.

GS: Are you a seasoned cruiser or do you prefer to be on land?

TH: I don’t mind. I have fun doing it. My first cruising experience was back in the day on an RSVP Cruise. I did the Soul Train cruise three years ago. Now, I’m doing the disco cruise. Hopefully, when it’s my time to perform we’re not on rough waters [laughs].

GS: Be sure to wear flats and not heels.

GS: Your signature tune “Don’t Leave Me This Way,” is one of the best examples of musical cross-pollination. It was written by the legendary songwriting team of Gamble & Huff and was first recorded by Philadelphia International artists Harold Melvin and the Blue Notes who had a minor hit with it. Then came your Tamla Records mega-smash, which was later featured in the Diane Keaton movie Looking for Mr. Goodbar. How is it that you came to record the tune?

TH: I was at a recent awards show where Suzanne de Passe [of Motown] was being given an icon award. I performed the song there. When she got up to accept the award, she told the story of how it really happened. She was driving to work from Malibu and she heard the song. She pulled over immediately to call me. She thought it could be a smash hit. Of course, back then, there were no cell phones, so she had to pull over and go to a payphone and call. All I know, from my side, is that I got a call telling me to go out and get the album and listen to it and tell her what I thought. Hal Davis, who had worked with the Jackson 5, and Suzanne got together and they came up with that signature sound for the song. It was put together to be a disco hit.

GS: Did you ever get to meet the late Teddy Pendergrass, the lead singer of Harold Melvin and the Blue Notes?

TH: Oh, yeah! I worked with Teddy. One of my biggest tours was with Teddy Pendergrass. I knew Teddy when he was a drummer for Harold Melvin and the Blue Notes. He was fine and cute and all the girls liked him [laughs]. Everybody had a crush on Teddy, even before he became the lead singer.

GS: The song took on new meaning during the early days of the AIDS crisis and came full-circle when it was covered by gay band The Communards, led by Jimmy Somerville. Are you familiar with their rendition and, if so, do you remember how you felt when you first heard it?

TH: Let me tell you a funny story. I think we were in Switzerland. I had a performance the next day. The Communards were performing and I went to see them. His manager knew that I was there. When Jimmy started singing “Don’t Leave Me This Way,” they gave me a microphone. I got up and started walking and singing and he was like [squeals]. We’ve met several times. The first time we met I think we were both doing the Pride parade in either New York or San Francisco. It was so funny because I was singing my version of “Don’t Leave Me This Way” and then they were doing their version. The crowd loved them both! That, to me, just goes to show what can happen when you have a good song. It can be interpreted in different ways and the song can stand on its own.

GS: There is a long history of mutual love, affection, respect and admiration between you and the LGBTQ community, including your fantastic performances at different Pride festivals. What does your LGBTQ fanbase mean to you?

TH: It means a lot. Before I recorded “Don’t Leave Me This Way” I had a lot of support. My family was in Long Beach and I moved up to L.A. to be closer to the recording studio and what I had to do up here. My fans and my friends, were my hairdresser, my dressmaker, my make-up people. These were my support. We used to hang out a lot and go dancing at Catch One and all of that. Then, this terrible thing came along that was taking away our friends. We didn’t know what was going on. At that point we were doing what we could to help our friends who were sick. If somebody needed a little help with finances or somebody needed their dog walked, we did what we could, especially as things started getting organized. I’ve been there for all of that. In return, after the Disco Demolition in Chicago and disco started to get bad press and the major agencies no longer had a dance department, and I didn’t have a large R&B base, even though “Don’t Leave Me This Way” crossed over, when that backlash came and I couldn’t get work at other places, [the gay] community would hire me. I had work. I was blessed to work continually. There was a mutual love and respect because they supported me and I supported them.

GS: I got a little choked up just then. That’s very powerful.

TH: Well, that’s the truth. That’s where that comes from. It’s everlasting!