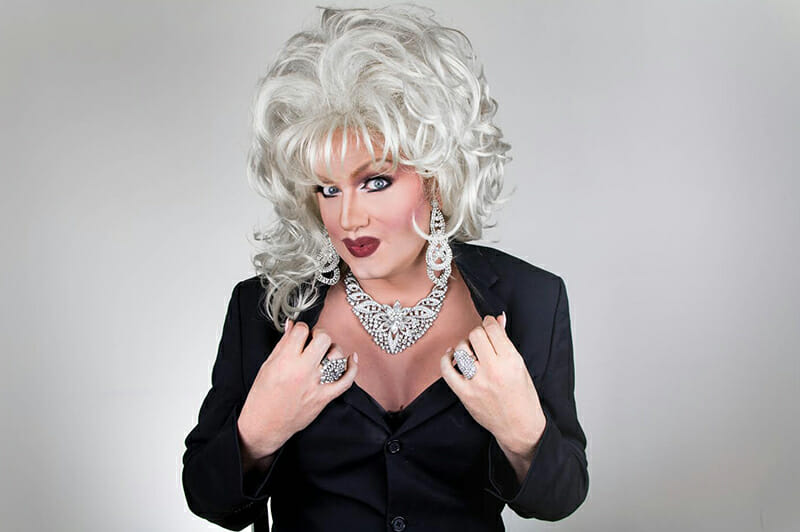 Known as a “Queen of all Trades,” Delighted Tobehere is not your ordinary drag queen. She combines celebrity illusions, vocal impressions, live vocals, lip sync, comedy, intelligence, and quick wit that will leave audiences begging for more. Hailing from the Carolinas, her southern upbringing and charm makes everyone feel comfortable and welcomed. Her entertainment career began in February 2001 when she performed alongside The Amorettes, “The Infamous Camp Drag Queens of the South.” In addition to performing across the world, Delighted has been a guest speaker at multiple university lectures and seminars, and even appeared on NBC’s America’s Got Talent. Without a doubt, all four judges said, “yes.” I was delighted to talk more with Delighted about her upcoming shows and received the opportunity to learn more about who this comedy queen is exactly.

First off, tell me who Delighted Tobehere is. What is she all about?

Delighted is a southern live singing comedy queen based out of New York City. She’s uplifting, smart, silly, witty, and approachable. The name Delighted Tobehere is a reminder to live in the moment, live your best life, love yourself, and love each other. My character and shows are built on that foundation. Bottom line? She’s fun, funny, and friendly!

How did you obtain the name, Delighted Tobehere?

“What’s in a name?” so the saying goes. The answer? A lot! My original drag name was Roxy C. Moorecox, which served me well in the nightlife scene for 14 years. But that name was a bit too blue for my future aspirations, so a rebranding took place – a mid-drag crisis if you will. A dear friend and I were brainstorming about the new name and he asked me what I wanted my audience to feel at my shows. I answered, “happy.” So, we pulled out a thesaurus and I started reading the synonyms for “happy” aloud. I stopped at ‘delighted’ and thought, “What if my name was Delighted Tobehere?” Unphased, my friend asked, “How would you introduce yourself?” I said, “Hello, I’m Delighted Tobehere.” The rest is history.

Tell me about your upcoming show at The Pub in Wilton Manors. What can audiences expect?

Shows, my friend, shows! I’m bringing two completely different shows for Friday and Sunday nights. Friday will be “Delighted with a D!” It’s my drag variety show filled with live singing, comedy, audience participation, and all-around madcap antics. Sunday night will be my new flagship show, “DRAG 101,” which is a hilarious, live singing A to Z crash course in all things drag. I bring the dressing room to the stage in this theatrical show showing you just what it really takes to be a Queen! It’s the perfect show for someone who has seen a thousand drag shows or none. Everything happens right before your eyes, yes, even that.

How long have you been doing drag, and what first got you into it?

In February, I will celebrate 18 years of drag. She’ll be able to vote. Luckily, I’ve been able to vote for a while now, and I hope everyone reading this votes too! I did my first talent show at Backstreet Atlanta with The Armorettes, “The Infamous Camp Drag Queens of the South.” A troupe of queens that has raised over $2 million for folks living with HIV/AIDS. I remember being a young gay man watching these hairy and hilarious men frolic around on stage, making people laugh and raising money. I was already a performing arts major at Clemson University and connected the similarities between drag and acting and easily jumped at the new opportunity to be on stage. I performed Reba’s “Why Haven’t I Heard From You” to a framed picture of Bill Clinton dressed as Monica Lewinsky. I didn’t win, but the bug bit, and the rest, as they say, is herstory.

What would you say is your favorite part about drag and performing?

I love making people laugh, and making people think. One minute I can be impersonating Paul Lynde (Millennial’s do your homework) and the next I’ll be talking about football and then watch the audience collectively say in their brain, “How does this drag queen know so much about tight ends?” (Answer: most of us queens are tops.) Laughter is healing, and also breaks down walls. What better usage of laughter than to break down some stereotypes within our own community while we’re at it? #MascForMascara

You have been named one of the funniest drag queens in America by the Huffington Post and many other publications. Have you always had the knack for comedy?

I give major props to my family for my sense of humor. I was raised in a house that cherished laughter. My maternal grandmother was a hair stylist in South Carolina, and I learned what stage presence was in that beauty shop. She was the consummate performer, entertaining her customers with gossip, a clever wit, and a touch of class. Basically, I had Truvy from Steel Magnolias for a grandmother. It was pretty fabulous!

How do you stand out from other comedy queens?

Primarily because I’m 7’ tall in heels and hair. To stand out, I just have to stand up! I’m also not particularly blue with my humor. My comedic skills allow me to have a spectrum from G to XXX, but my favorite part of comedy is walking someone right up to the line and letting them leap. It’s so much fun to think that you can read back a transcript of some of my shows and I never said a naughty thing, but it could have been the most entertainingly suggestive show out there. Dropping the F-bomb every other word to get a response is a crutch. I love the fun and the challenge of seeing what I can get away with without those words. Think of it as Catchphrase for comedy.

Did you ever think drag performance would end up being a full-time career for you?

Back when I started, and the legends that came before my generation, I don’t think any of us thought of drag being a career. Maybe you could be a star of a club on Saturday night, but not make a full time living from it. Times have changed. Now, there are folks that watch TV and their initial concept of drag is a means to stardom. It’s great to know that drag can provide someone a livable income, or even great wealth, but that’s still the exception. I suggest doing drag for the fun of it and focus on your craft. The demand from your audience and show directors will tell you when to move from hobbyist to part-timer to full-timer. I am grateful and thankful to the fans and venues that have believed in me and supported me through the years. I couldn’t do it without them.

In 2015, you debuted on NBC’s America’s Got Talent. What was that whole experience like?

It was simply magical. I never auditioned. I was simply found at a drag brunch in L.A. Next thing I know I’m being whisked away to L.A., I was living in Charlotte, North Carolina at the time, and my very first experience with AGT was walking on the stage at the Dolby Theater, where they film the Academy Awards, and performing in front of 3,500 people and the celebrity judges for the filming. The judges were very kind, the crew was a blast to work with, and it was just such a great experience to see the behind the scenes workings of the machine that is AGT. It takes a lot of folks to make that show happen and it was fun to watch and to get to be a part of it! So sure, after getting four “yes” votes I didn’t move forward, I magically disappeared, but when you think about it, it’s kind of the best outcome. Nowhere on YouTube is there video of the judges voting me off! Just compliments and the validation of successfully being on network television. I loved the experience and mark it as one of the major highlights of my career.

Have you ever auditioned for RuPaul’s Drag Race? If not, do you have any desire to?

I have never auditioned, and I don’t plan to in the future. It’s just not the path I want to take with my career, but I will continue to cheer on my sisters on the show!

I see you do killer Adele and Reba impersonations. Are those your go to, or do you impersonate other celebrities?

Thank you! Celebrity impersonation is a personal passion and joy. I love perfecting an illusion, the elusive brass ring, but I equally love the journey. You don’t have to be spot on to enjoy the performance. In fact, the look is almost secondary to the embodiment of the star. Seeing the spark of that star’s light in the queen’s eye while they are performing is even more magical than a perfect costume. It is a true art and I love it. Adele is likely my most complete illusion, Reba coming in second. I also diddle with Stevie Nicks, Judy, Liza, Dolly, and even Bob Ross!

You have traveled across the nation, even the world, performing. Do you have a dream performance you have not yet accomplished?

The Atlanta Legend, Lily White, was asked what kind of audience was her favorite. She answered, “The ones facing the front.” She got it. An entertainer entertains. Period. I hope to perform the rest of my life and I have many dreams: more TV, Broadway, Carnegie Hall (practice, practice, practice), and more I haven’t come up with yet!

Are your family and friends supportive of your passion?

Friends? Absolutely. From [rhinestoning] gowns to promotions to endless trips to the airport, my friends have stepped up to the plate. They are the proverbial wind beneath my wings. My family, on the other hand, has been a unique and complex journey. One of unending love, but with religious reservations. We have a great relationship outside of all things gay. I did my part, I came out, and now they are on their own path to hopefully accept me as I accept myself. I keep the lines of communication open and the love flowing and take things one day at a time.

What’s next for Delighted Tobehere?

Imagine a fabulous restaurant with a one-page menu. I have great shows on the menu: DRAG 101, Delighted with a D!, DIVARIETY, a celebrity illusion and comedy show with my sister Gigi Monroe, and my new country show coming to my residency in Puerto Vallarta this winter named SHE HAW. I will intersperse those with special events and fundraisers, while working on my dreams in the background. I am so excited to see what happens next in my career, and the best way to find what’s happening next is to check out my website, www.ImDelightedTobehere.com, and follow me via social media @QueenDelighted on Facebook, Instagram, and Twitter!