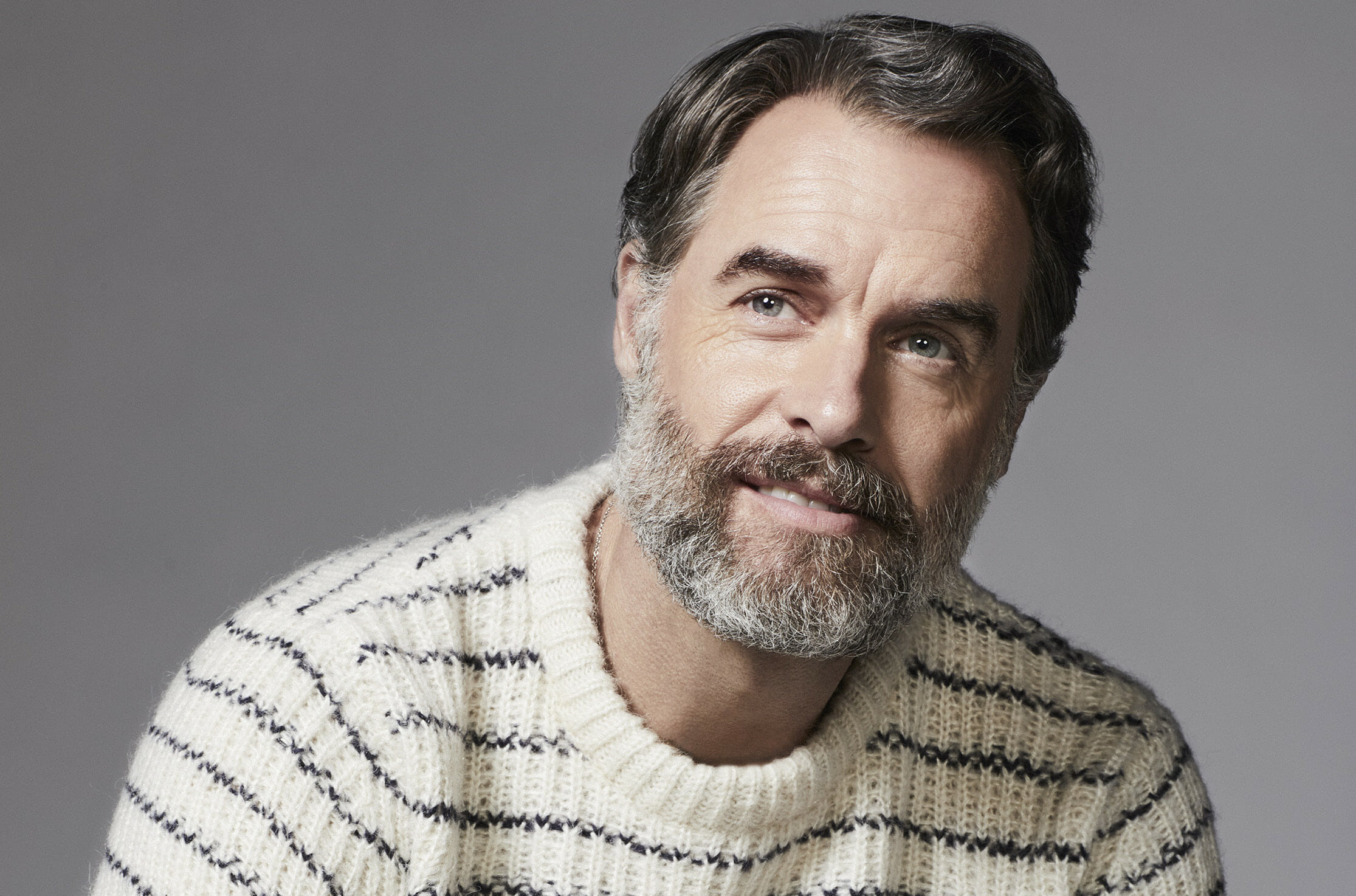 An interview with Murray Bartlett of Tales of the City

A recent internet meme featured Harry Potter series author J.K. Rowling bemoaning the difficulty of killing off so many characters with Game of Thrones series author George R.R. Martin calling her “adorable” in response. Gay writer Armistead Maupin has more in common with Rowling and Martin than you might expect. Maupin, like Rowling and Martin, is the author of a popular book series.

In Maupin’s case, it’s the beloved queer Tales of The City sequence, which began in 1978 and concluded in 2014. As in the case of Rowling and Martin, Maupin populated his books with a wide assortment of characters, some loveable and some despicable. Also, over the years, Maupin has killed off characters, a creative quality that he shares with Rowling and Martin. Last, but not least, the Tales of the City books, like those of Rowling’s and Martin’s, have made the leap from the page to the screen. In 1993, PBS presented the launch of the Tales of the City series starring Olympia Dukakis as Anna Madrigal, the legendary trans landlord of 28 Barbary Lane, and Laura Linney as Mary Ann Singleton, the naïve young woman from Ohio who was forever changed when she relocated to San Francisco.

While the groundbreaking series was well-received by critics and fans of the books, boosting both Linney and Dukakis’ careers, the raciness of the material didn’t sit well with conservatives controlling the PBS purse-strings. More Tales of the City and Further Tales of the City aired on Showtime in 1998 and 2001, respectively, with Linney and Dukakis among the few actors reprising their roles. In June of 2019, Netflix presents the return of the series, also starring Linney and Dukakis, which opens with the occasion of Anna’s 90th birthday and brings characters, old and new, together once again. Handsome, out, Australian actor Murray Bartlett is the third actor to assume the role of Michael “Mouse” Tolliver, and he is sensational in the role. He effortlessly brings everything we’ve ever loved about Michael to life in the most vivid and honest way. I spoke with him shortly before the June series debut.

Gregg Shapiro: Murray, what was it about the character of Michael “Mouse” Tolliver in Tales of The City that made you want to portray him?

Murray Bartlett: I love the Tales of the City books. I have a huge affection for all of the characters, including Michael, from the `90s. I guess what I love about him, particularly now, is that he has been through a lot. He went through the AIDS crisis and thought he was going to die and lost a lot of the people that he loved. He faced his own mortality. He went through a hugely challenging and transformative time and he’s managed to keep this beautiful kind of buoyant spirit that he has, this boyish spirit. I really love that about him. It’s difficult to do that. I think a lot of people become cynical and jaded. He’s definitely come through a little damaged [laughs] and he’s definitely got some baggage but that buoyant spirit is still intact, and I really love that.

GS: What does being part of such a beloved series, including both the previous TV productions on PBS and Showtime, mean to you?

MB: It’s been beloved to me [laughs]. I have such a personal connection to it. I think for many of us that saw it in the beginning, or came to the books in the `70s,  `80s, `90s and beyond, is that they really struck a chord that wasn’t being struck. These LGBTQ characters finding family and living a wonderful, joyful life, with all the trials and tribulations of their everyday lives. Fully fleshed out, real characters that were experiencing joy and pain. A trans character, like Anna Madrigal, that was not a tragic figure. She’s a wise, benevolent, compassionate, wonderful inspiring woman. I think it was groundbreaking at the time, and I think it’s still groundbreaking in that we’re still kind of at the beginning of LGBTQ representation on television and on film. Being part of that wave and being part of this beautiful world that Armistead created that is so compassionate and human and full of love; I feel like we need more of that in the world always, and especially now. It feels like such a privilege to be part of that.

GS: Did you have an opportunity to meet and talk with Armistead during the Netflix production?

MB: Yes, absolutely! I had done this show, Looking, for HBO a few years ago and we were shooting in San Francisco. Tales of the City was very much a kind of mascot. The first night we arrived, me and a few of the other actors watched (the earlier version of) Tales of the City. We met up with Armistead a few times. He became like our godfather. He was very sweet and generous. I had a little bit of a connection with him. He came and spent time with us on set (while making the new Tales of the City). He’s the spirit of his books. He’s the personification of that. A beautiful, compassionate, wonderful man. It was great for all of us to have him on set at times.

GS: What were the challenges and rewards of stepping into the role of Michael aka “Mouse”, a role played by two other actors in previous iterations of the series?

MB: I didn’t really think about that too much. Before we started, I went back and read all of the books. I tried to let Mouse jump off the page. Let Armistead give me Mouse through the books [laughs]. I think maybe one of the reasons I didn’t give it much thought is that two decades have gone in between. A lot has happened. Mouse still has the same spirit, he’s still essentially the same guy, but he’s transformed in terms of all the stuff he’s gone through. I felt like, as happens after a couple of decades, you are a kind of reformed character in a lot of ways. I felt like I didn’t have to be too concerned about what had come before and just go back to the books and get the essence of him and run with it.

GS: What was it like to work with Laura Linney and Olympia Dukakis?

MB: Just, you know, magical [laughs]. Complete joy and very surreal. Especially initially, because, I think I’d seen Olympia in things before, particularly Moonstruck. But I don’t think I’d seen Laura before I watched Tales of the City. I have a strong association with those women and those characters in Tales of the City, so it was very surreal being onset the first few times with them. They are those characters to me. I was a little nervous because I admire them so much and they’re such fantastic actors. You want to bring your best. So, there’s a little bit of nerves that come with that. But they’re so gracious and so lovely. There was something about the fact that they are those characters to me, and because they are such great actresses, the scene starts and you just go for the ride. They’re so wonderful to work with and those strong associations of those characters just kicked in for me.

GS: In the new version of Tales of the City, Michael is in a relationship with Ben (Charlie Barnett), a man much younger that he is. This aspect of their relationship comes up repeatedly, but never more than during the scene at the dinner party thrown by Michael’s ex Harrison (Matthew Risch), where Ben is given a gay history lesson. As a gay man yourself, how did that scene make you feel?

MB: I haven’t seen the show yet, but I love that episode. I think it’s so beautifully written, mostly because it doesn’t a present a good and bad. It throws out the two perspectives of the older and younger generation, and it does such a beautiful job of not letting you take sides. You agree and disagree with both [laughs]. I think that that is a beautiful way to approach a fiery issue and conversation. To show both perspectives and let people make up their own minds. It also shows how complex it is. I feel like I understand where the older generation comes from, but I also understand where the younger generation comes from. They both have really good points and they both need to listen to each other because they have a lot to learn from each other. All the stuff that the older generation went through was epic. It’s very important for younger queer people to understand what has come before. The older perspective comes from a place that is worth understanding. Likewise, the younger generation. We’re moving forward in terms of gender identity and second gender identity and sexual identity and how we can express ourselves. Riding a wave into, hopefully, more openness. That has enormous value. We’re at a very delicate stage of navigating through that and we need to be very sensitive. The older generation, at least in that episode, can tend to gloss over that a little bit. I love the way the writer and our team did such a beautiful job of straddling those two perspectives, allowing you to see both of them without telling you what to think about it

GS: You mentioned the HBO series Looking in which you played Dom, which like Tales of the City, was also set in San Francisco. Can you please say something about that city means to you?

MB: I adore San Francisco. I came to San Francisco from Australia for the first time in the `90s for a visit. I think it was 1994. The guy I was staying with had the first season of Tales of the City on VHS [laughs] and he let me watch them. I fell in love with it. But it was completely intertwined with my initial impressions of San Francisco. I recognized a lot of the elements of Tales of the City in San Francisco in terms of community and the sense of family and a sense of belonging. A place where people could come and find those things. Apart from the fact that it’s just a gorgeous city [laughs]. I was there recently and everywhere you turn there’s a beautiful view. There’s something about the spirit of San Francisco. This latest iteration of Tales of the City addresses this new generation of the techie wave coming in. One of the beautiful things about San Francisco that I loved is this incredible diversity of expression, all these wonderful characters and people. But a lot of those people aren’t millionaires [laughs] and they can’t afford to live there anymore. It’s this interesting thing that San Francisco is going through now. How much of the old spirit can stay alive in this new, expensive phase.

GS: In Tales of the City, Michael had Mary Ann, and in Looking, Dom had Doris. Do you have a female best friend like Mary Ann or Doris in your life?

MB: I have several. Yes, absolutely!