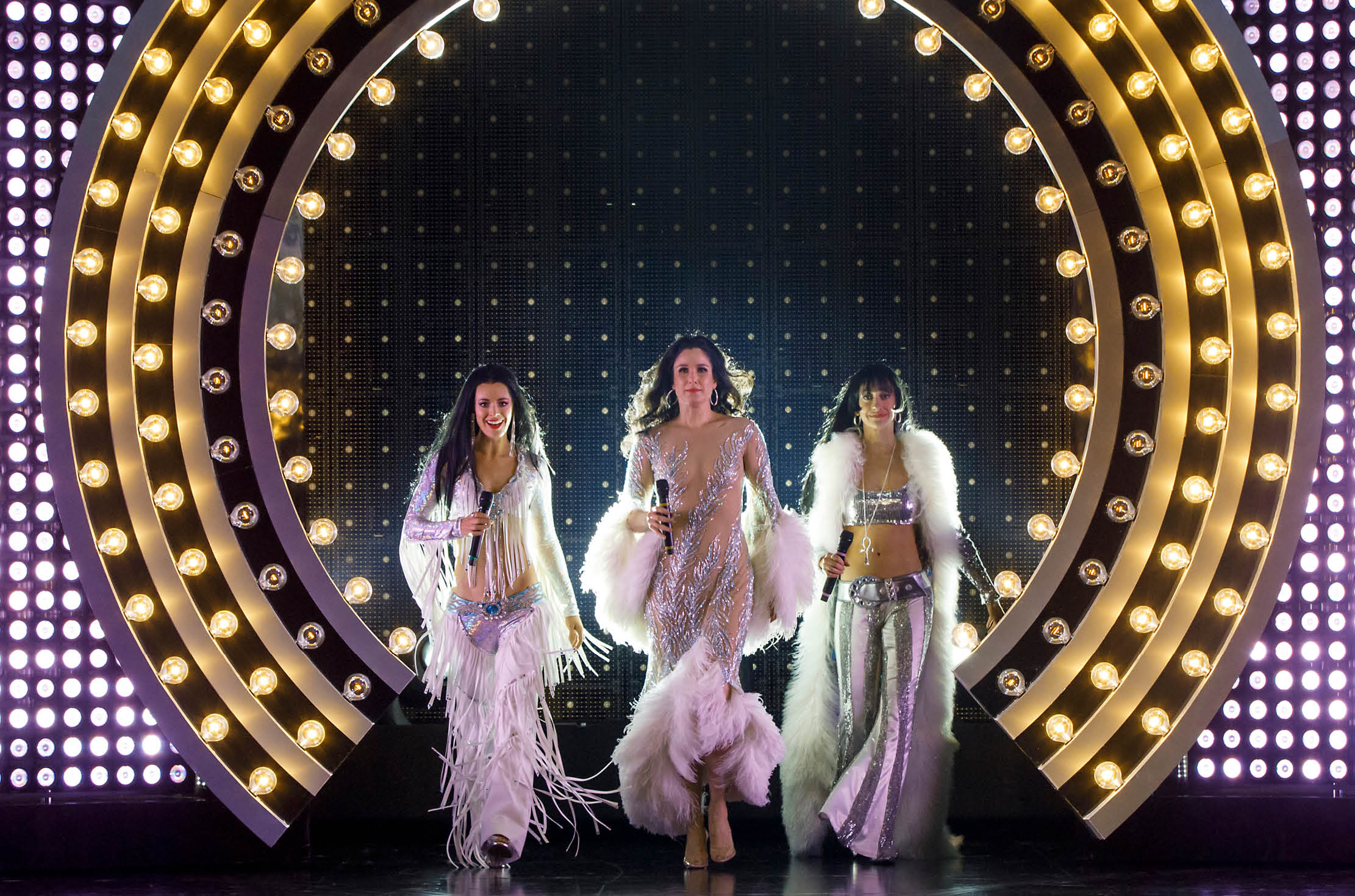 An Interview with Stephanie J. Block

Every theater queen worth their weight in Tony Awards knows the story. Before it premiered on Broadway it was Stephanie J. Block who first read the part of Elphaba in Stephen Schwartz’s musical phenomenon Wicked, although she was later replaced by Idina Menzel. Not one to sit idle, Block went on to play Liza Minnelli alongside Hugh Jackman as Peter Allen in The Boy From Oz. Additionally, Block finally got the chance to inhabit the role of Elphaba in the first national tour of Wicked. Many other Broadway musicals followed including 9 to 5: The Musical (2008), Falsettos (2016) and most recently The Cher Show (2018). Fans of the TV show Madam Secretary will also recognize Block from her portrayal of Abby Whitman. As sweet and kind as she is talented, Block was gracious enough to answer a few questions before her February 22, 2020 concert at Parker Playhouse in Fort Lauderdale.

Gregg Shapiro: Stephanie, December 2019 was a rough month for Broadway with the losses of Jerry Herman (Hello, Dolly!, Mame, La Cage Aux Folles and others) and Allee Willis (who wrote the music and lyrics for The Color Purple). If you could be in a revival of a Jerry Herman musical which one would it be and why?

Stephanie J. Block: Mame! And I say this without hesitation. It is long overdue that this show be revived. The music, the quirkiness and complexity of characters, the celebration of it all… it’s time. Mame is a salve, a jolt of goodness and humor. And in this current world climate, I think we all can admit to wanting more goodness and humor. And I can admit to wanting to embody the role and the energy of Auntie Mame Dennis.

GS: In recent years, you played Cher in The Cher Show and Liza Minnelli in The Boy From Oz. Can you please say something about the challenges and rewards of playing real, living people?

SJB: I can say A LOT about the challenges and rewards of playing a living icon on the stage. It is an entirely different playing field than creating a fictional character from the ground up.  Actors are taught to start from the inward — understanding the mental and emotional space of a character first and then letting that expand to form a three-dimensional character/person. But when “bringing to life” a living icon, an actor must master the outward appearance and characteristics of the person. Walk, speech, mannerisms, etc. It is essential in order for the audience to move past the outward, suspend disbelief (and doubts) and, hopefully, allow the story and the character’s emotional arc to take hold. This is not an easy task as most audience members will inevitably be walking into the theatre with their own personal attachment and/or memory of the “character” I am trying to bring to life. It is a difficult and delicate balance because you want to honor the icon, honor the story you are telling and honor the audience. If that trifecta is achieved — magic!

GS: You worked with Dolly Parton on the stage musical adaptation of 9 to 5: The Musical. What was that experience like for you?

SJB: Dolly Parton is everything you want her to be — Southern drawl, a warm smile, sparkles, nails, hair – but she is also so much more than that. She is smart and can rewrite a lyric or a melody on the spot. She’ll grab any random piece of paper available to her (a napkin, paper plate, etc.) and start jotting down rewrites without debate or excuses. She makes chocolate peanut butter fudge to perfection in a microwave. She is gracious and respectful of everyone she encounters, and she puts up with no bullshit, so everyone is their best self when she is around. I wish I could carry her around in my pocket every day. She is a beautiful reminder as to how life should be lived. Also, she and my daughter share the same birthday, January 19th. Dolly likes to take credit for that (laughs).

GS: It sounds like it was a good experience, after all Dolly joined you for a duet on her song “I Will Always Love You” on your 2009 album The Place I Know (PS Classics). What was that like?

SJB: I will never forget the day Dolly came in to record with/for me. I was so hesitant to ask her to join me on my album. I didn’t want her to think that our Broadway collaboration with 9 to 5: The Musical and recent friendship had any ulterior motives. But she was gracious and more than open to the idea as it was she who mentioned we should sing “I Will Always Love You” as a duet. A love song from one generation to the other, of sorts. This song has been a part of her for decades and yet, that day in the studio, she was able to still play and find fresh harmonies and interpretations. Everyone in the studio was overwhelmed by her presence and just wanted to just be in her airspace.

GS: Are there plans for a new album in the works?

SJB: I have a few really specific ideas for albums and hope all three will be in production at some time or another. I think my next album will most likely be a Christmas album.

GS: You are performing at Parker Playhouse in Fort Lauderdale on February 22. What can fans expect from your show?

SJB: Well, anytime you share the stage with Seth Rudetsky you never know what to expect [laughs]. That is the joy of it all. Of course, we prepare and rehearse, but he thrives on “in the moment.” It’s always an incredible adrenaline ride with him. Seth has Broadway knowledge, anecdotes and stories and that leads to personal stories, which leads to who knows where [laughs]. Ahhh, live theatre at it’s best. That’s what fans can “expect” on February 22.

GS: Some of the shows in which you’ve performed on Broadway, including Falsettos, The Cher Show and The Boy From Oz have an increased appeal for the LGBTQ+ community simply due to their subject matter. Are you aware of a following within the LGBTQ+ community, and if so, what does it mean to you?

SJB: Why does this question have me immediately in tears?  The only way I can answer this is that, although I am not gay, I feel as though I am “a part” of the LGBTQ+ community. Let me explain. I cannot look back on my life without seeing, holding hands with, being supported by, being lifted up by them. This community has been by my side quite literally standing by my side at my wedding, caring for me when I was sick or injured, waiting for hours in a hospital room for the birth of my daughter. They are my best friends, my neighbors, my brothers and sisters in faith. This community is helping me raise my daughter in love and acceptance and joy. And, in turn, I will always try to lift up, advocate for and celebrate the LGBTQ+. Isn’t that what community is all about?

GS: Now I’m all choked up! On the TV show Madam Secretary, your character Abby and her husband Jay, went through a divorce. You and Sebastian Arcelus, the actor playing Jay, are married in real life. What was it like for you to go through that kind of emotional storyline?

SJB: Being on Sebastian’s set at Madam Secretary was very special. I felt pressure to be great as I didn’t want to disappoint him or have any whispers that I wasn’t there based on merit. We would run our lines in the car driving to the studio. He would give me hints as to what would work best on camera. And, yes, the episodes we shared were very heavy and emotional, but it never affected me in a way that I couldn’t bounce back after every take. I would jump at the opportunity to be able to work as Seb’s costar again, anytime.

GS: One more Madam Secretary question – in addition to you, the cast is filled with Broadway musical stars including Bebe Neuwirth, Erich Bergen, Clifton Davis, Sara Ramirez, Patina Miller, Keith Carradine, and Tonya Pinkins, to name a few.  How often did cast members burst into song?

SJB: It was very rare that anyone would just burst out into song (unless scripted otherwise). The social media app “Marco Polo” was the activity and past time of choice. And those little videos were hilarious and would sometimes involve spontaneous singing/songwriting.

GS: Are there any upcoming projects – stage, film, or TV – that you’d like to mention?

SJB: By the time this article prints, I think a press release will be out announcing my next theatrical project. It is going to be a doozy. Great fun and a great challenge. Aren’t those the best kind?

Stephanie will be at the February 22, 2020 Parker Playhouse in Fort Lauderdale. For more information and to purchase tickets to see “Stephanie J. Block with Seth Rudetsky,” visit www.ParkerPlayhouse.com.

More Than Just a Memory

Affair of the Heart