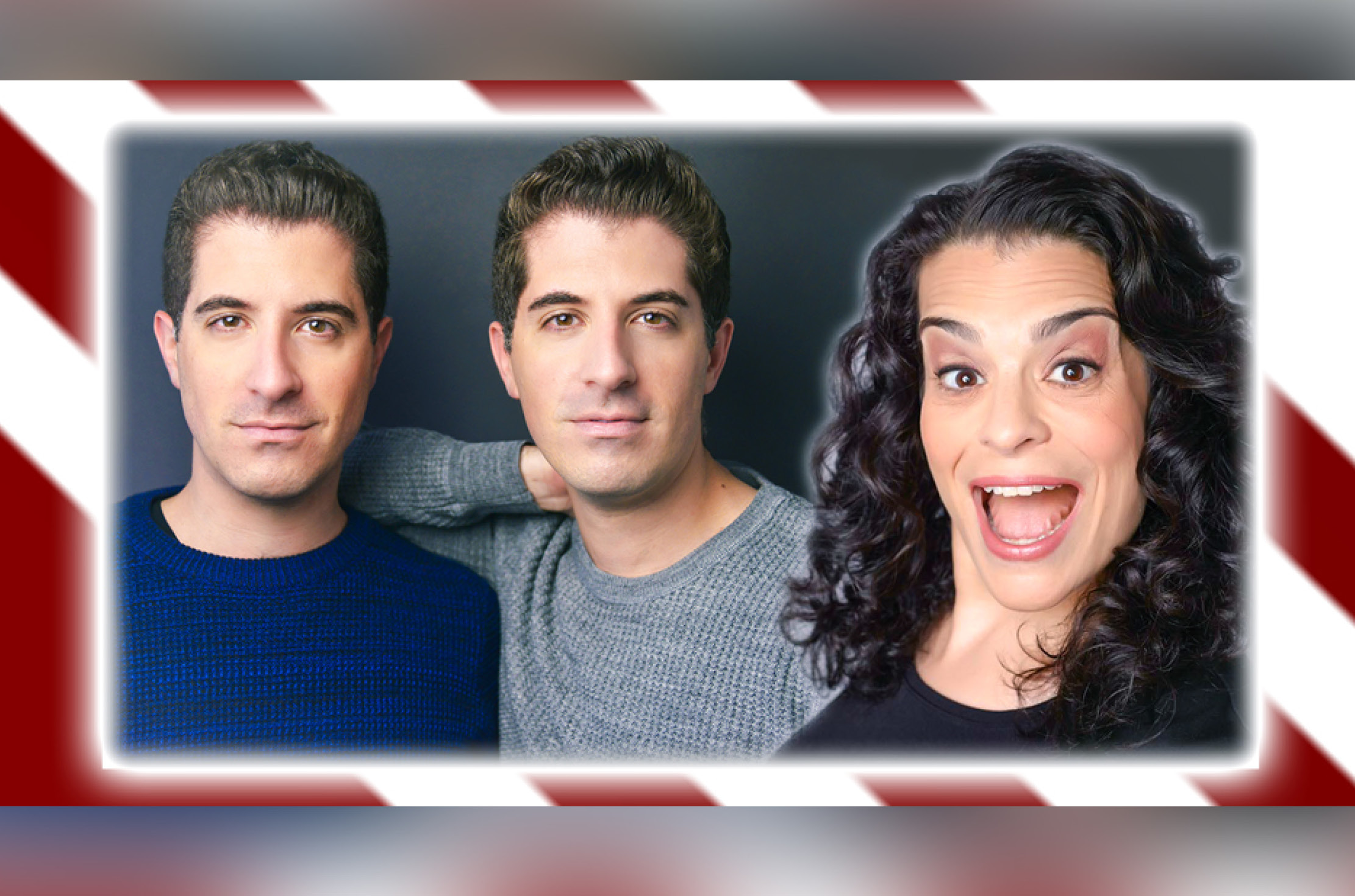 Photo Courtesy of the Broward Center for the Performing Arts

An Interview with Will Nunziata

When you stop and think about it, there are an amazing number of twins in the entertainment industry and I’m not just talking about Mary-Kate and Ashley Olsen. In the world of popular music alone, there is a multitude of twins, including Kim and Kelly Deal (of The Breeders), Robin and Maurice Gibb (of the Bee Gees), Styx’s gay bass player Chuck Panozzo and his late brother John, and Benji and Joel Madden of Good Charlotte, and Lisa and Jessica Origliasso of The Veronicas, to name a few. If you haven’t done so already, add Will & Anthony Nunziata to the list. The identical pair has been making a name for themselves for a number of years in the cabaret and symphonic worlds, as well as the theater. With a full-length album, 2018’s Love Always, under their belt, they continue to perform in a variety of venues, from Singapore to Miami. On December 21, 2019, they team up with lesbian comedian Jessica Kirson for the “The Italian Jewish Christmas Show!” I spoke with Will in advance of the show.

Gregg Shapiro: Will, does birth order have anything to do with the Will & Anthony billing rank?

Will Nunziata: No! If it did it would be Anthony and Will. I think when we were younger and we decided to go after this as a team in a performing world, we felt that Will & Anthony had a better ring to it. Or maybe it was my decision and I just eventually led Anthony toward the light.

GS: So far in 2019, I’ve interviewed gay writers/actors Michael and Zach Zakar, actress/singer/songwriter Jessica Harper, Tegan Quin of Tegan and Sara, and now you, making this my year of twin interviews. Have you and Anthony ever considered covering a Jessica Harper or Tegan and Sara song?

WN: No, we haven’t. Anthony and I are always open to trying out new things.

GS: You and Anthony are known for your cabaret work, but is there a style of music your fans might be surprised to learn that you listen to?

WN: The word cabaret is funny. It’s a word that has been associated with Anthony and me. We love the cabaret community, especially here in New York where it’s so thriving. We’re very fortunate that we’ve been able to do most of our work outside of New York within the symphonic and performing arts worlds. Those audiences, more so outside of New York, are surprised that our interests in music lies outside of Broadway and the Great American Songbook. In the past few years we’ve begun to implement songs in our repertoire that we consider the new American songbook as well as original songs. People might be surprised to know that Anthony and I have very different tastes in music. Anthony is an amazing songwriter. I know that what he is usually listening to on a daily basis is music that will inspire him in whatever genre he’s writing. For me, I’ve been fortunate to be a professional concert and theater director for a bit now. It might be boring for people to know [laughs], but the music I’m listening to these days are for my upcoming directing projects. Trying to live in that world as I begin to cast and stage a project.

GS: In addition to singing, you and Anthony have been praised for your comedic timing and banter. Can you please say something about the importance of humor in your work?

WN: First and foremost, something that we let students know as part of our educational outreach program called Arts Matter!, when we travel the country and we speak with high school and college students, during master classes and talk-backs, we mention the word craft. Anthony and I knew when we graduated from Boston College that we were going to go after this performing thing, we wanted to imbue the everyday brotherly banter that people thought was funny. We wanted to do it right, to learn the craft of it. We went to Amy Poehler’s Upright Citizens Brigade improv school in New York City and studied there for years, learning the art and craft of improv. Our brotherly banter has been there, as my mother says, since the womb, but it was important for us to learn the craft and when and how to implement comedy in our shows. It’s important to us because, as I would say to any artist as a director, when you’re doing a show, it’s important to incorporate your own authenticity. That’s why we do it. Let’s be honest, we need some laughter these days, as well.

GS: In 2018, you and Anthony released your Love Always album. Please say something about the process of selecting cover tunes for the album.

WN: Anthony and I grew up in a household where we heard all the great singers and songwriters of our time. A lot of them created what were considered concept albums with an overarching theme and storyline. Anthony and I felt that it was important in a show-don’t-tell way to create an album that celebrates love in all of its textures and colors. First, we laid down all of the original songs that we wanted to have on the album. Then we found spaces of breath for which we chose the covers. We looked at the song order of the album as if we were putting together a show. We wanted to make sure there was a beginning, middle and end. Those covers that we decided to add spoke to the gaps and breaths we found.

GS: Being an out performer, do you ever change pronouns when you sing a standard?

WN: It depends on the character. We both come from the school of Ellen DeGeneres. I love that she’s an out performer, but she doesn’t make it who she is. Through her just being human and being herself; Anthony and look to that as almost a north star of what it is to be out performers. When it comes to pronouns in songs, I can speak for myself. Each song is its own vignette and character piece. If the character of the piece, not Will, has a need to change the pronoun from the way it was originally written, I’m going to do it. I try to make it more about the character and me as a vessel.

GS: In addition to your work as a performer, as you mentioned you have been making a name for yourself as a director. Actress Cady Huffman, who also appears in your and Anthony’s “The Gift Is You” music video, was directed by you in Miss Peggy Lee: In Her Own Words and Music and will also be under your direction in an upcoming special presentation of Over Here! What is it about Cady that makes your working relationship so special?

WN: I’ll tell you something about Cady. She was the one who opened the door to my directing career. She was the first person whose concert I ever directed. When we worked together, I think she saw the theater director in me. When I put together her show, I did it along the lines of Lena Horne: The Lady and Her Music or Elaine Stritch at Liberty, kind of in that theatrical one-woman concert with an arc and theme. Cady and I have a great shorthand, a great respect for one another. We’re brutally honest with each other. I adore her as a collaborator. She was in the first production I directed, my reconceived version of Fred Ebb and John Kander’s The Act. She sang “Arthur In the Afternoon”. She was one of my four Tony-winning ladies for which I wrote and directed the Cy Coleman review, Our Guy Cy, with Lillias White, Judy Kaye and Randy Graff. Cady was also my muse for Peggy Lee. I called her a year and a half ago. I said, “I don’t even know if you’re a fan of Peggy Lee’s, but I had a dream that she came back in 2019 and had some things to say and some forgiving to do.” She said, “Will, you don’t know this, but in my apartment is a framed photo of Peggy Lee.” I’m not Jewish, but talk about bashert. When it came to the revival of Over Here!, there’s a character who acts as a narrator. But because I’m adapting the show, I thought it was a beautiful opportunity to take some of the ancillary characters and have the narrator also play them. Being the versatile actress Cady is, I built the reimagined character around her. I just spoke to her yesterday. I adore her. As a kid growing up outside of the city, Cady was one of my favorite women of the theater. She was a brassy broad! Getting to know her as a friend, she is one of the kindest, most sincere, loyal people you will ever meet on the planet. I’m so grateful to her for so many reasons, so I’m very happy you brought her up.

GS: Speaking of collaborations, in December, you and Anthony are teaming up with hilarious lesbian comedian Jessica Kirson for “The Italian Jewish Christmas Show!” What is the genesis of the show?

WN: The genesis is that Anthony and I have been such huge fans of Jessica for years. I remember making a trip to the city to see her when we were in college. Even though we’re identical – it’s only the DNA that’s identical – we’re very different. However, after Jessica’s show, Anthony and I were in agreement, in tears, that this is the funniest human being ever. Talk about authenticity, fearlessness, life or death stakes with ferocity and a commitment to truth; this woman is amazing. Anthony and I knew that one day we wanted to collaborate with her and the opportunity came up. We’re excited to be creating this brand-new show just for Florida.

GS: Your brother Anthony is recording a solo album. Do you have one in the works as well?

WN: I look at my directing career as my solo albums. I’m so proud of Anthony leaning into this other talent. I look at what we do as a three-pronged entity. We have the Will & Anthony brand. From it, I’ve been able to learn so much about directing from performing. I look at myself as an actor’s director. With Anthony, being able to write and collaborate with some of the best in the business. He’s such a talented writer. It’s so beautiful that we have this partnership for life in that we’re able to help each other, not only personally but creatively. I’ve asked Anthony’s opinion about certain projects I’ve directed. In terms of arc and storytelling, Anthony has asked my opinion about his original songs. It’s a beautiful thing that we’ve been able to go after our individual blisses, all the while continuing something we know brings such joy to people. We’re so grateful for what we do together.

GS: Finally, the interview wouldn’t be complete unless I offered my congratulations on your recent nuptials. How is married life treating you?

WN: So far, so good, Gregg. I’m so grateful to have a partner in crime. A life partner who is my balance, my biggest champion and my biggest supporter. And me for him. I wake up with gratitude every day and I know he does, too. I look forward to sharing not only all of these beautiful personal moments that we’ll get to share as our family on both sides continues to grow and thrive, but also professionally. Me supporting him and him supporting me. I’m very grateful.

For ticket information, go to www.BrowardCenter.org