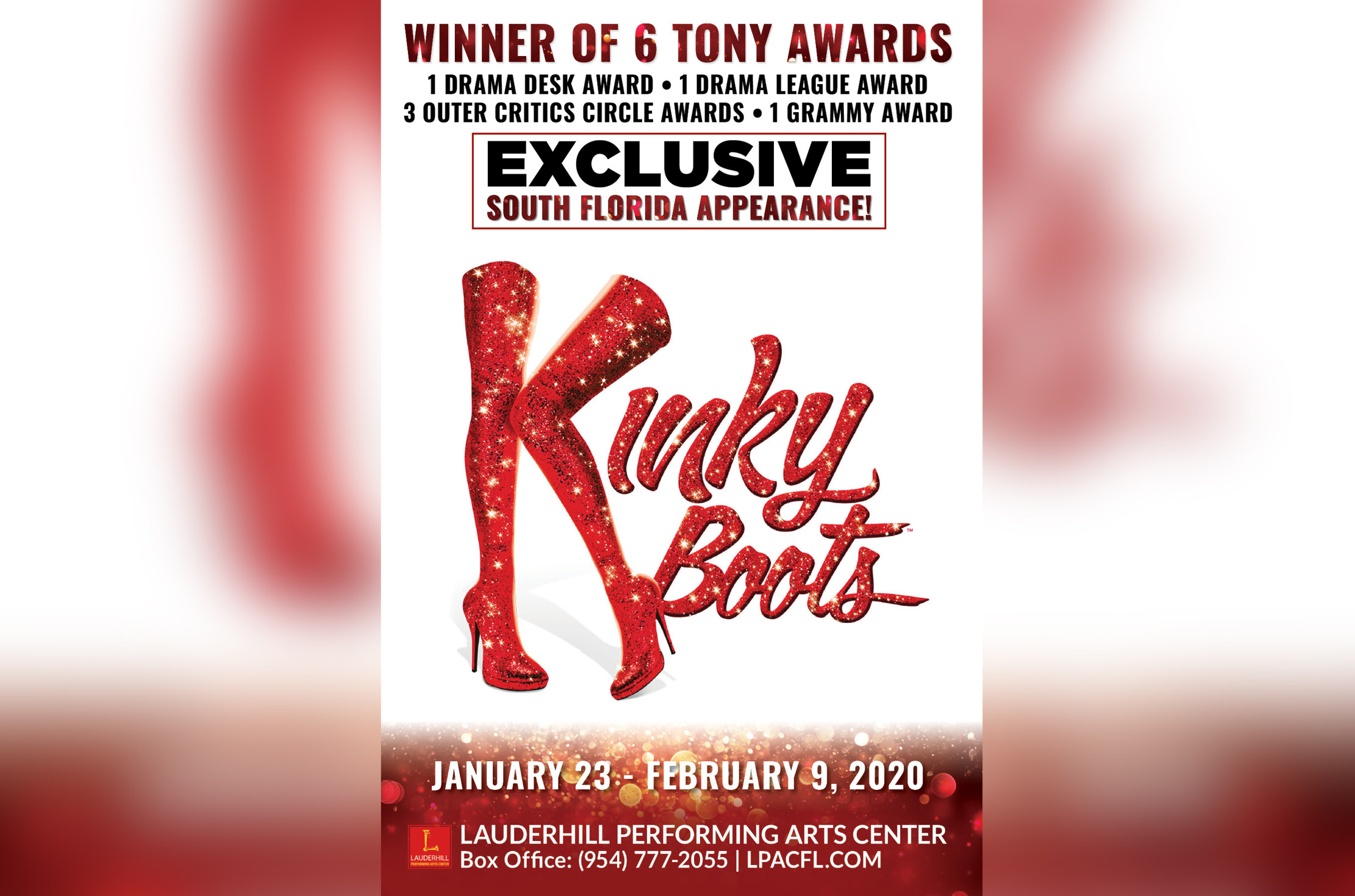 The City of Lauderhill and Prather Productions presents Kinky Boots

Instant Classic. The phrase was created for a work of art like Kinky Boots, and now those boots are kicking their way to the Lauderhill Performing Arts Center (LPAC). South Florida’s coolest new venue is hosting the most fun, heartfelt show to come off Broadway in years.

Two incredible gay icons came together to make this production happen. Harvey Fierstein wrote the story, and the still-so-unusual Cyndi Lauper did the music. With songs like “Hold Me In Your Heart,” “Not My Father’s Son,” and the iconic and quotable “Sex Is In The Heel,” Kinky Boots brings a message that reaches across generations and sexual orientations, class and gender. The story is set in a struggling shoe factory in England, where a son, Charlie, inherits the family business of making plain, old, uncreatively dependable footwear. The situation is too dark to imagine, when a ray of light enters his life in the form of Lola, a fabulous drag queen in need of sturdy stilettos. Charlie quickly learns what we have long known: that fabulous drag queens always make the situation better!

Kinky Boots is a story with heart. A very generous heart for anyone open to experiencing it. The play is about learning that what we think we want, and what we really want, can be two very different things. It’s about family. The family we have and the family we create around us, but mostly, it’s about love. Nurturing the love already in our lives and learning to open ourselves up to love from the unknown.

And, of course, there’s the boots! The costuming in this production is fierce, fab, and flawless.

Cyndi once told me she just wants to make people happy. She has a reputation for being fiercely devoted to her family as well as her fans. Cyndi’s ability to connect one on one with people even when standing on stage in an arena is amazing. She can go from being sassy to bringing tears to your eyes and back to sassy without missing a beat, and that’s just when she’s talking with people in the audience. That kind of genuineness comes through in her music for Kinky Boots.

LPAC is bringing in Lola and company via Broadway World. The new building, with its state of the art facilities, is perfect for hosting a world class touring company. A show like Kinky Boots is a natural fit for this venue. Small enough so even the far away seats feel close enough that you feel like you’re intimately intertwined with the story.

For tickets or more information about Kinky Boots or any of the other events coming to LPAC, check out their website: www.LPACFL.com or call (954) 777-2055.

Brian Varela Takes Us to Church in Altar Boyz