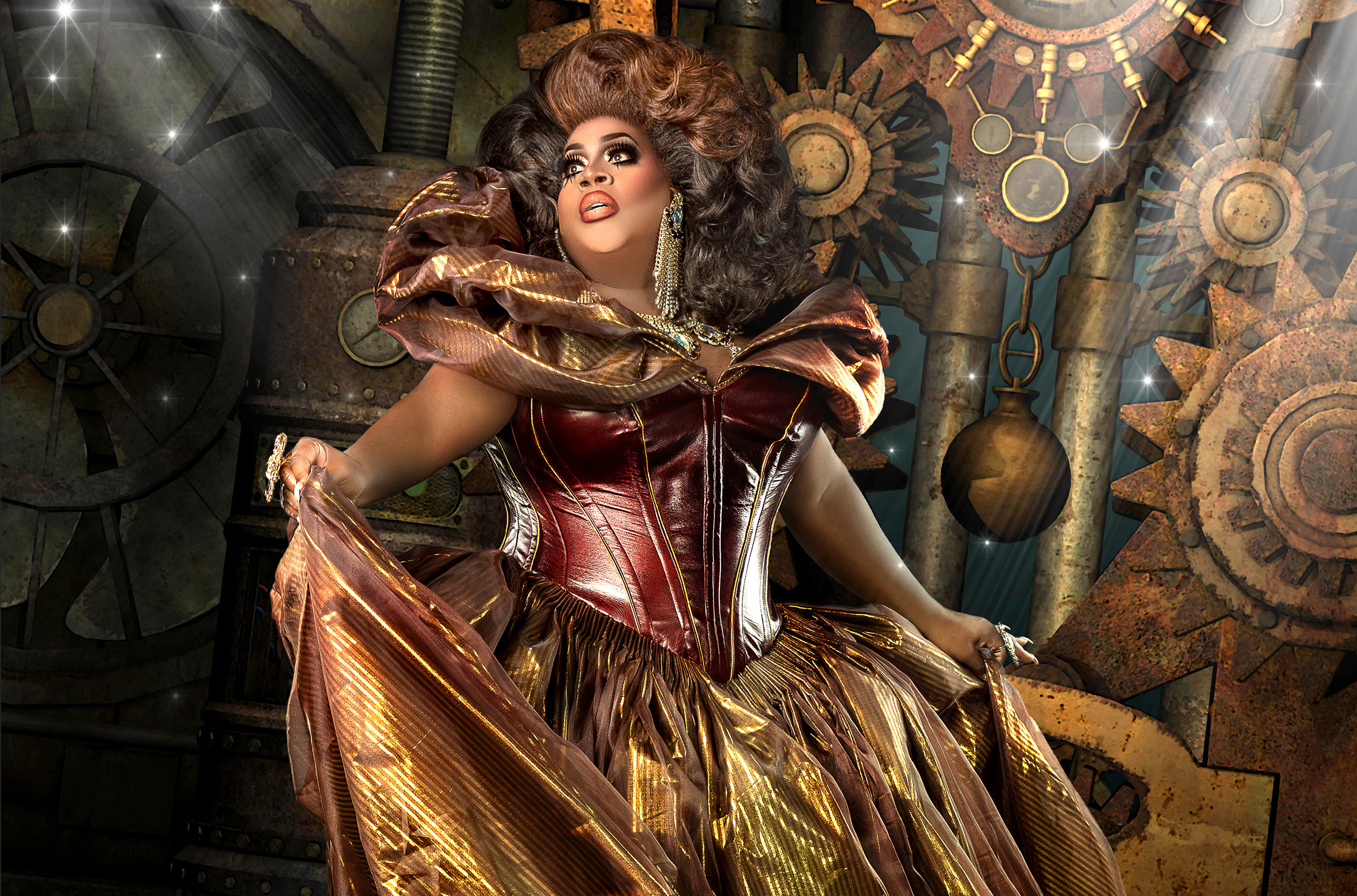 An Interview with Latrice Royale

In her own words, Latrice Royale (aka Timothy Wilcots) is “large and in charge, chunky yet funky, bold, and beautiful,” and no one else could have put it better. Remembered for her appearances on season four of RuPaul’s Drag Race and the first season of RuPaul’s Drag Race All Stars, Latrice Royale is here to stay. The Compton, California native and South Florida transplant, paid dearly “for some bad choices” that resulted in her incarceration in the early 2000s. Compelled to remake herself “into a stronger, more dedicated individual,” a decade after her release, through her strength and determination she is showing the world who she is in her personal, one-woman show Here’s To Life, playing February 1, 2020 at Aventura Arts and Cultural Center, at which she will be accompanied on piano by her husband Christopher Hamblin. Latrice was gracious enough to take time from her busy schedule to answer a few questions for OutClique.

Gregg Shapiro: Latrice, you have been living in South Florida for 20 years. What was it that brought you to the area?

Latrice Royale: I have been in South Florida for 28 years. I initially moved here to pursue my passion of color guard. I came to South Florida to audition for a world class team called “The Alliance of Miami” and that was in 1992. One of my best friends, Daniel, had asked me to come spin with him and I promised I would, and “aged out” with him, so I moved to Florida.

GS: For those not in the know, how did the name Latrice Royale come to be?

LR: Well, Latrice, was a childhood friend of mine and she was a beautiful little black girl who had the most perfect hair. It was wavy and long. She was really pretty; she was my little bestie. So, when I went to do my first drag show, they asked me my name and I just said, “Latrice,” and they were like, “Latrice, what?” and I didn’t have a last name. But my friend Matt was with me at the time and he gave me my last name. He was like, “What about Royale? Like fudge Royale? You’re chocolatey.” And so [that’s how] Latrice Royale had came to be. God bless, Matt.

GS: It’s been a couple of years since the closing of the Palace Bar on Ocean Drive in South Beach where, according to the Miami Herald, you were the “bar’s reigning queen.” What is your single fondest memory of the Palace?

LR: [Laughs] well, now. I was the reigning queen of the Palace? That is news to me, but thank you [laughs]. I have the most wonderful memories of our Christmas times at the Palace. It was magical. We were such a family. We would really come together and have a staff Christmas party. We exchanged gifts, laughed, ate, and shared stories. It was just magical, and I really, really miss that. It was the first time I’ve ever been a part of the cast and felt like a family.

GS: As a past winner of the Mr. & Miss Pride South Florida Pageant, what’s the best piece of advice you were given regarding competing for the title, and what advice would you offer someone who wanted to compete?

LR: I was told by a very wise woman, don’t tell anyone that I was competing and to show up, and do me. Just give them me, one hundred percent. At that time, I was having a hard time with pageantry because I was kind of more of a club kid, so when I brought that full force into “Miss Pride South Florida” it really served me well and I won. That was 2004.

GS: You were recently performing in New York and Provincetown. What were those experiences like for you?

LR: I had an amazing time in New York and Provincetown. I actually got my cabaret legs in New York City at the Laurie Beechman Theatre, so it was nice to return and try out some new material and get the band back together. I just felt at home and it was wonderful. It was my debut in Provincetown and I didn’t know what to expect because it was a different culture than I’m used to and a different rhythm than I’m used to, but we adapted pretty well; and the shows were amazing. Considering the time of year that we played, we did remarkably well and were well received. They’ve already invited us to come back. They were both lovely experiences. I can’t wait to share and bring this show home and really showcase how far it’s come since the workshop that we did in Fort Lauderdale a few years ago.

GS: What can you tell me about your one-woman show Here’s To Life, which you describe as your “other musical adventure,” and which you will be performing here in South Florida?

LR: This show is a real labor of love. It really is where it all began, and that’s here in South Florida. That’s where Latrice was born, so my whole entire adult life has been here. So, there’s a lot of history and it will be a lot of fun to reminisce and really connect the dots. To landmark where they are and recognize that I am where I am because of where I come from. The show is really healing; it’s so necessary, especially in these times because we need to really be more in touch with who we are and what our purpose is here on this earth. It’s a wonderful way to connect and get some closure on some things. New understanding on things and feeling like you can conquer the world. If I can do it, you can do it.

GS: You have both a personal and professional relationship with your husband and musical accompanist Christopher. What’s the secret to making both these aspects work for you and him?

LR: This is all about balance, communication, and love. We work really hard on trying to maintain that balance, boundaries, and knowing where we’re coming from at all times, so there’s no misunderstandings. If there are questions, we ask the questions and talk about things so that’s number one, key. You have to keep those lines open. It’s not always easy and you’re not always in the mood but you have to do it. That’s what makes us work.

GS: In addition to performing, you also created L.R.I. Talent & Management. Please say something about the necessity of doing that and what it’s like to be working from that side of the business.

LR: I’m old-school and I am self-taught. I’ve always been a firm believer that you need to own everything with your name on it. I really created L.R.I. out of the fear of being taken advantage of and people just doing me wrong and having everything I’ve worked hard for taken away from me. I wanted to protect myself. There were other girls like me, who also needed and felt the need to be protected and that’s what I did it for. I know I’m an honest person and I’m always the one that’s been fighting for the girls and making sure they’re treated fairly and getting our just desserts.

GS: In February of 2019, an interview with you ran in USA Today in which you talked about your experience as an ex-felon and your work in the restoration of voting rights for former felons. Please say something about your dedication to the cause and what the results have been.

LR: Obviously, this is very near and dear to my heart, because I was affected by this law and during that time I didn’t have a voice of my own. The only thing I could do was ask others to advocate for me and speak for me. Make something happen, make change happen. My dedication to just being myself and speaking out. I made a post and people heard me and so I don’t want to say that I was the cause, but I feel like I did my part in that it made a difference. And that felt great but it’s only the beginning. Now I’m awaiting to see if I’m a registered voter.

GS: How would you rate the impact of a show such as FX’s Pose, as well as Billy Porter’s win at the Emmys on September 22, 2019, on you personally and the culture at large?

LR: Billy’s win was a win for us all. It’s just amazing. It’s his time. Kudos and congratulations. He really is the heart and soul and the heartbeat of that show. I’ve never seen him better. As far as the impact that the show has had on the community is so necessary and has been such a welcome thing to happen because now these young people who had no clue of where we’ve come from and what we’ve been through [now know]. They’re now seeing it live and reliving it. Some of it’s hard to watch for those who’ve been through it. However, it is so necessary for these young kids to see what it used to be like and the reason why they are where they are, is because we’ve been fighting all these years for equality and to feel like human beings.

For ticket information on Here’s To Life go to www.aventuracenter.org.  February 1, 2020, Aventura Arts and Cultural Center.