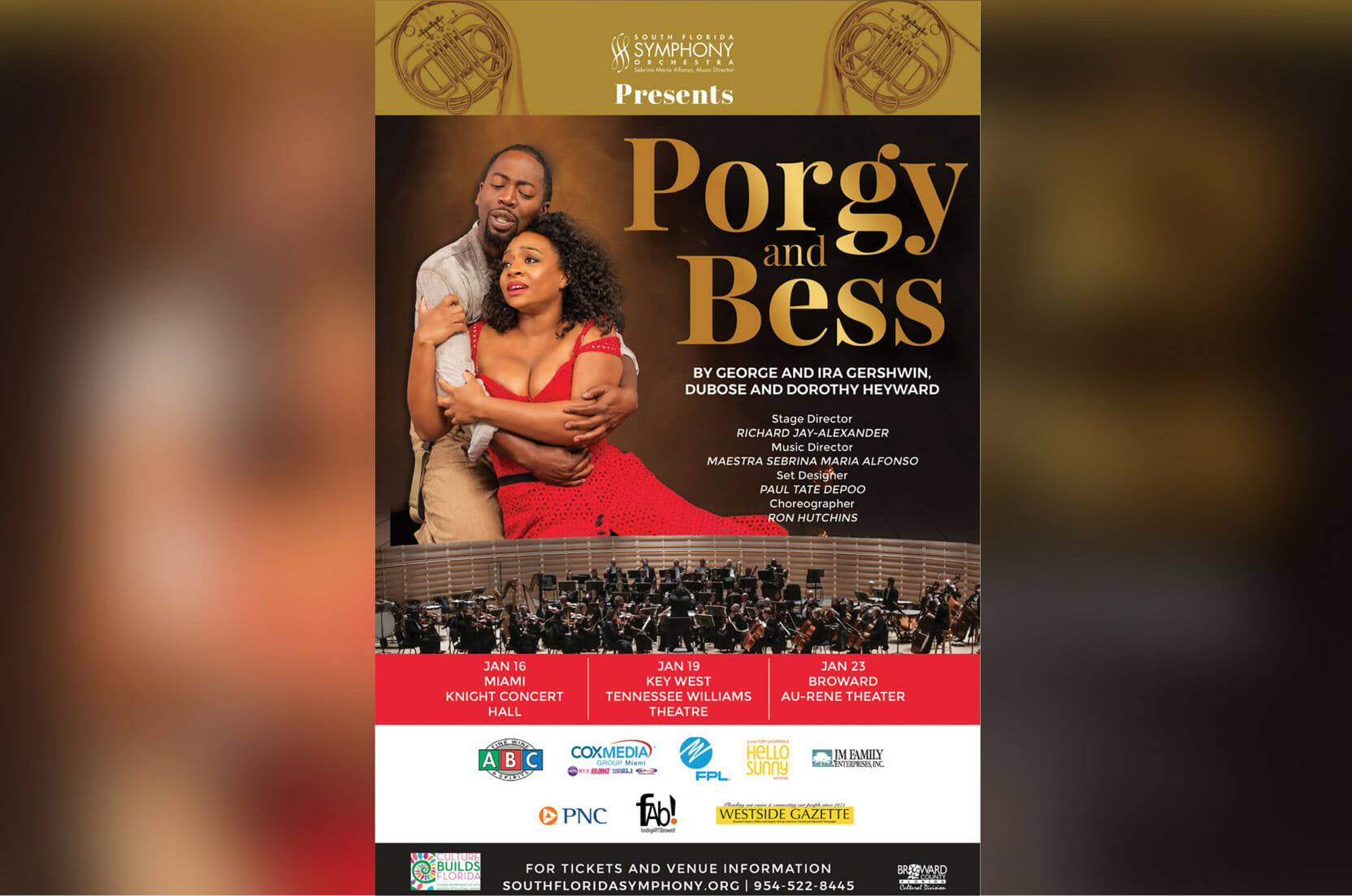 The South Florida Symphony Orchestra (SFSO) is bringing audiences one of the best known and most frequently performed operas – George Gershwin’s Porgy and Bess. The story of a disabled black street beggar named Porgy living in the slums of Charleston, this show deals with his attempts to rescue Bess from the clutches of her violent and possessive lover, Crown. Porgy and Bess has a star studded all-black cast presenting a bold mix of modernist classics, ragtime, blues, jazz and spirituals. Playing the leading role is Neil Nelson, a South Florida baritone who is no stranger to the show or the SFSO. Previously playing Jake and several other smaller roles, this is his first time playing Porgy. I had the pleasure of chatting more with Nelson about the upcoming performance and his overall love and passion for this Gershwin classic.

Every time you work with the SFSO, what do you look forward to the most?

The sound. They sound great and the players are wonderful. The camaraderie is so much fun.

Where did your passion for performing come from?

Wow, that is a good question. I have always been fairly extroverted. I wouldn’t say I was a shy kid. I had a great music teacher in high school. She was amazing and included all the athletes in her chorus. She would get us excited about performing. I would say it started with my high school music teacher.

Tell me more about your character, Porgy. How do you relate to him?

I guess the first thing I can say, any character I play, they all go through the human experience. We have all felt loss, gained love, happiness, sadness. In that way, I connect for sure. I have been down the road of having love lost, like most adults have, so I guess I connect with him in that way. There have been times in my life where I have been the underdog and ended up being the champion. Those are ways I can think of off the top of my head.

What would you say is the biggest challenge of playing Porgy?

It is a vocally challenging role because of the way it is written. The role is described, you start out as a bass and by the end of the opera, you are a baritone. So, you have to sing a pretty wide range. There is also the fact you are playing someone who is disabled. There are different ways of playing it and we are still working it out, but most of the time, Porgy is on his knees throughout the whole opera. So, this role is challenging both physically and vocally.

What can audiences expect from this performance?

Audiences can expect great music and great drama. It is such a great story. The American love story. There are so many aspects of life in this show. You have people who are the religious type people, you have the party people, there is a situation where a battered wife is involved. She’s not married, but it’s basically battered wife syndrome to a certain degree. It is argued that Crown is a villain, so to speak, but he’s also a member of the community. There are so many different relationships and I think the audience will expect to see facts of life that they can relate to in so many ways.

Have you always been a fan of George Gershwin?

Oh, as long as I can remember. I didn’t grow up as a classical musician, but who doesn’t know all the famous tunes Gershwin wrote? There were times I would hear some of his stuff and not even realize it was him. So, I have always been a fan, I just didn’t know it in the beginning.

What is the number one lesson you hope to learn throughout this experience?

I am still learning, but definitely pacing. You have to pace yourself vocally and physically. It takes a lot, especially if you are going to be on your knees singing.

Well, to say that I performed my first Porgy, it’s great to have that under my belt. I also hope to grow into this role and I look forward to the fellowship this role brings. As an opera singer, I am quite often the only person of African descent in the room. That does bring about a sense of pride, but with Porgy, you get a lot of talented opera singers of African descent that you almost never get unless you’re doing Porgy and Bess.

Do you consider Porgy and Bess to be a controversial show?

No, I don’t. I guess some people do and we have to acknowledge that, but I don’t believe it is. It’s not centered around any particular thing I would consider to be a controversial issue. Anyone can pull controversy from any opera or show.

So, this show is still relevant for today’s time.

Absolutely. I feel it is totally relevant. Just like any story that has love gained or love lost. Any story of unfair treatment or redemption. It’s relevant.

Lastly, what’s next for you after Porgy and Bess?

Immediately after Porgy and Bess, I’m singing with the Palm Beach Opera as Masetto in Don Giovanni. Immediately after that, I am flying to St. Louis to sing Oroveso in Norma by Vincenzo Bellini.

For more information or to purchase tickets, visit SouthFloridaSymphony.org or BrowardCenter.org.